The one thing for which I am very grateful about my growing up years is that I grew up with music.
Being the granddaughter of show biz folk and the daughter of a wanna be pianist, who taught himself to play (at parties, he would put on a pair of oversized ears and tell people that he played "by ear."), I can't remember a time when music was not a part of my life.

My father loved the pop music of the 30s and 40s and our house was filled with the records of Bing Crosby, Perry Como, the Andrews Sisters, Dinah Shore, and all the other bands and singers of the era.  He was particularly passionate about jazz, so I grew up knowing Art Tatum, Count Basie, Artie Shaw, Louie Armstrong and a host of others.

My mother liked the more pop tunes and the radio always had some pop station on, and it was on all day long (when she wasn't listening to soap operas).

Theirs was a party house.  When my mother decided to become a Catholic, the religious instruction came with a built-in social network of couples who rallied around "Father Joe," who eventually baptized her and remained her friend until his death a couple of years ago (he buried my sister, my father, and my son David).

Father Joe was an Irish tenor, had a great voice and loved to sing.  So all of Father's parties came with lots of singing.  Our house was a favorite place to have them because they could roll up the rug in the living room and dining room and my father could play the piano all evening while people danced.

(I'm so glad I have those memories, because they are some of the most pleasant of my childhood.)

As a child I learned almost all of the popular songs of the day and could (and did) sing along with the group whenever there was a sing-along.  The songs I learned went up to the late 50s, but once rock 'n' roll took hold, my lyric learning was hit and miss, the most consistent lyrics those of musical theater.

My mother's second husband was not a music guy.  He liked music, but it was never as pervasive as it was in the day of my childhood.  My mother didn't really sing any more because the "white noise" of music playing in the background bothered her, but I fixed up a CD for her to play when she and Peach and I went to see the old ranch in Valley Springs.  She was first upset that I would be playing MUSIC when we were going to be driving, but when she heard those songs that she had loved so much, she got into it and we all sang all the way to and from Terra Linda.

One of the things there is a lot of at Covell Gardens is music.  There are the sing-alongs every Tuesday afternoon, led by Judy Boock-Davis, David's old kindergarten teacher, with accompaniment by dear Ida Sue, who used to be a very good pianist, I am told, but she is 95 now and she has had a couple of falls and now finds it difficult playing chords, so mostly we get one-finger accompaniment.  We've seen the Davis Banjo Band and a guy playing solo banjo, accompanying a tape of piano music.  On the 4th of July there was a patriotic sing-along, accompanied by a "real" pianist. I missed the father and daughter piano-violin duo and a violin concert.

I make sure my mother gets to all of these musical events.  At first she went grudgingly, but now she seems to really enjoy them and sings along with the group, remembering all the words and not needing the lyric sheets.
This week we went to a Klezmer band.  I love Klezmer music, though usually leave feeling like I've just seen Fiddler on the Roof without dialog!

This was a small group of viola, accordion, drum, cello and clarinet,   It was fun in the way that Eastern European / Jewish music is ever fun.   Always that sense of melancholy interspersed among the lively passages.

But the clarinetist was kind of weird.  He sat, he stood, he changed positions, he walked around the lobby, all the while playing.  I never did figure out why he needed to move around so much. Maybe he, like my mother, is dealing with back problems.

The cellist had a round face and a pink complexion and his jowls quivered whenever he got to energetic passages.  He was fun to watch.

The woman on the accordion was a woman whose name I have heard for decades around Davis, as she has mine.  We talked a bit and I friended her on Facebook, after which I discovered that we share lots of mutual friends, like Ellen and Shelly and two of the medical people I worked with at Women's Health.

Today when we went to bring my mother home, after our trip to the bank and lunch out, we were going to just go home but The Psychiatrist's car was there in the parking lot (it has a personalized license plate, which I recognized instantly) and I went in to see if he was around (he was not).  However, he plays with a folk music group and I hope that one of these days they will be the entertainment in the front lobby!

While I was listening to the klezmer band, I got this idea for an article for the newspaper, but it will take several more of these front lobby concerts before I can really get a handle on what I want to do with the idea. 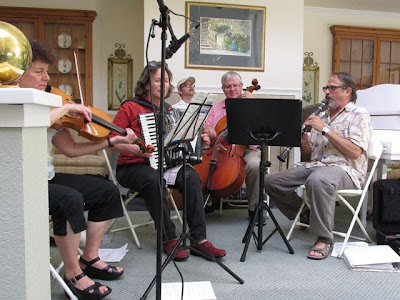