My life is complete.  I have read "Joe the Bear and Sam the Mouse" and "I'm Suzy" to my granddaughters...and they liked the books.  I'll probably never see them (the books) again, but I can die happy now.

The day started off here at home.  Norm and Olivia were heading back home themselves but Olivia wanted to give Alice Nan one. more. lesson in how to use her iPad.  It was a group effort. 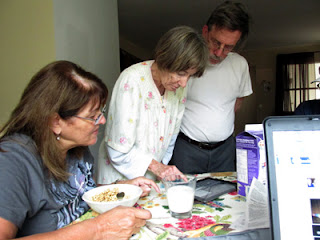 After that, Joe went off to play golf with Tom and a couple of his buddies.  When they were approaching the 16 hole, Joe texted Alice Nan and we all drove up to see them play the last hole. 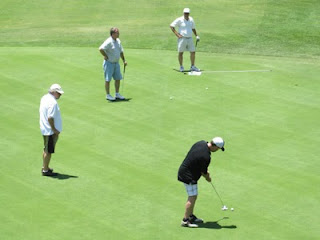 Then we sat around and chatted for awhile, over drinks, before Tom had to leave to go pick up medicine for Brianna's still swollen hand (from her insect bite on the beach yesterday) 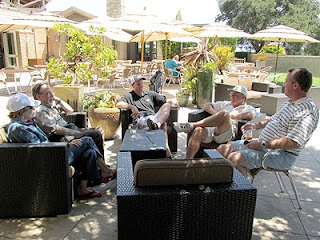 We came back to the house to wait for the "all clear" from Tom, that indicated nap time was over.  While waiting I took a nap myself.  Finally, at around 4:30 Tom's message came and Walt and I drove over there, new/old books in tow. 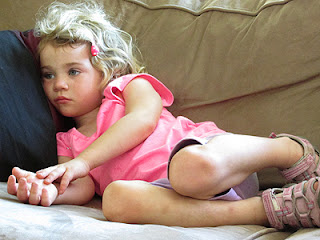 Her hand was swollen and discolored (which doesn't really show in this picture), she was on Benadryl and all she wanted to do was watch videos.  It was understandable.  I tried showing her that I had brought a new book, and she was mildly interested, but Laurel insisted that the girls needed to get outside and play and Bri went outside with her mother.  I put the books back into the envelope I had brought them in and decided to try later.

At some point, Bri went back into the house and came out looking very guilty, holding something behind her back.  I knew instantly it was one of the books and got up to walk next to her, seeing that she was sitting on Joe the Bear.  I asked her if she wanted me to read it to her.  She said yes.  She had me read it to her twice and it was such fun adopting my deep Joe the bear and high pitched Sam the mouse voices again.  Then she had me read "I'm Suzy," which she also liked.  Finally I read "The Sheep of the Lal Bagh," which I wasn't sure she was old enough for, but she listened, asked questions and seemed to like it.

It was the day I've been waiting for for about 30 years.  And it was great.

The girls raced around the yard, harvested a tiny tomato out of Bri's garden, and Laurel took pictures of us, with Suzy, which I had read to Lacie earlier. 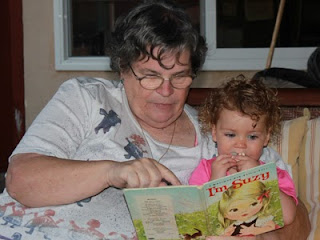 Then it was time for the girls' dinner.  When they finished they were allowed to have a little chocolate cake and a little ice cream, left over from yesterday's picnic.  I went berserk taking pictures of Lacie, each cuter than the other, as she got more and more covered in chocolate.  I will eventually post them all, but for now here is what I call the "chocolate deodorant" picture. 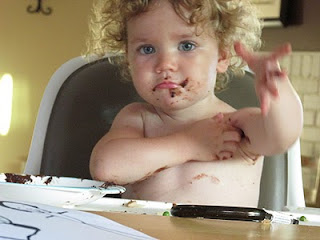 Needless to say, she was desperately in need of a bath. 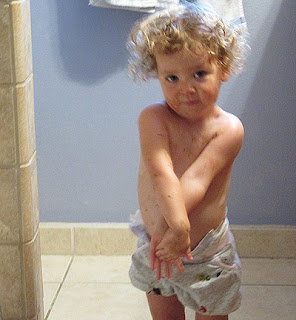 Laurel let the girls draw for a bit before bedtime and Bri made an interesting family picture. 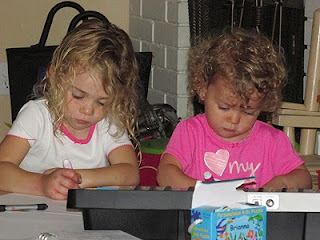 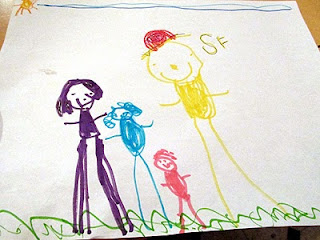 She drew everybody in their favorite colors, and Tom was in 49er gold and red, with a 49er cap on his head.
After the girls went to bed, Tom cooked dinner for us, fajitas made out of leftover tri-tip roast from the BBQ yesterday.  He's an amazing cook. 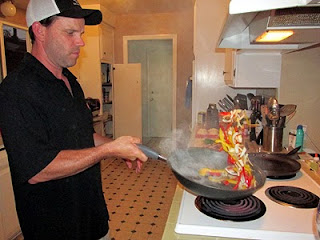 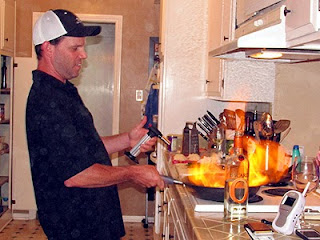 Not the best picture of the flames (which were pretty spectacular), but you get the idea.

We came home after dinner.  I felt again like it had been a wonderful afternoon with the girls and am going home with my Grandma needs fulfilled, probably until Lacie's birthday in October, since I think that will be our next opportunity, what with trips and all for all of us, to see them. 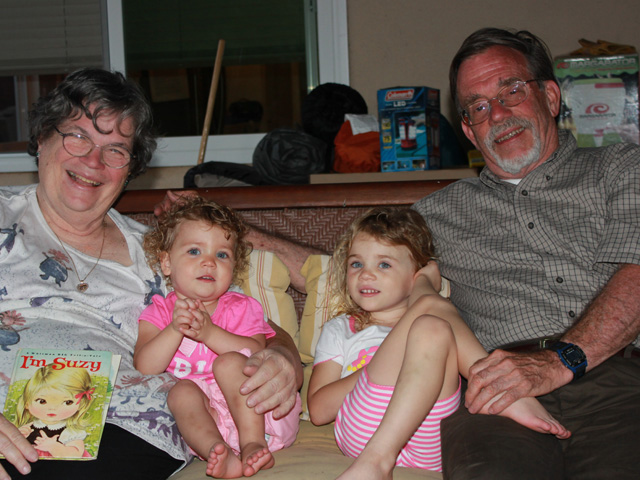 Reading to kids is great -- one of my best memories of having small children. But even better is when they read back to you, and then you know that they are prepared for life.

My son does the voices better than I ever did; he reads to the girls every night.