Oddly enough this is not an entry about my mother.  But it is an entry about a lot of crap.  And about the detritus of a lifetime and the value of "crap."  My mother wouldn't understand it, as she seems to give no sentimental value to anything.

Walt and I rolled into Santa Barbara around 5 p.m.  Norm and Olivia had arrived yesterday and the activity for today was to sort through all the stuff in their mother's storage unit so it could be closed finally. It really did take everyone to be there to go through the boxes of knick nacks, photos, clothes, and...as my mother says..."all that crap." 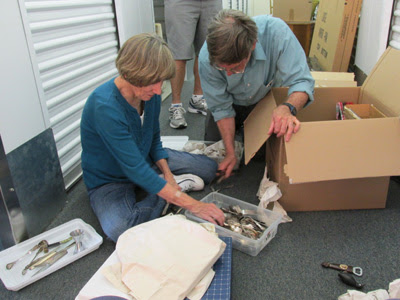 They really had to go through everything with a fine tooth comb.  This box, for example. was filled with silverware, which nobody wanted, but within the pile was the silverware set that Alice had when she attended St. Mary of the Woods college, which had to be monogrammed with her initials...and Alice Nan wanted that, so they needed to go through every piece of silverware till they found the right ones. 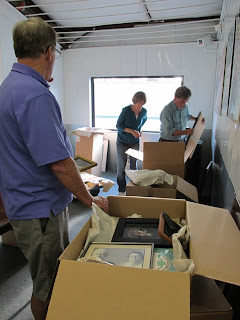 I really didn't think we would be taking much of her stuff, but we have a surprising number of boxes to try to fit into our car.
Mainly I wanted a drop-leaf table that is just perfect for my mother's apartment, at least until her stepdaughter comes with the table she promised to give her.

We have to take Alice's table apart to make it fit in the car...and we have one box that is so large I'm not sure we can make IT fit at all, plus a couple of other boxes.
Most of what I took were framed photos.  I haven't figured out if I am taking them for the framed photo or for the photo frame, which I will decide when we get back home again, but I took many more than I expected.

It was a fun afternoon, an emotional afternoon, and a profitable one too, as when they finish emptying the unit. they don't have to pay the monthly rent any more!

We came back to Alice Nan's house for dinner.  Joe's sister Joan is here too, so it is a full house.  Their mother has Stage 5 Alzheimers and as Joan and I compared notes, it seemed like my mother is mimicking Evelyn all the way, just a bit behind her.

After dinner, we played a rousing game of Apples to Apples, a card game where each player chooses 7 cards, each of which has a "thing" named on it.  The "things" are as diverse as :  Audrey Hepburn, a fat bastard, the World Series, cuss words, Simon Cowell, World War II, polkas, making the bed, and Yoda.  A definition is drawn from a second pack, like "puffy" or "insecure" or "regal" and it's up to the judge for that round to pick which "thing" comes closest to matching the definition.

It was VERY funny and fun...especially since I was playing it for the first time...and won.  We ended the game at 12:30 a.m.  Now all are asleep except me and I hope to be there myself soon.

BTW, Funny the World has apparently been acting strange today and some people have been unable to connect to it.  If you had problems, can you drop me a note in the guestbook section.  Probably not a darn thing I can do about it, but I'd like to know how many were affected.  I could get it on my phone, but not on my iPad and at first not on my laptop, but then I could get it on my laptop.  Whether this actually gets POSTED tonight is going to be interesting.

(Later:  It posted just fine but I couldn't call it up after it posted)
Posted by Bev Sykes at 1:13 AM