I lost my mother today. I found her again, but it was strange to get to her apartment mid-morning, long after she would have finished breakfast and to have the apartment empty.  I wasn't sure where to look for her, but hoped that maybe she had gone to my friend Peg's apartment to see it.

I waited for about half an hour.  Tried to take a nap (unsuccessfully), watched a bit of TV and checked to make sure she wasn't passed out on the floor in the bedroom.  Finally I left her a note saying I was going to Costco and would stop by later.  I also reminded her about her hair appointment at 1:15, and I left.

When I got home from Costco, I called her and she was there.   She said she had gone down to the game area to work a puzzle.  Another Yay from me....she is finding things to do that don't involve just sitting in her apartment.   This is very good.  I told her it was too late to visit her right then, because her hair appointment was in 20 minutes and that I decided I would skip coming to see her today but would see her tomorrow.

She is settling in.

Before stopping by Atria, I went to Blood Source for my regular blood donation.  What a disaster.
First, I think the girl who checked me in had never done it before.   She started out asking me for my birthdate because she couldn't read it clearly on my driver's license.  I gave her the date and the very next question she asked was "what is your birth date?"

She handed me a two-sided list of medications and instructions I should read, even though I've been donating blood for >10 years and the list hasn't changed.  Then she left me to answer all those questions that would disqualify you.   Everyone else who checks that list does it in about 2 minutes, stopping to ask me where I have been out of the country.  She read every question and checked my answer to see if I had answered properly.

When she got to the travel question, she had to check every single country (Russia, China, Germany, Hungary, Austria, Slovakia, Netherlands) in a book to see if, for example, Germany was an OK country to visit and still give blood!  When I told her I had been to Hungary, she asked which country Hungary was in.  When I told her that Hungary was a country, she asked me how to spell it.

Either she was extremely annoying or I was just in a bad mood and not ready to help someone trying to learn her job.

Then we moved on to the actual blood donation area and she turned me over to the staff there.  About five years ago, the regular staff at this location started to rotate.  It used to be everybody knew me by name when I walked in the door and we got caught up over the needle.  There was never a problem drawing blood, and my blood flowed so fast that I filled a bag in about 5-10 minutes.  They say that the blood flows faster if you drink a lot of water, but I drink gallons of water, so I never go on a "force water" program before I give blood.

Once again, the woman taking my blood was someone I had never seen before.  She kept up reassuring talk, as if to calm me down, as if I'd never done this before.  I could tell just from looking at the needle when she stuck it in that she had not done it right.  It always goes right in, the blood starts flowing immediately, and in no time at all, I'm munching cookies and drinking more water.   But she had to wiggle this one around (which stung) and eventually got the blood to start to flow, but she couldn't let go of the needle or it would stop again.  Each time she moved it just a little, I winced.  She had to get someone else to come and take blood samples to submit with the bag of blood.

The blood slowed and then, when it had reached the maximum time allowed for them to take your blood, she had to stop with only a partially filled bag.   This is the second time this has happened, both times with someone who was a new face to me and who had difficulty hitting the vein properly.

I'm actually considering whether I want to take a break from donating blood for awhile.  I will next be eligible when we are in Ukraine, so I could not make a future appoiintment today, but given the bad experiences I have had the past two years with people I don't recognize and who always have problems taking blood, where the old crew never had a problem, I am more reluctant to try again.

It's very depressing to watch her pack up a bag of my blood and tell me it would be discarded.  What's the point of that?

But the day wasn't a total loss.  I picked up the jerky treats that our dogs like at Cosco.  They cost $6+ a box and until next month they are on sale for $4 off, which means I got each for $2+ (limit of five per customer).  I may go back in a week or so and buy 5 more....  (or send Walt so there won't be any impulse buys on the bill!!) 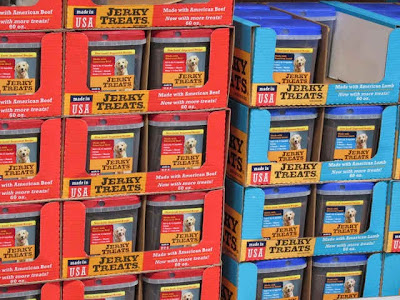 Email ThisBlogThis!Share to TwitterShare to FacebookShare to Pinterest
Labels: donating blood, My Mother

Please don't begin a post with "I lost my mother"!

You must make a complaint to the management of this particular blood drawing center, to the highest manager you know.

Point out how long you have been donating there and how poorly you have been treated. Sometimes staff needs to be retrained before continuing to work on the public.

Personally, I would stop donating there (or at least threaten). I can't donate any more, as I am now too old and have health issues, but I am not above playing the age game. "Are you telling me that you no longer want senior citizens? That will make interesting publicity."

You see just by her asking what country Hungary is in shows me that the educational system is going downhill fast ....yes I would complain to the management and the director of that facility . I think it is ridiculous that you have been going there for so long and they still have to ask you those stupid ?s. I hope you feel better today .

John has been donating blood for probably over 50 years. There is no age limit on donors here. He's going to have to stop though, since the cancer has recurred and he's getting medication.