In Search of Fog

When the temps creep toward 100 in the valley, the wise people head for the coast and hope for fog.  Fortunately for us, Susan had come to town, hoping to escape the heat of Texas, and she was as eager as we were to head for fog
.
Susan is a member of our Photo a Day group on Facebook (a group with which I have been quite lax of late and promise to do better in the future!).  She came to town about this time last year and we had a great time riding a dinner train and taking pictures in Davis.   It was so much fun we decided to repeat the adventure.

She flew in to Sacramento, but is actually staying with Dawn, another member of the group, in Modesto, south of Sacramento.  The two of them, myself, and Anne, who lives in Davis, were the only members of the group who were free to go exploring today, so we set off for Pt. Reyes Station, about an hour and a half from Davis.   Anne and I drove in my car, while Susan and Dawn drove in Susan's rented car.   We had cell phones to find each other once all four of us had arrived.

Pt. Reyes Station is a familiar place to me.  My grandparents lived in nearby Inverness and many of my cousins spent a lot of their growing up years there, living in houses built on our grandparents' acre of land.  There is where Peach and I forged a friendship in a big tree, eating apples and baring our souls to one another.  It is where, in her later years, my cousin Shirley lived, so that when she died several years ago, they closed down the Pt. Reyes Farmers Market so that we could have a memorial service inside, complete with the services of a medicine woman, as Shirley felt very close to the Native American culture.

Anne and I arrived first, hoping to go through the small book store in town, but it was closed until 10 a.m., so we went to the little bakery next door.   It appeared to be popular.

We each bought a sweet and I got coffee, while Anne had juice and we sat outside next to a very chatty guy, who looked like an aging hippie type, who said he was 77 and had lived in Inverness in the 70s and 80s, then had moved to Canada, a country he loves, but can't become a Canadian citizen because of his checkered past.

Eventually the book store opened and we enjoyed looking at all the books.  If it hadn't been a new boook store, I would have felt I was on a busman's holiday!

Susan and Dawn arrived not very long after the book store opened and we started walking around the tiny town of Point Reyes Station.  We started at a foot court where they sold artisan cheeses and we checked out some special cream cheese that was aging in the cheese making area.

There's not much to see in Pt. Reyes Station, so we decided to head out to the ocean.  It was a bit too soon after the sweets Anne and I had eaten, so we figured we would see about eating at the cafe on the beach.  But first we wanted to see the Pt. Reyes Lighthouse.

The parking lot is half a mile to the ranger's station, which is another distance to the light house overlook, but fortunately Anne has a handicap placard, so we were able to drive quite a ways in and save ourselves the walk.

It was very, very foggy.  I loved it, though Susan, not dressed for cold, was silently cursing her lack of a jacket.

When we stopped to investigate some orange lichen on the rock face, this guy happened along.

Susan asked him if he would take our picture and he did (see Photo of the Day).  He then gave us his card and invited us to look at his pictures. Susan commented that everywhere she travels, she meets interesting people. 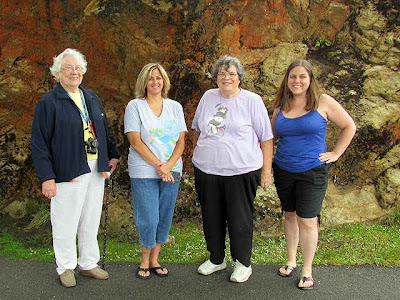 We continued on toward the lighthouse, having very little hope of actually seeing it, given the weather conditions.  When we got to the overlook, this was our view.

If you really wanted to see the lighthouse, you could walk down to it, but, having experienced stairs in Italy, I wasn't interested, nor was anybody else.

Instead, we headed back to the car and decided to go to Drake's Beach, where there were crowds, but not too bad.

We went to the Drakes Beach cafe, where we had lunch.  Anne and I had some of the best fish and chips I have tasted in a long time.

Thom Buras, the photographer who had taken our photo was there finishing his lunch.  We chatted with him and Anne asked about the address on his card, which is near where one of her sons lives.  He said that actually the town got "too big" for him, so now he lives in a "town of one" -- he drives a small mobile home around and lives in that.  He had told us he was a "photo journalist" so I gave him my card, with the web address of this web site, though now that I've checked his out, I see that we do entirely different things and I'm sure he will have no interest in this journal.

Finally we drove back to Pt. Reyes Station, where we dropped Susan and Dawn at their car and we all returned to our respective homes.  Our new car has a thermometer on the dashboard so I was able to keep track of the temps.  It was in the high 60s when we were out at Drake's Bay and 70 when we left Pt. Reyes Station.  As we drove north, Anne and I watched the temperatures creep up one degree every 5-10 miles or so.  I finally stopped watching.  Too depressing.  But by the time I dropped Anne off at her house, it was 97.

All the dogs (and Walt) were happy to see me home again, though I was ready to head out into the fog again right away.
Posted by Bev Sykes at 12:00 AM

We loved seeing the Point Reyes Lighthouse - but even ??? years ago, I wasn't going to walk down there (and back up). Love your fog pictures.