"To absent friends," we ended the dinner with a toast with our left over glasses of water.  We always begin our Gilbert dinners with the toast "On...it's you," which is what Gilbert would say when friends arrived.   Though everyone thought of him as a friend, he didn't have many people whom he considered friends, and if he gave you "that took" and commented, dryly, "Oh...it's you," it was a high compliment indeed.
But "to absent friends" was a new one for us.

We have been having these "Gilbert dinners" for some 27 years now.  As long-time readers of this journal may remember, Gilbert Russak was my best friend, who died of a heart attack in 1986.  He was the music director of The Lamplighters, the now-61 year old musical theater company in San Francisco, considered one of the best Gilbert & Sullivan companies in the world.  Gilbert's unexpected death, at age 55, was devastating to so many people.

(The title of this blog is a tribute to Gilbert who, when he was performing, was the best KoKo in The Mikado.  One of KoKo's lines is "is this a time for airy persiflage?")
The year after his death, the five of us who had planned his funeral services, since his family lived in Oklahoma and didn't really have a clue about what would be appropriate, got together for a memorial dinner.  We had tapas, I remember.   We had such a good time celebrating Gilbert's life and our friendship and the tragedy that now bound us all together that we decided to do it again the next year.

By the third year, we had invited all the people whom Gilbert would have considered friends and we may have had as many as 20 or more people.  We chose a different restaurant each year, usually a restaurant that was one of Gilbert's regular haunts.  He ate out almost every night, so there were many from which to choose.

I had to laugh each year because Gilbert is my "parking angel."  Parking in San Francisco is notoriously horrible and when he and I ate out each week, on my day to work at the Lamplighters, I was the one who spied a parking place for us.  The day after his memorial service, when I was driving his family around on a tour of San Francisco, I got in the car (his car) and said a quiet prayer of sorts to Gilbert -- "OK, Gilbert.  I've been finding parking places for you for years; now it's time for you to find parking places for me."  That day I found parking in impossible places right in front of wherever we were going--Chinatown and Ghirardelli Square, for two high-traffic tourist places.  And I keep finding impossible parking places.  Each year at the Gilbert dinner, the others in the group would drive around and around trying to find parking and there would be a spot, if not directly in front of the restaurant door, within one or two parking spots from it.  It got to be a joke, and skeptical friends who poo-poo'd my "parking angel" theory began to believe it.

The dinners were always such fun, such celebrations of life.  We didn't really spend a lot of time talking about Gilbert, other than the "Oh it's you" toast to begin things, but we enjoyed the friendship that brought us all together.  And laugh.  Oh did we laugh!  We still recall the night we ate at the Russian Bear, a new Russian restaurant where Marie, the oldest of the group, who used to rent a room from Gilbert, kept us all in stitches.

Over the years we lost people who were busy and who for one reason or another had other plans on the night of the dinner.  The people who dropped out were the "fringe friends," people we had debated about including in the first place, who weren't in the close circle of Gilbert's friends.  The faithful remained.

Will Connelly was the heart of the dinner.  Whenever I questioned whether it was time to quit or not, Will would keep us all going, find a special restaurant (since, over time, most of Gilbert's favorite restaurants had gone out of businesss).  It was Will who christened this dinner "GRUB" (Gala Re-interment of Uncle Buddy" -- his family called him Buddy).  He would contact everyone, and whip up the enthusiasm and we would all come out once again to celebrate our friendship with Gilbert, and with each other.

For the others, it was one more time to get together; for Walt and me, it might be the only time in a year that we saw some of these people, since we were no longer involved in The Lamplighters and only went to the shows three times a year.   For all of us, it was the only time to reconnect with Marie, such a funny, funny lady who had been with The Lamplighters for years and who is now too old to perform.

And then tragedy struck.  Jeannie died unexpectedly.  It was a huge blow.  She had been the leading Lamplighters contralto for years and her husband John, the impossibly tall baritone, was a company favorite as well.  One moment she was there, the next she was dead, without a hint that her heart was about to give out.  When we toasted "Oh...it's you.." we included Jeannie in our toast.

Adrian died too.  He hadn't performed with the company in decades, but had been the head of the Board of Directors for a long time.  His wife continued to join us.

And then the unthinkable thing happened -- Will died two years ago. This was a huge blow and I questioned whether we should keep the dinner going, but Jill, that determined English woman, insisted that yes, we should keep it going.  So she found the restaurant last year and I took over the organizing of all of us and getting us to the dinner.

This year only 7 of us came.  Jeannie's husband was in too much pain from his many physical problems, Marie and Adrian's wife Connie had other plans, Diana, the Lamplighters orchestra contractrix, had a conflicting gig.  So we all fit around one round table at a restaurant in San Francisco's Presidio, where we ate last year.  The round table was great because usually at these events, I'm at one end of the table and enjoy chatting with the people around me, but never get to chat with the people at the other end of the table.  This time we could all participate in the same conversation, and Jill kept the topics coming.

We talked of Gilbert, we talked of Will and we remembered the other Lamplighters friends who have gone from our lives.  We had the annual "organ recital," who has been struggling with ill health or other problem. We discussed my mother and the fear of all of us about what will happen when we begin to fail. Roger announced that he is giving up his house out on the beach with the fabulous view of the Cliff House and moving out of San Francisco.  We talked about who would host the fabulous Christmas party he gives each year and Shelley stepped up and said that if Roger decorated, she'd have it at her house.

It was just an ordinary dinner among friends but it was a wonderful evening.  We have been having these dinners for far longer than anybody in the group had known Gilbert in life, but it is Gilbert who brings us together each year and at the end of the evening we were already planning next year's G.R.U.B.

And when Walt and I arrived at the restaurant there were cars parked everywhere, except right in front of the door to the restaurant.  My Parking Angel had not deserted me. 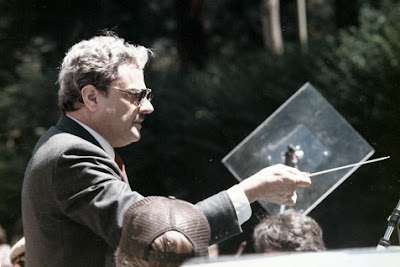 Still missed, after all these years
Posted by Bev Sykes at 7:27 AM