What an Awesome Day!

Yesterday was awesome from start to finish and my heart was so full as I tumbled onto couch at 1 a.m.

First, I bought my new camera.  It does neat stuff like this:

It also has a 16x zoom which, when used in a moving car still gives clear pictures (no way would I have gotten this picture with my Panasonic)

On the freeway there was a kerfuffle going east (we were going west).   A helicopter landed on the freeway and traffic was backed up as far as the eye could see.  That was kind of exciting (until later that night we learned there had been a shooting, a bad guy was killed and people were stuck for as long as 2 hours in the sweltering heat.  One woman wrote that her car got up to 121 degrees!)

Walt turned on the radio to get traffic reports and instead heard that a California appeals court had lifted the ban on gay marriages (instead of waiting the expected 25 days) and that marriages were starting to be performed at San Francisco City Hall now.  We listened to the first marriage ceremony, when Sandy Stier and Kristin Perry (one of the two couples which brought the action challenging Prop 8) were married by California Attorney General Kamala Harris.  I listened to the ceremony with tears running down my cheeks.  I don't know either woman, but I remember the emotion surrounding Ellen and Shelly's wedding 5 years ago and was just so happy that after fighting so hard all these years these two women were finally legally married.

When we got to San Francisco's City Hall, there was a rainbow flag flying from one of the balconies.

We parked the car and took our Groupon to Canto do Brasil, a restaurant where I have wanted to eat for many, many years.

At first they weren't going to seat us because it's a small place and we had no reservation, but the guy finally took pity on me and told us that if we promised to leave by 7 p.m., he would serve us.  Since we had tickets for a concert at 8, I told him that would be no problem.  In fact, I had been concerned because we had been told service there was very slow.  This would ensure that we would be out on time.

We both ordered caiparinia, that Brasilian drink with tons of limes and cachaca, a kind of Brasilian rum.  I hadn't had one of those in decades and it was as delicious as I remember it being.

Walt had feijoada, the national dish of Brasil, but I decided to order a shrimp dish because I can make feijoada myself and I remember some really good shrimp dishes.  We were disappointed that there was no pao de queijo, a really good little cheese bread that I have made and love, as an appetizer, but we had a cheese croquette, which was delicious and a new taste sensation.

As promised, we left the restaurant promptly at 7 and walked to the Nourse Theatre for a concert by the San Francisco Gay Men's Chorus, called Harvey Milk 2013.  The reason we had tickets was that our friend Steve Schalchlin had written a number that was being performed.  They offered him comp tickets, but since he's in New York and couldn't fly out, he offered them to us.

When we got to the theater, they had no tickets for us at will-call, so they called their Management Director to see what he could do about it.  To our delight, the Management Director was John Alecca, former General Manger of the Lamplighters and a long-time friend, someone Alison and I had interviewed for the book a few months ago.  John got tickets for us.  Great seats...reviewer quality seats.

I wish I could express adequately the emotion I felt sitting there in San Francisco on Gay Pride Eve, just after the first same sex marriages had been conducted and celebrating the very first gay man in the country to ever be elected to public office.

At the start of the program, two of the organizers said that they knew that they would be celebrating Harvey Milk on the 35th anniversary of his assassination, and on the 35th anniversary of the founding of the Gay Men's Chorus, but there was no way when they planned this that they could have anticipated they would also be celebrating the wins in the Supreme Court and the weddings that were about to take place.  There was a long sustained applause and cheers that rolled through the auditorium and I suspect there were a lot of tears.

The show started with a recording Milk had made to be played only in the event of his assassination.  He had a premonition of what was inevitably to happen, but probaby would not have guessed that Mayor George Moscone would be killed by Supervisor Dan White as well.  At intermission, Cleve Jones, who started the AIDS quilt so many years ago, said that as he stared down to the floor at the newly murdered Milk on that fateful night, all he could think of was "It's over. It's all over."  He went on to say that later that night as hundreds of people, and then thousands of people and then tens of thousands of people marched from the Castro District to City Hall carrying candles and as a small group of men got up and sang on the steps of City Hall (the first performance of the newly formed Gay Men's Chorus), he thought "No...it's not all over...it's just beginning."

And was it ever.  Certainly nobody 35 years ago could have predicted how far the gay community has come in its fight for equal rights, and definitely not the actions of the Supreme Court this week.  Harvey Milk started it all.  I wonder if the United States will ever put his face on a postage stamp (probably not!)

The concert was in two parts.  Part 1, "I am the Legacy," four musical numbers which were chosen from hundreds that had been submitted from all over the world from the "Post-Harvey generation" who are today benefiting from and living his legacy.  Steve's "I met a boy" was second and struck a nice tone between pathos and humor as three groups of men sang about meeting their partners in different decades and what a difference it was (I asked him for lyrics, but he hasn't sent them yet.  In some places, audience reaction covered up what the chorus was singing).  It got loud, sustained applause and appropriate laughter throughout the performance.

There was also an amazing dance number and a poignant song written by a young man about growing up gay in Altoona, PA. ("I ask for the movement to continue, for the movement to grow, because last week I got a phone call from Altoona, Pennsylvania, and my election gave somebody else, one more person, hope. And after all, that's what this is all about. It's not about personal gain, not about ego, not about power — it's about giving those young people out there in the Altoona, Pennsylvanias, hope. You gotta give them hope." -- Harvey Milk).

Part 1 ended with a song called "Give Them Hope" with visuals by the chorus that are indescribable, but amazing.  From the program:  "The selected dance, video, art, original music, and new choral pieces weave together a testimony of how Harvey Milk has changed the world for the better."  (The technicians must have been working overtime because one of the video clips included video from the wedding that had taken place that afternoon!)

Part Two was the meat of the concert, a monumental song cycle by Andrew Lippa (who also played Harvey Milk in the piece) called "I am Harvey Milk."  It combined video, choral work, solos by Lippa, by Noah Marlow, a kid with a great set of pipes and an impressive resume for one so young, as the young Harvey Milk, and Laura Benanti as "Soprano."

As an evening's entertainment, it was emotionally exhausting and I cried more than once throughout.  But then it was back out into the world again.   We took a detour and went to look at city hall, lit up in rainbow colors.   There were lots of people taking pictures. 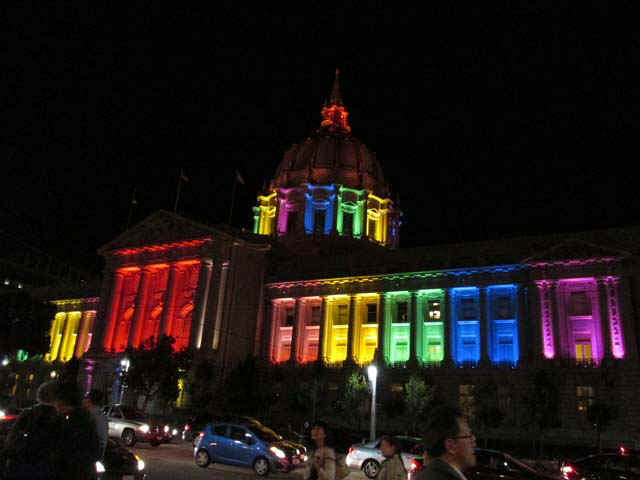 My heart was full and so happy for all of the gay people in California and across the nation whose equality with heterosexual people has just been acknowledged by the Supreme Court and the Obama Administration.  I thought of the 1950s, which I remember, growing up in San Francisco, where I would see photos in the paper of gay men being loaded into paddy wagons and taken off to the police station, just because they were in a bar together.  I remember the 60s, when people began coming out of the closet, when the Castro became the "gay neighborhood."  I remember the 70s and 80s when AIDS began to decimate the gay community and nobody knew what it was, and President Reagan refused to even acknowledge that there was a problem.   And I remember standing with Ellen and Shelly at Equality rallies, writing endless letters, signing endless petitions, culminating in the jubilation of their legal wedding, only to watch that dreaded Proposition 8 deny that legal right to other gay couples in love.  And I thought of last week when the Supreme Court finally admitted that DOMA was unconstitutional and struck down Proposition 8.  I thought how far this determined population has come and what an amazing feeling it must be today.  And how much more work there is to do.

The drive home was OK to a point and then we ended up stopped dead.   It was exactly in the spot where the morning's back-up had been, though I have not been able to find any reason for it, and the reports of the accident say that it was cleaned up within 4 hours.  But since we couldn't see an end to the stop and go traffic, Walt turned around and took a back way into Davis.  Still it was after midnight before we got home and the dogs were very hungry.


But what a day!  Absolutely amazing and I'm so grateful (and yeah, even proud) to be Steve Schalchlin's friend and have him think to offer these tickets to us!
Posted by Bev Sykes at 12:00 AM

Bev hello!!! I'm Brendan's mama! Thank you so much for posting those funny FB sayings of Baddy!! Somebody sent them to me yesterday! Appreciate your doing that so much, and they were so funny!!! He and Ned were partners in crime!!! I am on Facebook, are you???? Love Phyllis (Petras)XXX OOO