A news report I saw today says they broke all records for heat in the Sacramento area today.  We did not see the sun here, and I had to close the door to the back yard because it was getting chilly.  Tomorrow it is expected to be only 80 in Davis.  We have definitely lucked out!

When we arrived here in Santa Barbara, I noticed right away that the kitchen, which had been brand new when I was here a couple of weeks ago, is starting to look like a working kitchen.  Cabinets had food in them, there were "things" on the counter, the dishwasher was full.  They were settling in.

Tonight was to be the maiden voyage of the new kitchen.

Joe is a great cook and the remodel was designed to give him more working room and to make his chef's creations easier to create.

Walt and I went off to Tom's for the afternoon.  Bri had a friend over for a play date and they entertained each other.  Walt and I entertained Lacie.  I am the "reading grandma" (whenever Lacie sees me, she points at the books and commands "ree!"), Grandpa was the pushing grandpa.

Walt and I stopped at the store on the way home, so Tom, Laurel and the girls beat us here and Walt pointed out how much he enjoyed watching Tom and Joe in the kitchen together.

Chicken Parmesan was on the menu and as things got going hot and heavy, it was fun to see the full kitchen.

In the meantime, Lacie and Brianna were in the living room sharing some mini carrots dipped in hummus.

Joe decided to let Bri help him make chocolate chip cookies for dessert.  Laurel and I, the bakers in the group, cringed watching the making process without a mixer (Joe decided he never used his hand mixer, so gave it away), but in the end they turned out just great.

Tom et al. left soon after dinner, as it was the girls' bedtime and they were fading fast.  We hope to see them again in the morning before we head for home. 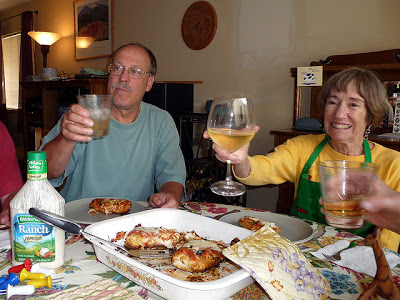