As we were leaving the performance area where we had just watched As You Like It, I told Walt that I think I'm getting too old for days like that.   It was a 3-event (sorta) day and my body was telling me it had to get to sleep now.

It wasn't exactly running a marathon kind of day.  Just a normal running errands kind of day, but I seem to be having more trouble with them lately.   Maybe it's the stress of having my mother to deal with, though she certainly has hardly been much trouble now that she is settled in Davis.

The day started with a trip to the post office to mail a couple of packages.  It was a typical Davis morning at the post office, with 8 customers in line and only one clerk working.  I was amused, though, by a toddler behind me who was making a fuss.  Her mother handed her an iPad and told her to go sit down and play.

And she did...very efficiently.  Today's modern baby, growing up in the computer age!  I imagine this is something Lacie could do quite well also
.
After the post office, I drove in to Sacramento to meet my friend Kathy for lunch, as we do once a month.  We had two months of catching up to do, though, as I was unable to make our last lunch date because of being in the middle of stuff with my mother.  So we talked and talked and taked until I realized that I had to leave now if I was going to get to work on time that afternoon.

I actually got home with 25 minutes to spare before I had to leave for Logos.  The drive home had been a rough one, as I desperately wanted to sleep.   I don't understand why, since I had a good night's sleep (for me) the night before, but I parked in the carport, staggered into the house and told Walt to wake me in 25 minutes.  I climbed into my recliner and was asleep almost instantly.

The mail came while I was asleep (Walt had thoughtfully put Polly's bark collar on her, knowing the mailman would probably come soon, so she wouldn't bark and wake me up!)  I grabbed the mail and took it with me to read at work.

The nap was just what I needed and I awoke refreshed and ready to go to Logos.  It was a not too slow, not too fast afternoon.  One guy came in with his son, who ran right to his favorite book shelf, pulled out one he wanted and curled up on the floor engrossed in the book while his father browsed.  I always love it when I see young children having such a good time with books.  It gives me hope for the future.  :)

In the mail was a package, which I assumed was something from Swap Bot, but I was pleasantly surprised to open it and find a book that I just ordered.   When our kids outgrew their kid books, I put them in a box to save for our future grandchildren.  The box has disappeared.  I have been searching for it literally for 10 years or more.  I found a box of books that were Walt's favorites when he was a kid, but the ones that our kids loved just don't seem to exist.  There were two in particular that I have been sad about because they were two top favorites.

One was a book called "How Joe the Bear and Sam the Mouse Got Together" and I don't know why I always think about that book when I'm with the girls.  I remember some of it  and I figured I could tell the story, making up the parts that I'd forgotten.  On a whim, I checked Amazon for the book and they had it.  You could actually buy a new copy of that book.  For $172.  Yes, $172 for a run of the mill children's book.  BUT, they also had a used copy for $7 and, thrilled about that, I ordered it.

The other book was Jeri's very favorite for a long time, though I'm sure she doesnt remember it.  It was called "I'm Suzy" and is just a simple little book about a girl realizing who she is.  Amazon had that, too, for some astronomical price, but they also had a used copy for $9 (though by the time I ordered, the $9 copy was gone and the cheapest used copy I could get was $15...but by now I was a woman on a mission and I ordered it).

"Joe the Bear..." will probably arrive today.   Yesterday's package was "I'm Suzy" and how excited I was to read the familiar little story again.  It's probably geared to about a 2-3 year old but it's the pictures that make it so cute and I can hardly wait to get to Santa Barbara again to read it to Lacie, and maybe to Bri.  I know they won't enjoy hearing it nearly as much as I will enjoy reading it. 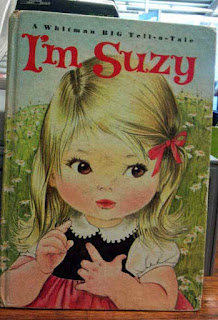 Walt, bless him, ordered Chinese take-out food for dinner, so we came home and ate and got ready go to up to the university to see As You Like It.   Shakespeare is never my ideal way to spend an evening, but this was a good production.  However, something happens to my body when I get tired like I was yesterday.  It's like every molecule in my body is fighting to go to sleep.  I can't really explain it, but I get to a point where I just ache to lie down.  It's too much effort to keep my head up.  Everything in my body feels heavy. I didn't fall asleep during the show, but I sure wanted to lie down to watch it!

We got to the car and made the short drive home.  I went immediately to put on night clothes and was asleep within 10 minutes of arriving at home.   But I have sept the night and feel very well this morning and am elated to look on my calendar and see nothing written.  I think today is the day my mother can attend one of the memory classes, at 10:30 or so, so I'll do that with her, but the whole day stretches out before me with nothing pressing except writing the review.

Life is good, even if I do sometimes feel very old.
Posted by Bev Sykes at 6:37 AM

I get days like that, when all I want to do is sleep. It seems to coincide with my eating too much sugar and/or empty carbs. Sometimes I sleep heavily for a couple of hours at night and then am wide awake for three...