The Life of a Camera

It's time to tell the story of my camera.

Many years ago.  I don't remember how many now, but long before Walt's mother got so sick she had to move out of Assisted Living, Peggy (yes that Peggy) gave me a new camera for Christmas.  It was a Panasonic Lumix TZ5, I think.   Great little point-and-shoot camera.  I think it had an 10x zoom, which was quite a bit more than I had on my then-current camera.

The first thing I took the camera to was Cousins Day, where I was showing it off to Peach, Kathy and my mother while we were starting to drink our martinis.   Until now, only Peach and my mother remember the story (and my mother probably doesn't remember it either!), but I somehow bobbled the camera as I was going to show it to someone of them, the camera flew up in the air and -- I couldn't do this again if I tried -- it fell right into Peach's martini.

Needless to say, vodka does not make a good camera bath and the thing was fried.

I didn't dare tell Peggy...or even Walt, for that matter.   Instead I went out the next day and bought an identical camera and nobody was the wiser.

I used that camera happily for a long time until the day I took it to Santa Barbara when we were visiting Alice at Maravilla.  I took the camera with me when we went to dinner because I didn't want to leave it unguarded in her apartment.
Well, when dinner was over, I forgot and left the camera in its little bag next to the dining room table.  I realized it when we got back to Alice Nan's house and I immediately called the dining room and spoke with the person in charge who assured me that, yes, they had found the camera and had taken it to the office and I could pick it up at the office the next day.

Only when I went to the office, nobody could find the camera and the person who purportedly took it there was not expected to be back at work for a week and was unreachable.

It toook several weeks of back and forth and wonderful follow up by Alice Nan (since we had to go home), but eventually Maravilla gave me a check for the amount of the camera and I went and bought another Panasonic.  The nice thing was that between the time I lost it and the time I bought a new one, a new model had come out, now with a 12x zoom.  Even better.

I have used that camera happily for at least five years or more.   It has taken me to France, Italy, Russia, China, and all those countries we visited last year.  It has been a great, loyal camera and though (truth to tell), I had some complaints about photo quality, in the size I post the pictures on this journal, you could never tell and the very good outweighed the less-than-good, so I've been happy.

Only now the camera is being temperamental.  The zoom sticks.   When I push the shutter, nothing happens.  Or I think I've taken a photo and discover later it did not actually take it.  It's still a fine camera, but facing a trip to the Ukraine in the immediate future, I didn't want to go with a camera that was going to fail on me sometimes, so I decided to get a new camera.

Despite my complaints about the Panasonic, I thought I'd just get another one, since I am so familiar with that one, but it turns out that Office Max doesn't carry that brand, but they do have Canon cameras, and if I were not going to get a Panasonic, Canon would be my next choice.  Jeri swears by hers.  Char swears by hers.  Peggy has an SLR, but it, too, is a Canon

I found the Canon model I thought I would like and, in a decision that rivals the decision we made to buy a new car (i.e., very little mental debate), I bought it.  It seems to bridge the gap between an automatic point-and-shoot camera and a fancy "do all the settings yourself" camera in a way that the Panasonic did not.  And it has a 16x zoom.   I'm going to be curious to see how it actually does at 16x, because it was the quality of the zoomed photos that I most was upset about.

The only thing it does NOT have, which I'm sorry I didn't notice, is a self-timer.  I used the self timer a lot on the Panasonic, but mostly for Cousins Day events, and we don't have those any more, so maybe the lack won't be so bad.  And the Panasonic still works for those pictures I take of myself around the house, so it's not like I don't have a self timer at all.

The next several days are going to be very hot (109 predicted for Wednesday), so it's a great time to sit at home and play with the new camera and learn to love it like I have loved the Panasonic for so long. 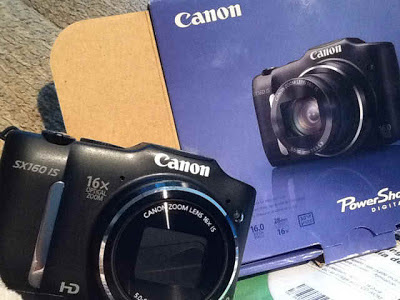 Email ThisBlogThis!Share to TwitterShare to FacebookShare to Pinterest
Labels: camera

And here I thought I was the only one who kept losing things...

May you enjoy the new camera for years to come.