I spent most of the day at Covell Gardens and it was...quite interesting.  Amazing what sorts of things you learn when you are there all day, and "do stuff."  You learn, for one thing, that the reason you "do stuff" is because when you "do stuff," you also "learn stuff."

There was an activity called "keep your brain sharp" that I thought started at 10:30, so I got to my mother's around 10:15, only it turned out that the activity actually started at 11.  I figured we could take advantage of the extra 30 minutes and get her change of address cards written.

I discovered that doing anything that involves thinking overwhelms her.  She couldn't find her address book and when I reminded her where I had put it, it wasn't there and she wandered around all but wringing her hands for not being able to find the address book.  I finally found her rolodex which had many of her addresses on it.  I asked her to look for the names she wanted to send change of address cards to.  She said she'd been thinking about it and she knew she had to do it but whenever she picked up the rolodex, she would get rattled and so overwhelmed that she finally put them in a drawer.  So much for THAT!

I finally decided that I would have to address the cards and mail them myself.  As for the addresses she could not find, I called her best friend in Marin County and she gave me all of the addresses I needed (and couple I didn't know I needed).  It's a good place to start.

Next we went to "Keep Your Brain Sharp."  We arrived a little late and two other women (a resident and a woman who looked like a college student who was there to help) were fillling out a form.  It was a true and false test about how you think about brain function (adults laugh just as much as children on a daily basis, all fruits and vegetables are good sources of anti-oxidents, etc.)  My mother was flustered from the get go.  She was so tense because she didn't want to make a mistake  Everyone kept telling her that there were no right or wrong answers that it was just a starting for discussion, except the other resident who grumbled at her to hurry up because everyone else had already finished their forms!

The second activity was to write down the names of all the animals you could see around you.  When that paper was passed out, my mother rolled her eyes at me and said "I don't belong here" (I think it was because she could only think of 3 different animals).  The grumpy lady had a huge list of animals, but they were mostly zoo animals, which wasn't the assignment.  The new lady who had joined us didn't even try, but got up and left.

The interesting thing about this activity, though, was a discussion about rodents.  Apparently the C wing (my mother is in A wing) has had an infestation of mice and the lady who left the class told us that the other day she found a cute little mouse in her apartment and she went to pick it up and put it outside, but it panicked and ran under...something.  Later, when we went ot the hair dresser, I heard more about the mice in C wing.
The activity was over at 11:30, and her hairdresser appointment was not until 1, so we went to lunch while waiting.  Fish and chips today and once again my mother complained that they serve too much and she hates to think it was going to be thrown away, so, good Samaritan that I am, I finished what fish and chips she felt too full to finish.

We sat with Jean, a new arrival from Redding, who has been her just about as long as my mother has.  I'm keeping a record of all the people we meet so I can greet them by name.  It's nice to start to know people, even if my mother can't remember most of them from one meeting to the next!

At 1, we went down to Lucy's beauty shop.  She's been here many years and my mother had been very leery about making an appointment with her, but put on her best martyr attitude and said that she guessed that she was going to have to find a new hairdresser because she couldn't keep going to Hannah, who has done her hair for 35 years.

When she last went to Hannah, I took pictures of how her hair was set so we could show it to Lucy.  I also took an "after" shot.  Lucy studied them very carefully.

She assured my mother that she does hair like this all the time.   My mother submitted to her ministrations.
Lucy could see that she was going to be a little late for her next appointment(s), so she made some phone calls.  She told me that she wasn't sure if one of the ladies scheduled could come because the memory wing was under quarantine because there was a virus sweeping through the residents there (hadn't heard that either!)

While I was sitting in the beauty parlor reading, I heard a familiar voice and looked out to see Ned's friend's wife helping herself to some of the tea party cookies before going to see her grandmother.  (There is a tea party every afternoon at 2 p.m.)

When the hair dresser was finished, it was pronounced a great success and my mother said she'd see her in 2 weeks for the next "do." 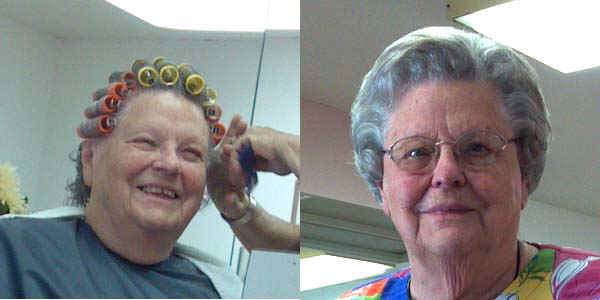 She had wanted to get a new battery for her watch.  She can't remember for more than 2 minutes that her watch is not showing the correct time.  I told her we could go after she had her hair done, but that activity pretty much wore her out and she decided we should do it tomorrow.  There is a banjo concert tomorrow night that Walt and I will go to, but I will probably come over earlier and take her out for a battery.

I have to admit it was good to get back home again after 4 hours at "the home," but I'm starting to settle into Covell along with my mother and it's kind of fun.
Posted by Bev Sykes at 12:00 AM