I did something I've never done before on Friday night.
We were going to the Woodland Opera House to review Noel Coward's Blythe Spirit.  I thought it odd that the sandwich board outside the theater showed posters for two shows, but one was the family series show and I figured they would run that at the matinee on Saturday, and the Coward at night.

I never thought anything else when they handed me my program and I went to sit down in my seat.  I noticed that the slick program had a photo from Anne of Green Gables and I still didn't get it, thinking how clever they were to use one program for  two shows.

It wasn't until I turned the program over, expecting to see Blythe Spirit on the backside that I realized I was a month early for that show and I really was there to see Anne of Green Gables, the family show. No wonder the theater was full (which it would not have been for a Noel Coward) and that so many people brought their kids.  I felt pretty dumb.  But I stayed for the show and wrote a review, even confessing my mistake.

There were friends sitting in front of us who asked me at intermission and at the end of the show what I thought (I said "Well, it's no Noel Coward").  I hate that.  I hate being asked my opinion because often I don't really formulate an opinion until we're on the drive back home and I dissect the play with Walt.  It's why I never go out at intermission and rarely stay for an "after party," if there is one on opening night.  It's fine when I'm there with the little clique of critics and then we stand around discussing the show, but I hate it when someone in the audience knows who I am and asks my opinion before I have formed one!

On Saturday, we didn't go to a show, we went to a reunion of members of the Davis Comic Opera Company.  The company had a 33 year run here in Davis, finally shutting down in 2006.

The first show took place shortly before we moved to Davis.  We were subscribing to the Davis paper at the time, to get a feel for the town, and I knew I wanted to be involved with DCOC, and had one of my more embarrassing moments, when I showed up at what I thought was a company meeting, hoping to talk with the director about volunteering to help with publicity.

It turned out it was an audition and rather than admit I made a mistake, I auditioned.  Everyone was there with their music in hand.  I had nothing, but stumbled through "Little Buttercup" horribly.  When the director called me later to gently let me know I had not made it into the show, I told him I never intended to be in the show, but just wanted to help with publicity.  I went on to do publicity for many years and Walt soon joined the tech crew.

They managed to get several old-old timers at the reunion along with more recent alums and there were the usual groaning board of snacks. 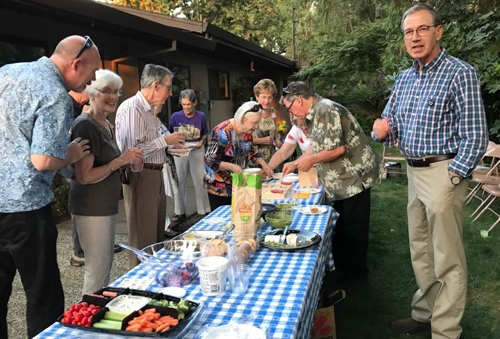 All of those who have died were remembered in a tree with all of the names (and tags to fill out in case someone had been missed).  It's sad to realize how many of those we once knew fairly well are no longer with us.

But everyone had fun reminiscing, looking through the scrapbooks of old shows.

And at the end of the evening there was the ubiquitous slide show of many of the shows (only a very small portion of the shows!  We only went through one carousel of slides.

But it was a good afternoon of fun, food, and friends.  And lots of memories.

On Sunday it was another interesting theatrical experience.  The paper wants a "backstage story" about what goes on backstage during a show, so I went to the Davis Musical Theatre Company, where I reviewed Jekyll and Hyde last week and took note on the before and during the show and will work on writing an article about that today.

You never know what you're going to find backstage, and I was surprised to run into this almost life-size teen age elephant.  I was trying to remember when I saw an elephant in Jekyll and Hyde but then realized it was for Aladdin, which is the youth theater production which runs on Saturdays concurrently with Jekyll and Hyde (they push one set to the side and back and move in the other set and then, push it all back again before the evening show!

It felt like being part of Act Two of Noises Off, where you see the production from the back while the real show is going on in front.  Sadly, there weren't nearly enough things that went wrong as there are in that show!  Does not make for a funny article, but I think it will be interesting to people who have no idea of what it's like backstage during a show.

Today I'll be working on the article, being like, you know, a real writer.
Posted by Bev Sykes at 7:08 AM

Email ThisBlogThis!Share to TwitterShare to FacebookShare to Pinterest
Labels: theater