I did something smart many years ago.  I decided to start a database of FTW entries.  I had no idea that this many years and over 6,700 entries later, I would still be keeping it.  The database was in this format

I have been incredibly grateful over the years to have this record because if I'm looking for a photo, for example all I have to do is search the database and within seconds, it lists for me where to find all examples of that photo.  Same with "I think I wrote an entry about and such...did I?"  Just do a search and voila...all entries that match that subject.

Now I stored the database on my E drive, which was where I stored all of my database stuff.  Long ago, I decided to store NOTHING on the desktop hard drive because computers are forever dying.  But surely external hard drives didn't do that, did they?

Most of my documents are on the F drive, where the word processing, and journal documents are.
In about March of last year, I decided that JUST TO BE SAFE, I would make a back-up of the journal entries on my C drive and so did that  All the entries from March 2000 to March 2017.  Occasionally I am smart.

And then the E drive crashed.  At first I was disconsolate, thinking that the record of all 6,700+ entries were gone.  But then I remembered the backup and...voila!  There it was.  Only five months of entries to bring it up to date.  I usually update the database at the end of each month, not daily.  And when I do it it takes me about 30-60 minutes to do and almost always involves my skipping an entry somewhere in the middle and having to go back and do a week or so over again.

BUT at least I had not lost everything.  AND I was going to be smart about it.  I was going to save the database on the C drive, on the F drive and on a flash drive.  And I would keep all three copies updated monthly.  I bought myself a couple of 36 gig flash drives and first copied ALL of my WordPefect files on that (surprised to discover that it took only a teeny corner of the drive, so all my WP files are now backed up) and then I started updating the journal database.

After two days of this I am so bored with my life!!!  Updating involves at least skimming thru every entry to remember what subject(s) I talked about, and which photos I used.  So it's essentially re-reading everything for the last five months and I am bored silly with my life over the past five months!

I took lots of breaks.  When I finished a month, I would go and Do Something (like watch National Velvet, for example, which gave me an hour and a half break and a big catharsis so I could sit and cry and not feel self-conscious about it), or have a second or third lunch before going back to the next month

But it is FINISHED!!!

I also keep a database of all the books I read and that hadn't been backed up since March either, but that was a fairy simple thing to do -- the hard part was adding all the pages I'd read for the year, but I will assume that I didn't make any mistakes on the calculator--and if I did, nobody will ever know or care.

The movie database is much easier.  When you only see one or two movies a year, it's not a big database and, miraculously, I had already backed up our one movie for 2017 (Beauty and the Beast, which we saw when Caroline was here) so I just had to copy it onto the flash drive.

In the morning I wrote the review of Octoroon, which we saw last night.  I reviewed it for the Sacramento paper and now I have to write the review for the Davis paper.

It was one weird show and very difficult to review.  It's a revision of 19th century anti-slavery melodrama written by an Irish playwright.  The revision is written by a 32 year old African American playwright

It is your standard melodrama plot (plantation foreclosure, sweet thing to be ravaged, slaves to be sold and in the end salvation at the last minute), but I never heard the N-word used so many times in my life, by both the slaves (3 of them) and the plantation owners.  The situations are meant to be broadly funny to get people thinking about the issues and though this was written a couple of years ago, in light of Charlottesville and all that is going on right now, it is very timely.

(The Southern Belle, however, was perfect).

Walking out of the theater at the end of the show, I heard someone say something like "I really enjoyed that, but don't know what I just saw."  A white woman told me it was the worst thing she had ever seen at that theater and was a total waste of 2 hours, while a black man said he loved it and had seen it three times before.  The reviewers stood around and discussed it.  A woman who also writes for the Sacramento paper told me that usually when I'm the one writing for this theater, she's jealous, but this time she was glad it was me and not her.

The shorter Sacramento review turned out to be easier than I expected...it's the longer Davis review that is going to be the tricky one! 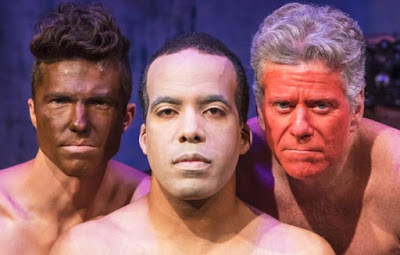 hammadbutt said...
This comment has been removed by a blog administrator.
September 6, 2017 at 3:50 AM