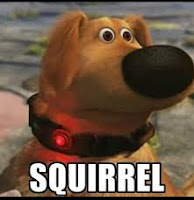 Did you see the movie Up with the cute little dog who got distracted every time a squirrel passed by?

Or maybe a better analogy is the Wizard of Oz, and that fire and brimstone machine that pours out smoke and speaks in a loud scary voice when really it's just a little old man behind a curtain ("Pay no attention to that man behind the screen")

I thought of those two examples yesterday.

* We are on the verge of nuclear war with North Korea, and each country has a little kid at its head just itching to try out their war toys.

* We're talking about a troop surge in Afghanistan.

* We have just been through the worst storm in this country's history and people are still digging out their homes.

*  A storm which has the potential of being even bigger is rolling around the Caribbean approaching Florida (please let it hit Mar-a-Lago!)

* We are dealing with the rise of white supremacists.

* Mueller and his committee are apparently finding more and more bad stuff.

And in the middle of this, POTUS decides to cancel DACA???  What was the reason for doing it NOW?  What is the urgency (other than that he is determined to erase every thing Obama ever did.)  He put the entire country in turmoil, headlines, talking heads, demonstrators, all concentrating on nothing but the Dreamers (whom the president claims to "love.")

The man is the master of distraction.  When things get uncomfortable, find something else to divert attention. Just like he stood in the White House to answer questions (like that is going to happen) and said "SQUIRREL!" and everybody stops thinking about all the bad stuff and goes chasing after the damn squirrels.

The ridiculous thing about this all is that now that he has put the future of 800,000 people who have only known the USA as "home" all of their lives and who, for all intents and purposes, have led blameless lives and are living productive lives and contributing to the country, in jeopardy, he claims to love them and to leave it to Congress to find a way to protect them...and THEN at the end of the day he tweets that Congress has six months to solve this problem and if they can't solve it "he will reconsider."

In the meantime, the guru is coming today to check out the computer and we'll see if I'll be back in business tonight or if he will take it with him for another week.
Posted by Bev Sykes at 3:30 AM

Email ThisBlogThis!Share to TwitterShare to FacebookShare to Pinterest
Labels: DACA