She's had her spark plugs checked, her joints lubed, her tires rotated and she's ready to go for another year.
After taking my mother to meet her doctor last week, this morning I decided it was the day to take her in for lab tests.  She had to be fasting and I was trying to figure out how that was going to work.  If I called her the night before or wrote it on her calendar (or both), there is no way she would remember.  I had to get to her before she went to breakfast, but I also didn't want to wake her up.

So I got up at 6, got to Atria at 7 and sat in one of the easy chairs near the dining room, reading, until 8.  I figured if she went to breakfast early I'd see her as soon as she came down her hallway.

At 8 it was late enough that I didn't feel bad about waking her up.   When I got to her apartment, the newspaper was still there, so I knew she was still sleeping.  I let myself in very quietly and went back to my book again.  About 20 minutes later, I heard her up and walking around, so I called out "Good morning!" to her so she wouldn't be shocked to walk into the living room and find me sitting there.

She was very out of it, having difficulty waking up, but we sat and talked for awhile and she kept saying she had forgotten that she had to go to the doctor today.  I kept telling her that I hadn't told her yet.  She asked over and over again what they were going to do to her (she thought she was getting a shot).

We finally got out to the car.  She loved the beautiful day and it was beautiful.  Crisp and clear with a hint of warmth.  The lab tests went very easily, though she repeated again how much she hated having blood drawn.   I meant to remind her that part of my duties on my very first job was to hold the arm steady of people, like her, who were afraid of blood draws.

She told the phlebotomist that she was 99 and he told her she didn't look nearly that old ("I thought you were in your 70s," he said.  Harumph.) and he hoped to see her next year when she had 3 digits in her age.

After we left the lab, I talked her into stopping for coffee and something to eat at a local coffee shop, since neither of us had eaten anything yet. She said more than once we should just go to Atria's dining room, where I could have anything I wanted, but I finally convinced her to try the coffee shop. Like Easter dinner, it was OK, but she was clearly uncomfortable, disoriented, and would have preferred to be at Atria, which is a place she knows.  I must remember that next time I decide to give her a "treat" and take her out to eat somewhere. It is no longer the treat for her that it is for me.

She did, however, love being out and seeing trees.  I could not count the number of times she raved about how beautiful this or that tree was and how this really is a very pretty town.

When we came back to Atria, I was reminded that it was just about exactly a year ago that I decided to just stop by Atria before we signed the contract at the place in Petaluma.  I remember the first thing I saw was the rose garden, all in bloom and knew instantly that this was the right place.

In the past year, the roses have bloomed, been cut back, lain dormant and now have bloomed again.

She just loved them and was particularly impressed by a beautiful coral colored rose. 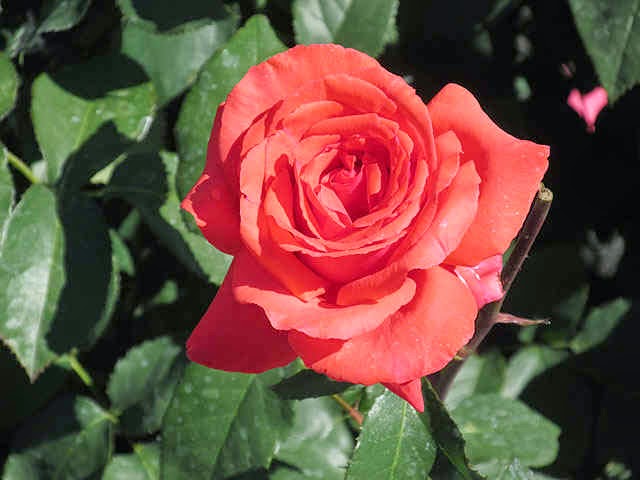 She said again that she's glad she moved here.

When we got back to the apartment, I checked her pill bottles and discovered one of them was empty.  There had been at least a couple dozen pills in there the last time I checked, less than 2 weeks ago, and I don't know if she took them all or threw them all away.  She doesn't remember having pills.  So I've taken her pills away and will now start doing her medication management because it's clear that she really can't do that at all.

We got a check written for a bill she had to pay and then I came home.  I had just about an hour before I was meeting a friend for lunch downtown.   Since I had just finished a lovely eggs benedict, I wasn't sure what I would have for lunch, but found that a cup of Panera soup was just about the perfect size.

We finished lunch, I came home, and took a 2 hour nap.  After the interrupted and then shortened night of sleep, all the medical stuff, and having two meals within 2 hours of each other, I was ready for a recharge.
Posted by Bev Sykes at 12:00 AM