Abbie watch finally ended around 8:45 tonight, with the birth of a healthy colt.

I have been checking BarnCam regularly for what seems like a month.   At night I take my iPad to the living with me, put it on the coffee table and whenever I wake up in the middle of the night, I can check in on Abbie.  My preference would have been to sleep in the recliner, but Sheila just gets all discombobulated when I don't at least start the night on the couch, so in deference to Sheila (who is delirious with joy when I start down the hall to the living room), I pack the iPad and take it with me.  She doesn't mind when I get up at 3 and move back to the reciner.   (These dogs run my life too successfully!)

Anyway I had just started spaghetti sauce simmering and a pot of water boiling for penne pasta and thought I'd check Abbie.  I figured it would be a miracle if I actually caught the birth.  I did manage to see Nana give birth to Muffin a couple of years ago, but the births go so quickly I would have to be very lucky to catch it again unless I watched the screen 24/7.

I saw Karen come in with the shovel, which was weird because there was no visible poop.  Then I realized she wasn't cleaning up, she was laying down hay.  I figured this might finally be "it."  This morning she had posted a message saying, "FINALLY something really encouraging! Milk test strips (ph testing) reading 6.0 and to quote the guide 'Mare should foal within 12 hours'! Thick sticky copious liquid! Abbie may actually be planning to HAVE this stinkin' foal! All fingers crossed for alive and healthy, please!"

I watched as she finished spreading the hay around and then went to examine Abbie.  She seemed quite involved in the hindquarters, then it looked like Abbie got down on her front legs with her hindquarters sticking up, at first, and then down on the straw and next thing I knew this black thing began to emerge.  Walt was watching over my shoulder.

The barn cam is not very good quality, so you have to do a lot of imagining, but before long, the colt was finally out.

At first I was nervous because he didn't seem to be moving, but eventually he was, Karen had backed away and was taking pictures, so I figured everything was OK.

I swear, the second that baby was out into the world, Abbie's belly deflated like a balloon.  I worried because it seemed to take a long time for Abbie to get up or even turn around and look at her newborn son, and Karen was concentrating on getting the colt cleaned up (of course at this point I didn't know if it was a boy or a girl)

Then when I went to drain the pasta and came back to the screen, Abbie was standing and while not paying a LOT of attention to the baby, at least seemed interested.

Eventually, the colt finally got to his feet.

That hurdle passed, and things obviously going OK, I took some time to check Karen's web page, where a "welcome baby" party was in progress.

Sarah wrote: "I didn't look away long, last time I clicked on that tab she was walking around and now FOAL!"

Kat asked: "What will I watch at night now?"

It went on and on, everybody so excited about the birth.  When Karen finally got back to the house, she posted the details. "Colt - Appaloosa - black or seal brown- possibly 2 blue eyes... Very strong, pretty head, slightly tangled front legs, easily straightened do delivery wasn't too hard!"   She also said that his barn name is going to be Friday.

I watched for awhile longer and was amazed at how lively Friday was within the first half hour.  He was examining everything in the stall and just looked like he was so happy to be unconfined.  Someone on the board said that it looked like Abbie just wanted to finally go to sleep, but had to watch the baby.
Karen said that it was Abbie's turn to stay awake and her turn to finally get some sleep.

After about an hour or more, I checked back and both horses were finally asleep.  I'm pretty sure Karen and Michael must be sleeping too!

And I don't have to take my iPad to bed with me tonight!! 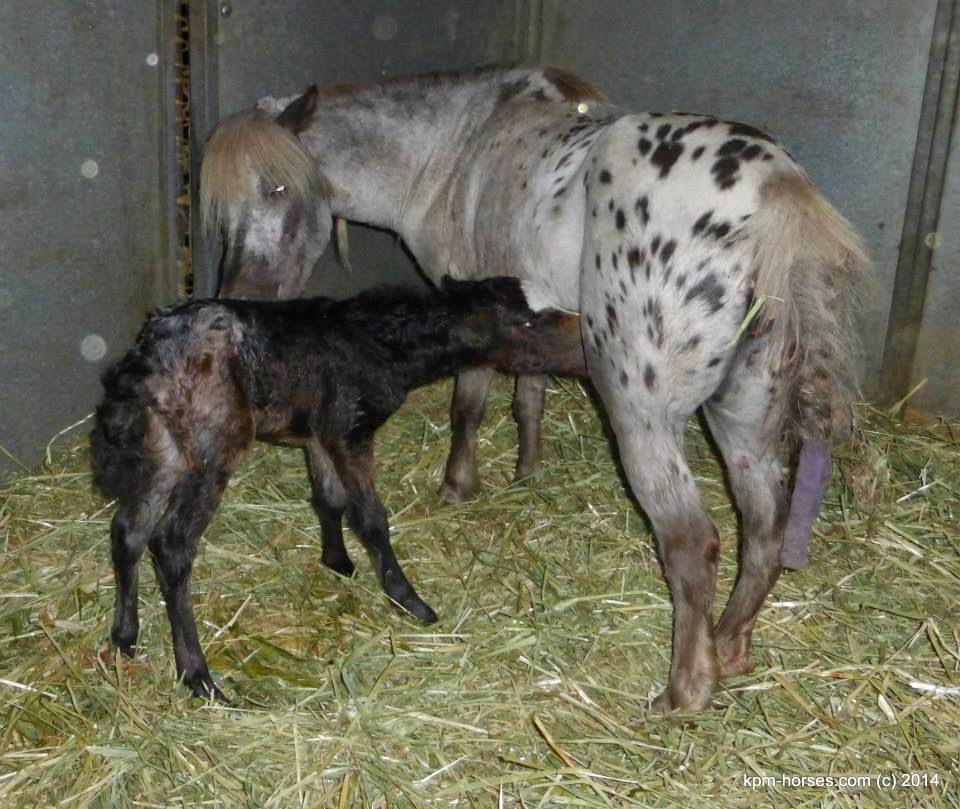 Email ThisBlogThis!Share to TwitterShare to FacebookShare to Pinterest
Labels: horse