Me and Lady Iris 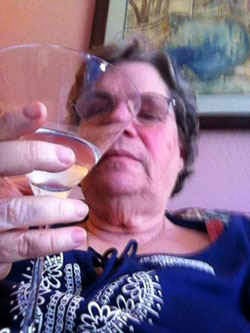 I had an Auntie Mame lunch this afternoon.


My friend, "Lady Iris," loves that story -- she loved the book, the movie and the musical (though agrees that nothing quite equals Rosalind Russell's performance in the original, non-musical movie).

She has recently retired and has been saying we should get together and do an Auntie Mame lunch.  "We'll have martinis and salty fish jam," she said. Today was the day.

I decided to wear an old jangly charm bracelet I had in my jewelry box.  (I was remembering the scene where Mame, in a play with her friend Vera Charles, wears a noisy bracelet and ends up getting it caughter in the star's costume.)

I hadn't seen my own bracelet in probably decades and when I looked at it this morning, I saw that one of the charms was from my 21st birthday, in 1964, so I've had the bracelet since before Walt and I were married.

Needless to say, my wrist has gained a bit of girth in the intervening 50 years and we couldn't get it on, so I didn't wear it.

There is a huge freeway repair going on in Sacramento right now which is tying up traffic all over the place.  It's the main story on all the news broadcasts, there are web sites to help you maneuver your way around the construction.  I decided to avoid it completely by going through town.  Still, I left myself plenty of time in case I hit traffic tie ups.

As it turned out, I hit NO traffic at all and actually got into Sacramento faster than anticipated.  I didn't want to show up for lunch an hour early, so I kind of piddled around, listening to my audio book.  I actually parked right near the house for awhile, then drove around again, and ultimately arrived right on time, at 11:30.

Lady Iris put me to the task of mixing the martinis (stirred, not shaken--it bruises the gin) and, as we usually do, settled in to catch up on our lives, political frustrations, and the state of gay rights around the world.  It had been a long time since I'd had a martini.  There was a time when it was as mother's milk to me, but now that water is my preferred beverage, it took a bit of time to stimulate those old gin taste buds.  I nursed mine throughout the hours that I was there, and added quite a lot of ice to the original mix.  Ahhh...the days of my youthful debauchery are, I fear, dead and buried!

In time, we served ourselves salad and French bread and the movie started. We had a wonderful time reliving that witty dialog ("Life's a banquet and most poor suckers are starving to death!") and passing around the box of Kleenex toward the end.

This is never a movie that shows up on my "favorites" list, but watching it I remembered what a good film it was.  I read the book before it was ever a film.  Some people would classify it as a madcap comedy and there is no doubt that it is uproariously funny, but Rosalind Russell gives the high-living, hard-partying Mame such depth of character.  She champions diversity, equality, family love and the fine arts.  And she loves nephew Patrick, her "little love" in a way all children should know they are loved.

It was nice to visit with her again.

When the movie ended it was about 3:30 and I decided I'd better get on the road before rush hour traffic mixed with highway repair.

Most people never saw Angela Lansbury as Mama. She was brilliant and, yes, it's one of my favorites too. (Lucille Ball did not do the role justice.)

I'm glad you and Lady Iris had a nice lunch -- with fishberry jam.