A P.S. and Easter

I was standing in the shower thinking about yesterday's entry this morning and realized I wanted to add something to it.

Ned has said in the past that I spend a lot of time talking about getting old.  And I do.  Because I am.  And so is he (and maybe he doesn't think it's quite so odd to dwell on it now that he's older!).  But the reason I do is that I am finding the aging process fascinating.  I have read in many places that most of us, when asked how we feel, choose somewhere in our middle 30s as how we feel, mentally.  We don't feel our brain getting older and when it does, like with my mother, we aren't aware of it.

But you can't ignore those aging symptoms in the body and how it betrays the mental age where we feel we sit.  And, as I am fascinated by what goes on in the brain that brings on dementia and imagining what sorts of changes have happened to my mother that she is not aware of, or what is going on inside the head of someone incapacitated by a stroke--and are they aware of what is going on -- I am also fascinated by when these little changes in our bodies take place.  When did it become so impossible to reach something on an upper shelf that I now use a pair of tongs to help me?   When did climbing stairs become so painful (one of these days I'm going to pull the bannister off the wall trying to drag myself upstairs here in our house!).  I just find the whole process fascinating on a mental level and frustrating as hell on a physical one.  So I did the "baseline" entry so I could see, in a year, if I have deteriorated any more or if I'm holding steady at that point.

But let's talk about Easter.  Easter has been one of those holiday/holydays that has assumed less and less importance in our family over the years.   It was, I think, an Easter Sunday when we had to practically stand in the parking lot (where we could neither see nor hear) because there was no room inside the church that I decided to stop attending Mass. After that, for me, it became the secular holiday of Spring and bunnies and eggs, though Walt, the good Catholic, continues  to go to Mass and of course goes to Mass on Easter.   (It's a shame we will spend our eternities in different areas of the afterlife.   He'll have the air conditioning),

For me, it was about the dinner.  First I cooked a family dinner for many years, then Walt's sister-in-law took over hosting the Easter dinners and we joined with Norm and Olivia at their house, with a lot of her family. She set a beautiful table and it was always a gala affair, often with music from her talented family, which I loved. Then when my mother started feeling uncomfortable around large groups of strangers, we split up.  Walt would go to his brother's house and my mother and I would go out to dinner.  The kids joined whichever group they felt closer to at any year, if they were able to join us at all.

When my mother stopped liking to go out for dinner, I would bring dinner to her house and cook there.  Ned and Marta sometimes joined us, but it was too far for Jeri or Tom.  Now Walt's sister-in-law is taking an Easter cooking holiday, so for holidays, we go to the brunch at Atria, which was my plan for today, but when I went to make a reservation for brunch, I found they were full and I could not, so another plan had to be worked out quickly.

I decided that I would bring her here and would rent Philomena, which we still have not seen, and then I would cook an Easter dinner.  That way we could have lamb and not pay an exorbitant price for it (amazingly, I was able to get a small roast which is, while expensive, affordable).  And of course I bought ice cream cones for dessert, since she has to have her ice cream after each meal.

I had a good time shopping for dinner and even found a dozen roses for under $10.  Unheard of!  I decided to use my godmother's blue glass plates, which I love and which I claimed when we moved my mother up to Atria.  This was going to be the first "company dinner" that I have hosted in many years, even though there would only be the three of us.  "All that crap" still surrounded the dining area, but the table looked lovely.

In the early afternoon, Walt went out and got flowers to take to the cemetery (for Paul's 15th anniversary) and then we picked up my mother, who was astonished to learn we were going to have Easter dinner.  If only I'd told her she would have dressed up.  Guess the note on her calendar and the two phone calls weren't enough! When I picked her up, she said she was feeling disoriented today, as if she sometimes wasn't sure where she was.

We went to the cemetery, which, for a cemetery, looked beautiful today.  I was going to take a picture, and forgot. I got the flowers arranged in the vase at the grave site and we drove home by the "scenic route" (where I knew we would see lots of flowers, which she loved).

When we got here, we settled in to watch the movie, and the new smart TV froze.  I about cried, but I kept punching buttons, while my mother helpfully kept repeating that she was glad her TV wasn't so complicated.  I finally unfroze it, but while I know what I did, I don't know what froze it in the first place.

Halfway through the movie, Peach called to wish us a happy Easter and my mother was very happy to talk with her.  I meant to suggest she call, and am glad she thought of it by herself.  I had earlier showed my mother a picture of Bob that Peach posted on Facebook, which shows him looking like the Bob we all remember and I thought that would make her happy.  She said he looked familiar, but she couldn't place who he was.

I made a stupid mistake ordering Philomena.  Given the option of $5 for the movie in HD and $4 for it NOT in HD, I went with the cheaper option which gave us, not surprisingly, a vastly inferior picture.  I really don't know if my mother "got" it or not because later at dinner when I mentioned the movie, she said "oh?  Did you watch a movie?" I said that it was the movie, with Judi Dench (her favorite actress) that we had just seen, first she had this look like she didn't have a clue who Judi Dench was and then said that she was glad I had the chance to watch it.  But owell.  It passed the time.

When the movie was over, I went in and made some hors d'oeuvres, Walt fixed a vodka and tonic for us (which she used to have every night before moving to Atria, and just after moving to Atria).  I used the godmother's beautiful blue glass glasses, which I've always loved.  When I handed my mother her drink, she said, in a puzzled tone, "those glasses look familiar."  She took a sip of her drink and had one of the hors d'oeuvres (leaving 11 for Walt and me) and there didn't seem to be anything to talk about, because I had to be in the kitchen and Walt is not a conversationalist.

I remembered that I had a box of things from her school years that she said awhile ago she wished I'd bring to her apartment so she could go through it, so I brought the box in.  She found an autograph book from 8th grade and read through every page of it, though showed no interest in the rest of the box (which contained her high school Varsity letters, among other things).

Dinner was served and I very smartly let everyone dish up their own plates. As I knew she would, she had one small slice of lamb, a small spoonful of potatoes, a small spoon of green beans, and a little bit of salad.  But she ate it all, which was nice, and she didn't complain about the amount of food. 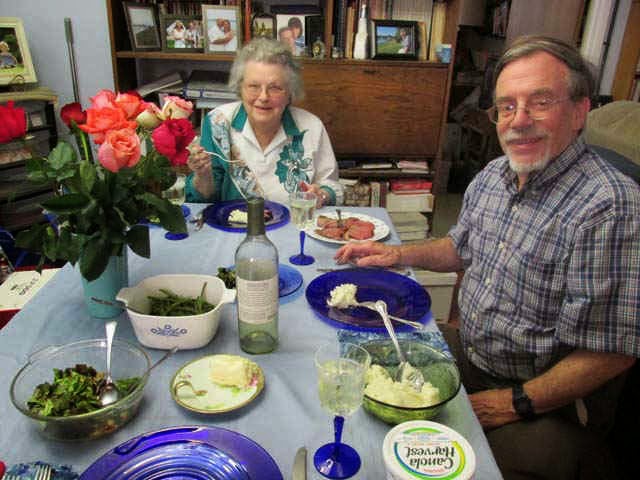 I had bought ice cream cones for dessert, which we laughed about, since that is her standard dessert order at Atria.

Once dessert was finished, I could see she really wanted to get home, so I took her home, and she apologized profusely that I had to drive "all that way" to take her home (all 0.8 mile of it!).

I had the feeling that she really would have preferred to have eaten at Atria and that this was not the treat I had hoped it would be for her, but that does take the pressure off me in the future. I won't go out of my way to try to find things outside of Atria to do with her, since she seems more comfortable just staying in her own little world.

She did say she wants a big party when she reaches hunnert, though.
Posted by Bev Sykes at 12:00 AM

Email ThisBlogThis!Share to TwitterShare to FacebookShare to Pinterest
Labels: Easter