A Day of Compassion

I try to send off letters to the Compassion Kids at least every other week. Sometimes I go three weeks, sometimes every week, but my goal is every other week. Compassion, Int'l has a wonderful way of reminding sponsors how important letters are to the kids. I've also come across wonderful blogs of people who are so organized with their letter writing and who have marvelous suggestions for how to be creative with the things we send to our sponsored children.

Michelle is a home schooling Mom who has made sponsoring chidren a family project and projects part of her teaching. She writes Blogging from the Boonies and I have been greatly inspired by things she has written about.

"Ava's Mom" has dedicated a whole blog to Letter Writing Ideas and has great photos of things she has sent to her sponsored kids and interesting ideas for how to decorate the letters themselves.

There are a few others I've started following, but these seem to have the most ideas I've incorporated. Of course I've had to learn a whole new way of looking at things, because religion isn't foremost in my thoughts at all times, as it is for these women--and more power to them for it. They frequently offer Bible verses that they have sent to their kids, and as my knowledge of the Bible is pretty skimpy (I was raised Catholic, you remember!), I occasionally borrow their suggestions to send to our kids, especially the two who are most hungry for conversation with me about the Bible. (Lotsa luck, kids!)

Today I had the house to myself so I spent the day putting together a packet of letters and "stuff" to send to each of the 7 children.

The letters are always relatively short (having pity on the translators), with longer letters going to Shallon (Uganda) and Fred (Philippines) because these two don't need translators (Fred's mother speaks English, and English is the official language of Uganda).

Sometimes I write one letter and copy it to each of the kids. I pretty much did this for five of them, telling about our week of sick mothers and sick Polly and asking each of the kids to remember all of them in their prayers (hoping God will take it retroactively, since it takes about 2 months for a letter to get from me to them!)

I also told Fred about my recent dental appointment because I had found a book of Bernstain Bears which had a story about the little bear going to the dentist. It was thin enough that it would meet Compassion's strict regulations about what can't be sent.

I had some car tattoos which I sent to Wainaina in Kenya. He's 14 and I don't know if he will like them or not, but I wanted to send him something. I haven't received a letter from him yet, so I have no feel for what he might like to have.

I had sent Pedro some games from a puzzle book recently. He's in Brasil, so I know he doesn't speak English, but I included some tic-tac-toe pages and a maze that I hope can figure out. I also sent him an activity book of Tonka trucks. I really don't have much of an idea what he likes since he rarely mentions things that I send to him.

I sent three of the girls gift bags from Christmas, each with a colorful poinsietta on them. You can't send anything that's not paper, so I had to remove the ribbon handles, but I thought the little bags were kind of nice.

I had made a photo collage for Shallon but I also sent her a Mary Engelbreit bookmark which had a place where I could insert her photo. I thought it was very cute. 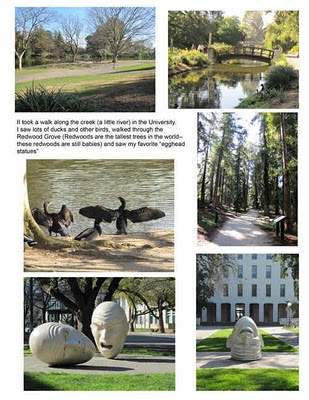 I'm really jazzed about these photo collages. I found a package of 8x11 glossy photo paper that I bought years ago and never used and I'm discovering that it prints beautiful photos to send off to the kids. I could cut them up into snapshot sizes, but I think the large size is really impressive. I'm thinking that next time I write, I will print my letter on the backside of the photo collage. (It's also a good thing to get me to go on these walks of mine, thinking all the time about what things might be of interest to the kids.)

So I'm finished for another 2 weeks and I feel good about the variety of things I found to send to the kids. I realized that some of the things I bought years ago for young children are getting out of date since the kids are growing up, so I'd better be more conscientious about sending things!