Oh Say Can You Hear

I finally had my long-awaited audiology appointment yesterday.

The office was in a Kaiser facility I had not been to before and I wasn't sure how long it would take to get there, so I left in plenty of time.  It was about an hour's drive, but I arrived 30 minutes early and had nothing to do but sit in the waiting room trying to find something interesting to take a picture of.

(I wonder what you can read into the fact that audiology and mental health are together in the same office.  Does being unable to hear properly make you crazy?)

I thought it had been many years - perhaps 8? - since my last test, but it turns out it was only 3 years ago.  Dr. Lowrie asked a lot of questions about what I am observing about my hearing.  She also asked if I had been exposed to lots of loud noise and I mentioned that I was mother to a rock band for 10 years!

I told her my main impetus for having the hearing tested again is that I'm tired of having to ask everyone to repeat what they say all the time, especially Walt, who tends to mumble while holding his hand across his mouth.  I also am missing more dialog when we see shows, especially plays (I love Capital Stage, which gives me a script of all the shows we see!)

Then I went into a little room, was fitted with earphones and did a hearing test.

When I was tested 3 years ago, I was told there was mild hearing loss which would qualify me for hearing aids, but I didn't investigate further.  There has been further deterioration, but not a lot.  It puts me on some volume levels at slightly below normal, and at other volume levels quite a bit below normal.

The doctor told me if I wanted to follow through with hearing aids, I could get them anywhere, but gave me the brochure from the Kaiser hearing center, where the cost would be anywhere from $1200 to $2900 per ear.

That's a chunk of money!

My decision now is how badly the hearing loss is affecting my life and if it's worth >$2,000 (2 ears) to improve it, or if I would be better off waiting another 3 years and see how far it deteriorates in that time.  It would be an easier decision if the hearing loss was more profound.  The recommendation is to be re-tested in 1-2 years.

It was nearly 3 when I left the office but I hadn't had lunch yet, so I drove around trying to find somewhere to eat.  This is a huge industrial area with lots of fast foods, but I wanted something other than a quick hamburger.

I found a restaurant called Noodle and Co., which looked interesting.  It's all things pasta, from Italian and Oriental and even mac and cheese.  I had a pad Thai which was delicious and came with lots of huge shrimp.  I was very glad I had ordered a small portion because the regular bowls that I saw being delivered looked huge. 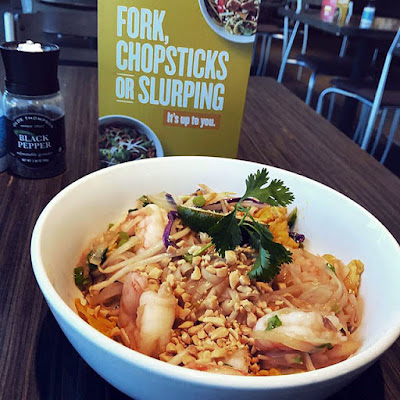 Email ThisBlogThis!Share to TwitterShare to FacebookShare to Pinterest
Labels: audiology

My father says to tell you that you might want to join Costco if there is one there. Their hearing aids are about half of that (or possibly less)