In April this year, I wrote a sort of obituary for Lamplighter John Rouse, who died at 66 of leukemia, diagnosed just 2 months before he died.  Professionally, John was a psychiatrist but he also sang with several different groups (including Yale's famed Whiffenpoofs when he was at Yale) and did so much more.  If Pasqual Calabrese had lived long enough, he and John would have been married.  Pasqual was the love of John's life and for the 30-something years after his death, there was never another relationship for John.

Today there was finally a memorial for John.  It took so long to put it together because people needed to come in from all over the country, four different groups had to get it together to perform, and it just had to be "right."

Walt and I allowed 3 hours  to make the hour and a half trip, allowing time for us to find parking, since this was in one of the parts of the city where it was very difficult to park. But we had not planned for the parking lot that was the freeway from Davis to San Francisco.  It was after 3 before we got to the city and nearly 3:30, start time for the concert, before we arrived at Calvary Presbyterian Church (what a beautiful, welcoming building!).

As we passed through Berkeley, the car went slow enough I was able to enjoy the kite festival off in the distances.

Finally, we were on the bridge and the city was in sight...then we just had to get to the opposite side of it.

Walt dropped me off at the church and told me he'd be there in an hour or so, when he had found a place to park.  But good old Gilbert, my parking angel, came through again.  Unbelievably there was a parking place right. across. the. street.

They hadn't opened the church yet but let me go in and sit down so I was able to see the Lamplighters' rehearsal of the magnificent "if these shadows have offended...."

John himself had helped plan the program ("he wanted music, more music, little talking, much fun and happiness") which started with his friends from Yale, members of the Whiffenpoofs, the Spizzwinks, the Yale Glee Club and Alumni Chorus, who performed several songs.  I hadn't intended to film "The Whiffenpoof Song," but in the end I did and am so glad that I did.  When do you get to hear that song sung by actual Whiffenpoofs?

That was followed by a beautiful rendition of Biebl's Ave Maria sung by a group known as "The Family."

Singers from the Temple Emmanu-el, with which John had sung for all the high holidays, performed two songs and then the Lamplighters did five numbers including the aforementioned "if these shadows have offended" (music by Arthur Sullivan, lyrics by William Shakespeare, arranged by Barbara Heroux), which has become de rigeur for Lamplighters memorial services.  We have heard it too many times lately.

Two of his colleagues talked about John, the doctor, and his contributions to the medical profession in San Francisco.

Then members of the American Bach Soloists came to sing three folk songs.

John chose a recording of himself singing "Ah, Moon of My Delight," recorded in 1994 with accompaniment by Orva Hoskinson, his best friend and voice teacher for more than 40 years.  Orva died three month before John.

Members of all the choruses joined together for two numbers from Mozart's Requiem and then it closed with a magnficent Toccata, by one of John's Yale professors, played by the organist John Walko.

There followed finger foods and wine and visiting with old Lamplighters you haven't seen since the last memorial.

All in all, it was a marvelous send off.  John would have loved it. 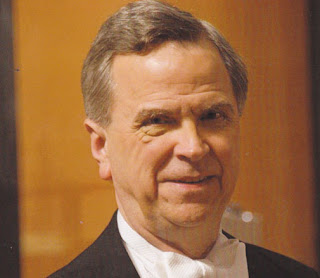