Tom cooked brunch this morning.  Even as a kid he was famous for his egg dishes.  Today he made a fritata that was fabulous, along with some leftovers from dinner the night before. And a tangerine mimosa

It was a laid back first part of the day, eating, watching football...and then came the deluge.  It was rain. Real rain! 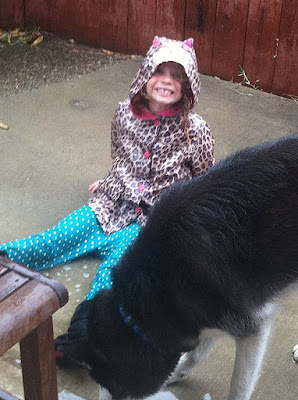 Bri was so happy that after jumping up and down and up and down many times, getting her pajamas all wet, she just sat down in a big puddle, a huge smile on her face and said "It's finally RAINING!"

Lacie, 5, who has probably NEVER seen rain before that she can remember, due to the drought, was more practical.  It was raining; she was going to get wet, so she went and put on her bathing suit with her rain boots. 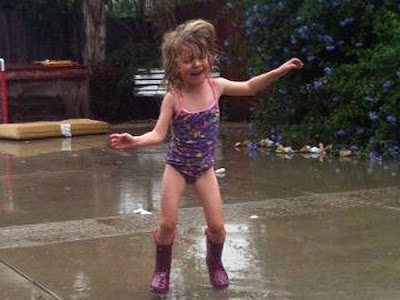 She has a shriek that would shatter glass and she used it over and over as she jumped in puddles in great glee.

It only lasted about an hour but it was wonderful while it lasted.

We watched football and the girls and I first played poker and then Go Fish.  For poker we used a desk of cards marked with the Dewars Scotch label and for GoFish it was cards from Ireland with the Guinness logo,  Then Tom showed me a piece of paper on which Brianna had been practicing her cursive.  I post it here, without comment. 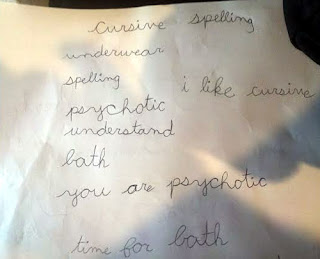 In the late afternoon, we went to the pumpkin patch.  I thought the trip would be postponed because of the rain, but no.  However the parking lot was a swampy mess and I was very happy I had my cane with me every time my feet started sliding in the goo.

We first stopped at the small petting zoo--2 goats, 1 mule, 1 pig and 2 turkeys. I didn't want to mention that it sounds like fattening up for a big banquet!

Next the girls wanted to go through the corn maze.  Given the condition of the ground, I was reluctant, but I also didn't want to be a party pooper, so, big breath and in we went. 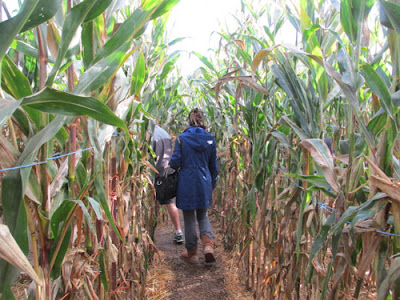 At first, I could keep up, but as we started encountering rows without straw on them and lots of puddles and muck, I started sliding and getting scared...I was also getting way behind (but Tom finally came back to walk with me)  I could just imagine the damage I could do to myself if I fell.  Finally we got turned around and Bri told us we were going the wrong way because we were close to the start not the end, but I just said I had to go out the start.  Besides, my hip was aching terribly and I just had to sit down. So grandma was an old poop after all, but then we headed for the PUMPKINS!

I found a nice hay bale to sit on while the others wandered out into the field.  I had to laugh when, surrounded by hundreds of pumpkins, Bri suddenly shouted happily, "Dad, I found one!"

Finally 3 big and 1 small pumpkins were chosen and Lacie helped pull the wagon out of the patch. 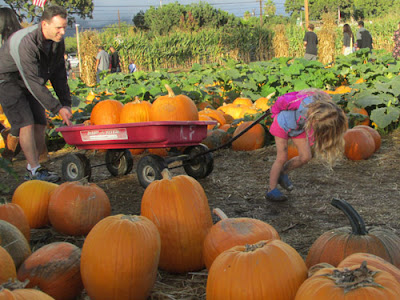 After the pumpkins were purchased, the family DID go all the way through the maze, so I didn't feel so guilty.


I thought our visit was finished but first we had a hay ride around the perimeter.  People sat on bales of hay in a big wagon.  It was embarrassing that I could not pull myself up and needed Tom to give me a push from behind, but though I was reluctant to do this, I really had a good time. 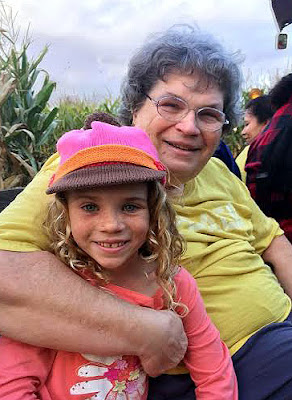 Last thing before we left the farm...Bri stopped to pay a visit to an old friend.  She has had her picture taken with him every year since she was a baby. 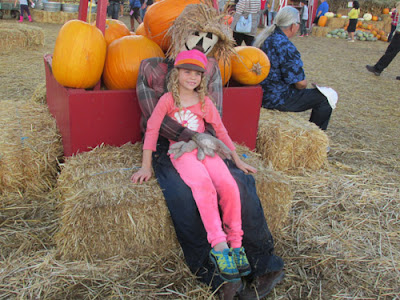 The family was going to go home and carve pumpkins, but I had hit the wall, so I said goodbye and said I would meet them at Bri's school tomorrow, where there is a performance. 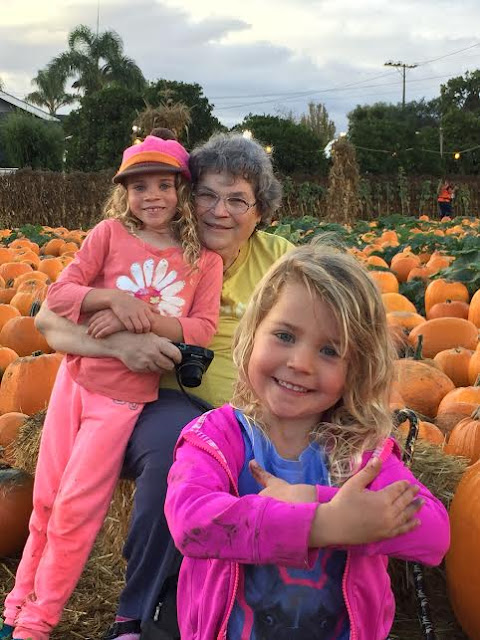 ah-HAH! I found you (well, I always knew you had this mirror site for your blog)! It looks like you and the girls had a whale of a good time out there in the punkin' patch.