In The Music Man, Harold Hill asks town bad boy, Tommy Djilas if he had ever done anything with perpetual motion.  "I almost had it once," replies Tommy.

Tommy needed to spend the day with Brianna.  As I watched her do laps around the house with the dog, Bandit, last night, I was amazed that she was still going at top speed, showing no signs of tiredness.  For my part, I drove home at 9, collapsed in a chair and literally could not move...and I hadn't really done anything but watch the girls much of the day...and I had even taken a break mid-day for a nap.

I went over to Tom and Laurel's at around 10:00 for pancakes and smoothies (banana, peanut butter, coconut water and "seeds") and then we were off to the soccer field for the girls' last games.  Though Bri is one of the two shortest on her team she is fierce. 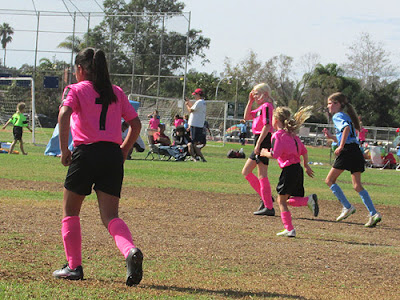 She even made a goal and her team lifted her up in triumph,.

Lacie, on the other hand, played some ...but really her heart wasn't in it today. 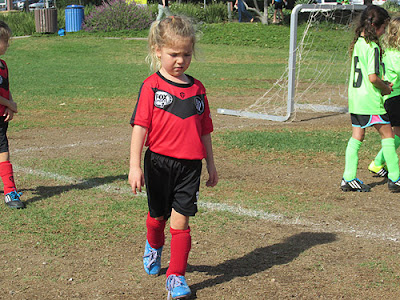 (note her shoes.  The other girls have regulation soccer shoes; Lacie is wearing shoes with a Frozen theme) 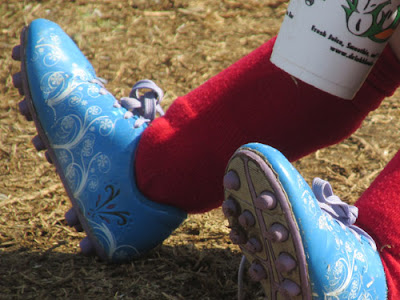 Tom is one of the coaches for Lacie's team and I marveled at how patient he was with his team of 5 year olds, which include two kids with "challenges." 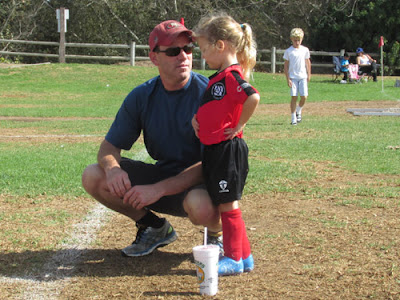 After the games we went off to a restaurant for an awards brunch, where the girls all signed each other's shirts as a farewell to the season. 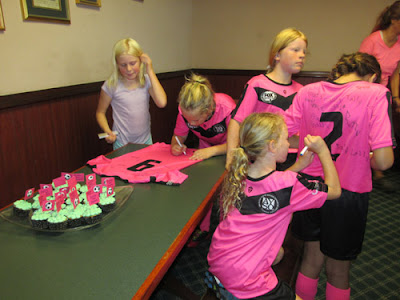 From there, the plan was to go to downtown Santa Barbara, where the girls were participating in a "flashmob" of Michael Jackson's "Thriller," in makeup.  I had received a text from Alice Nan with information about connecting to the internet and was anxious to try that.  I was also surprised at how tired I was just from sitting and watching the two games!  So I opted to come home, but from all reports, the flashmob was a great success. 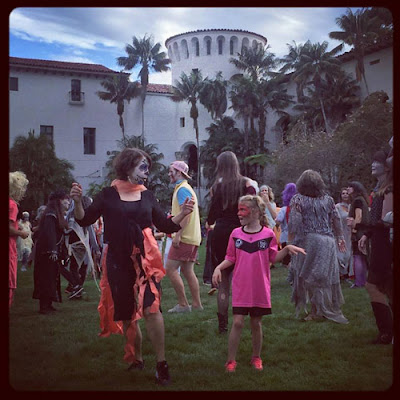 I was less successful at home,  I could finally get onto the internet, but with all of my attempts to use Joe's computer to get onto sites, I screwed up passwords, apparently and it all seemed so confusing that I decided to just skip trying to post Funny the World until I got home.  But I remembered that I could still post to Airy Persiflage, so have been doing that.

I also started taming DirectTV, writing down the number of the stations I visit most often so I don't have to scroll through 1000 stations to find one show I wanted to watch.  I now have my own guide and I am a happier camper.

Around 6:30, I went back to the house and found the whole family preparing dinner in the kitchen. 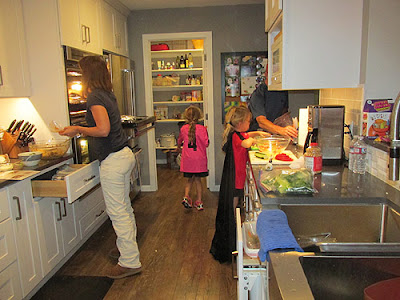 (Bri had been standing next to Lacie just seconds before I took this, peeling a carrot) 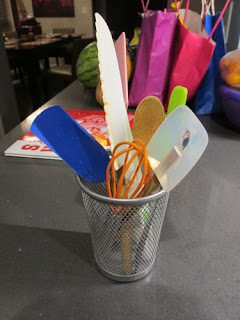 Bri may be the jock of the pair, but Lacie is the cook. Both girls enjoy helping in the kitchen, but Lacie in particular loves making food.  In fact, she got her own set of tools for her birthday (which had a "top chef" theme).  When I arrived she was slicing vegetables for the salad and then had her own pair of mini tongs to toss the salad.

Dinner was just a delight.  Listening to the four of them have real conversations brought joy to my heart. The girls are old enough now to have their own opinions and unafraid to express them.  One big topic was "Cotillion."  Laurel tells Bri that if she can't improve her table manners, she will enroll her in Cotillion where she will learn, among other things, how to behave politely at meals.

Bri reacts in horror and emphatically declares that she will NOT go to Cotillion because she will have to dance with boys, her face wrinkled in disgust.  "Who would ever want to dance with a boy? she asks.

It was impossible to get a picture of Bri playing tug of war with Bandit, but I loved this picture I took of the two of them the night before. 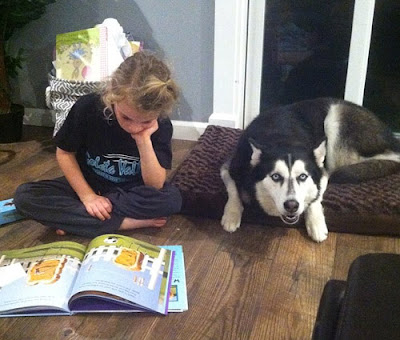 It was bath time and then story time (they are on Book 3 of the Harry Potter series) so I said goodbye and headed home.  I hadn't done anything all day but watch, but when I got to the house, I sat in the recliner and literally could not move.  I was asleep by 10:30.

Tomorrow we are to go on a hay ride and pick pumpkins.  "Good photo ops," Laurel tells me.
Posted by Bev Sykes at 8:18 AM