Technology continues to thwart me.  Today it is warm in the house and all I wanted to do was open the window, but can't find where it's locked.

I did get the washing machine working, so that was a good thing (it helps to understand the difference between "push" and "pull").  And since I could not get onto any of my regular web sites, I just used Joe's computer to check my email (which was being forwarded from my DCN account to my Google account.  I could get into Google).

But Laurel was at work, Tom was out of town, the girls were in school, so my plans for spending the day on the internet having been thwarted, I was left with how to amuse myself for the entire day.

I thought of going to the mall for lunch, but I pulled up the menu for Chilis, where I had thought of going, and nothing appealed to me and it was all too expensive.  I wanted to pick up toothpaste, Neosporin and Tums, but I just didn't feel like going out for just those, and there was nothing I needed to "shop" for (and I'm not just a "shopper" for the sake of shopping), so I just stayed in the house.

I must also add that I hate Direct-TV.  It is the least intuitive remote I've ever seen.  You can't find anything easily and it seems to be half home shopping stations, half of THOSE being for sex toys.  It's the first I time realized that a TV menu should be R-rated! I don't know how parents can let their kids browse through station options.  If you are looking to find out what station an upcoming program is on, lotsa luck with that.  The guide will confirm that yes, it is indeed coming up on xxx station, but do you think it will tell you the NUMBER of that station so you can switch to it when you want?  Noooo.  I have learned a little about how to use the damn thing, but oh how I long for my ComCast menu!!!

At least my Kindle worked and I finished reading "Merle's Door: Lessons from a Freethinking Dog" by Ted Kerasote.  I had been close to the end of the book the last time I was at Logos, but I was nearing Merle's death and knew that it would be a tear-jerker (and was I ever right!) so chose something else to read in public.  But here I was alone and could wallow in the story of Merle's death.

Merle was a stray that Kerasote picked up on a rafting trip.  They lived together 14 years and the book is a combination of their story and Kerasote's philosophies on a dog's brain, dog behavior, and his own belief in letting a dog make his own decisions (within reason).

Merle was a favorite of the small town in which they lived, and as he approached the end of his life everyone came to say goodbye and when he was buried, everyone came to his funeral (I'm crying as I write this).  It's an extraordinary book.  And I am SO glad I didn't try to read it in public!

In due time, Laurel texted that she was home from work and to c'mon over.  I packed up my computer, intending to post yesterday's entry using Tom's internet.  I was greeted by a friendly ghost. 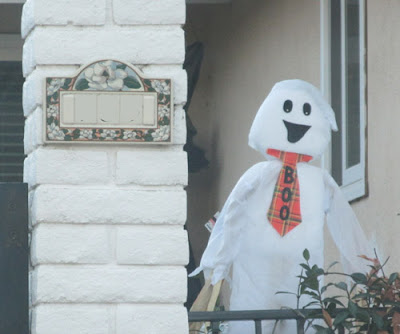 And first there were movies to see.  The girls were watching one of the Ice Age movies 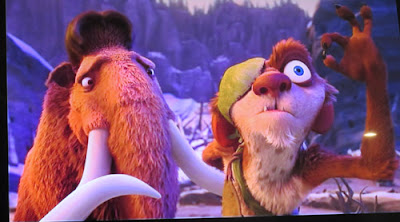 I'm afraid that the intricacies of the dialog eluded me and I never did figure out the plot other than a lot of running from meteors crashing into the earth, but it was nice cuddling with Lacie while we watched together.  Laurel was in the kitchen making a Blue Apron meal and I had a taste of what it must be like to be Walt every night!

After dinner, I set up my computer and Laurel gave me their password.  Only it didn't work.  I tried several times but no luck.  Tom had texted that his plane had arrived in Santa Barbara so I knew he would eventually be home, but it was getting late, the girls were into their nighttime routine.  Tom had been gone 4 days and I just felt I should leave and not disrupt things.  I had packed up everything and was ready to walk out the door when Tom arrived, but I didn't unpack and set up again.  He asked me if I had used their password...only the password Laurel thought it was had been one digit off.  Owell.  I was getting used to this internet vacation.

I came home, found a Star Trek TOS marathon, settled down and slept, more or less for 8 hours, with one interruption in the middle of the night.

In the morning I tried going on Joe's computer to check my mail, but it had rebooted itself sometime in the middle of the night, and needed a password to access, so so much for that idea.

But the girls are now awake and I can go over there.  I won't even take my computer with me.  I've resigned myself to writing these and posting "eventually."

Ironically, I had a text from Alice Nan asking me if I needed internet access.  Duhhh...is the Pope catholic?  But she wrote it last night and I found the text this morning (my phone does not alert me when there are texts, which drives me NUTS) and they were probably already on the road by the time I answered her.

I'm not going to take my computer with me to Tom's, but just enjoy the girls.  We are going to their soccer game this morning.
Posted by Bev Sykes at 5:11 PM