It's not often...in fact it's rare ... that I can fool the dogs. They have been carefully training Walt and me over the past few years and I suspect they think they are close to winning the battle.

We are creatures of habit around here, mostly because the four of us are home together all the time.  The dogs, bless them, are usually very patient with me.  No matter where I start the night, I usually end up asleep in the recliner.  Lately, after years of insomnia, I'm actually getting sleep.  I wake up in the middle of the night and move to the recliner.  To put myself to sleep, I have the TV on (lately I've discovered that Morning Joe is the very best sleeping pill, since it comes on at 3 a.m. here).  Even if I sleep as late as 9 a.m., as I did this morning, the dogs are very quiet and respectful, though they  are eager for breakfast.

But the second I touch the lever that lowers the footrest on the recliner, the dogs leap out of wherever they are sleeping and come running into the family room.  Lizzie is there for morning cuddles, Polly yeah, kinda wants to be cuddled, but even more she wants to eat.  NOW.

Walt never has to wonder if I'm awake or not because Polly starts barking immediately and barks and barks and barks and barks until she sees that their bowls are on the kitchen counter and being filled.
The day is pretty dull mostly with the dogs, exhausted from eating, spending the day recovering in their beds.  Once in awhile they go outside to see if there is anything interesting in the back yard.  Lizzie is amazing.  There is a spot in the yard where she stands and barks.  She doesn't seem to be barking at anything, but I swear if I let her she would bark in that spot all day, if I let her.

But after 5-10 minutes I call them in.  They come in, running, because they know that they will get a little treat when they respond.

On nice days, Polly spends a lot of time outside, and if I am in the recliner and decide to get up, she races into the house, doing her happy dance, barking and turning circles because she thinks I will give her a treat.  Sometimes  do, sometimes I don't.  The other day she went out to the patio, barked twice, then poked her head in the door and looked for me as if to say "did you hear that?  I barked."

I used to feed the dogs their dinner after Jeopardy.  When the "think music" for the final Jeopardy question came on, the dogs would get up and stand there looking at me. This worked well for a long time until we went away on a cruise.  Ashley fed them earlier and after we got home, there was no living with them until 7:30.  I finally agreed to feed them at  6 and since then, they have been trying to get me to feed them earlier and earlier.  I'll be in there in my office and I'll feel a nose pushing my elbow around 4 p.m., and when I don't move, they'll try again in a half hour. I refuse to feed them before 5 p.m., at the very earliest.

Even if they haven't yet started telling me they are ready to eat, all I have to do is get up to go to the bathroom an Polly starts barking and Lizzie starts leaping. I have put off going to the bathroom for as long as half an hour just to avoid Polly.

During the day they will interrupt me for three reasons:  Either they are hungry and want to eat NOW, or their water bowl is empty, or they want to go outside (we leave the sliding glass door oen for them, rather than using the dog door.  Not sure why.)

Polly has definitely become Walt's dog.  When she first arrived here (about 8 years ago), she was terrified and bonded with me, so she slept with her nose in my armpit and eventually felt comfortable enough to turn around and slept like a normal dog in my lap, and always slept on top of me.  Some time ago I realized that she was spending her time in Walt's lap.  I'm not jealous.  I think it's cute.  When she hears him coming down the stairs that little tale could take off like a helicopter, if she weighed less.  If he makes the mistake of walking through the family room without petting her, she stands on his chair and barks and barks until he comes back and pets her, then she lets him leave. She sometimes still starts out sleeping on me, turning and turning to find her sweet spot, settling down for about 30 seconds, then getting up and moving to a chair, where she spends the night.

Tonight the dogs were out in the yard, barking.  I suddenly realized that it was 5 p.m. and wondered if I could sneak into the kitchen and start putting their dinner together,  Their hearing is so acute that I can stand in the kitchen and whisper "treat time" and Lizzie leaps up from a nap and runs to the kitchen.

But I snuck out of my office and quietly picked up the food bowls and put them on the counter.  I opened the tiny can of dog food I mix with kibble.  I managed to get it broken up in their bowls and was just opening up the bin where I keep the kibble when suddenly they were there.  I don't know if it was the aroma of the canned food or the noise of the kibble as I scooped it up that made them realize I was ahead of them.

But I did it!  I managed to get their dinners mixed for them without any leaping from Lizzie or barking from Polly.

These days you have to find your triumphs wherever you can.

But speaking of triumphs, I met Ned at Atria this morning.  He had brought a watermelon and coffee cake for us to share with my mother.

I was pleased when we got to her apartment to see that the newspaper had been picked up again. When we went in, she wasn't there.

Ned decided to check the dining room, and left me in the apartment with his dog, Bouncer, the whiner.  Bouncer spent most of the time (15-20 minutes) Ned was gone (he called me from the dining room and said they were finishing up there) standing at the door whining. 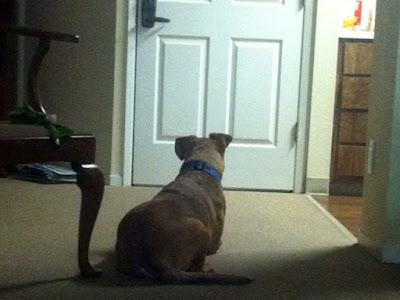 They arrived back at the apartment, my mother once again pushing her walker.  ("Is this my apartment?" as she sat down and looked blankly around the room.  I wish she could learn to recognize where she has lived for the past 3+ years.)

We had a nice visit, though most of the time she didn't make sense and when Ned and I talked, she usually didn't understand our words (but laughed about it).  "You know, I see you both speaking but I can't understand a single word you are saying."

But after the blow up earlier this week, it's been so nice to have three really positive days.  When she is good, she is very, very good...when she is bad, she is horrid.   And it's nice that Ned often brings out the best in her because Ned will not tolerate anything less than positive.
Posted by Bev Sykes at 8:08 AM

Email ThisBlogThis!Share to TwitterShare to FacebookShare to Pinterest
Labels: dogs, My Mother