1. What are your current obsessions?
Getting my new office organized and making pocket letters.

2. What are you listening to?
I'm sitting at my desk with my little TV at my elbow, listening to Law and Order SVU.  (I rarely listen to music when I'm at home)

3. Which item from your wardrobe do you wear most often?
It's summer with temps just about every day >90.  At home I wear shorts and a light weight t-shirt.  When I go out, I change into long pants, as light weight as I have. (Same shirt).  At night it's back in shorts and my Obama t-shirt.

4. What are you reading?
Billie Burke's autobiography.  It's a fascinating story.  It was originally written in 1948, but I am very much enjoying it. 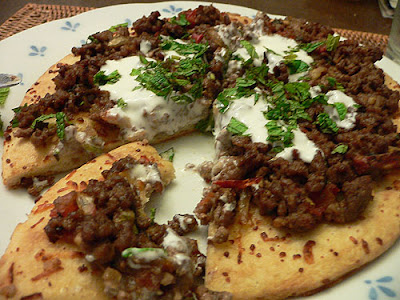 6. What was the last thing you bought?
Some Washi tape, which I need like I need a hole in my head, but it will be good to decorate the envelopes of my grandkids wen I write to them.

7. Guilty pleasure?
The Haagen Dazs snack bars Walt and I have after dinner each night.

8. What training did you get and how do you make a living?
I didn't really have any formal training.  I worked as a medical transcriptionist and my whole "training" consisted of my boss at a typing service tossing me a tape and a medical dictionary and saying "Here.  Learn this."  I worked at medical transcription for about 30 years.  Now I'm retired and work as a theater critic (which, in a good month, earns me somewhere between $80 and $100 for the month).  I had no training for this job either and have just learned as I go.  This is my 16th year reviewing.  I hope I've learned a few things since I began.

9. If you could go back in time, knowing what you know now, and choose a different career path, what would you train to do?
For one thing, I would finish college.  I had gone all through high school without so much as a D on my report card, and mostly As and Bs.  When I failed my first class in college (stopped attending because the teacher started hitting on me and I was too dumb to realize I should report him!), a college (UC Berkeley) for which I was woefully unprepared, I figured there was no way I could cope and just gave up.  With hindsight, I wish I had continued and followed some sort of English course to make me a better writer today.

10. What’s your best time of day?
Hmmm....I'm not sure.  I used to be best in the morning, but lately I've been sleeping late and feeling groggy when I wake up, so maybe it's after dinner...but I get sleepy then too....

11. Do you like being on a team or are you a solo player?
I'm the person sitting on the bench when all the team players have been chosen while the heads of the teams fight over who has to take me.  Thus, I am a solo player.

12. What’s your favorite way to create art?
Right now it's pocket letters.  I am having such a wonderful time creating them.  I just finishe my "dog" pocket letter and the partners haven't even been assigned yet!

13. Name three items in your refrigerator:
Patty, Maxine and Laverne.  Oh...did you mean LIST three things in my refrigerator?  a bottle of Chinese sweet hot sauce (love the stuff), 4 containers of cottage cheese (for the dogs), and ground lamb for mini pizzas tonight

14. Tell us about your first crush:"
Our parish priest, named Leonard Bose.  I don't have a clue why I had a crush on him. He was middle aged, short, bald and not very good looking. I think I deveoped a crush because he was kind to me, and people weren't necessarily kind to me when I was in grammar school.  I always think of him whenever I hear "On the Street Where You live," since I used to sing that song whenever I passed the rectory.

15. The first time that I became a boyfriend/girlfriend was with who, when?
I was 13.  Bill was the nephew of our neighbor, who thought we would get along.  Before I got to know him, he was in an auto accident and hospitalized with minor injuries for a week or so.  I went to see him every day and by the time he got out, we were making plans to go on a date. We dated for 3 years. 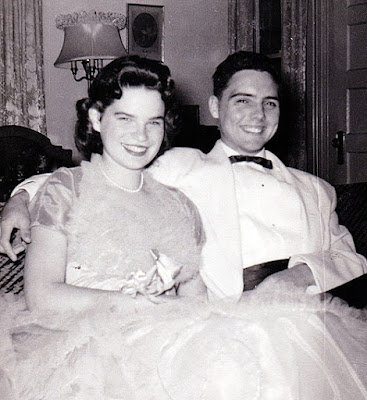 16. Do you remember what you did on your first date?
We went to see a Tab Hunter movie (I think it was The Girl He Left Behind).

17. How did you meet your current (or most recent) girlfriend/boyfriend/husband/wife?
Neither of us remembers.  We were both members of the Newman Club at UC Berkeley and we both went on a trip to Yosemite.  There are pictures of him and me on the same trip, so I guess we met there, but obviously it did not have a big impression on either of us, but we've been married 51 years.

18. How did your first romantic relationship end?
Bill joined the Jesuits.  He is a Brother (not a priest) and still there.

19. Do you remember your first kiss?
Oddly enough, no.