My mother has this odd verbal pattern.  She often speaks of things in threes.  It's worse now, with the dementia.  I can't remember when it started.  For a long time whenever she can't remember something, or can't figure things out, she will hit herself in the head and shout "stupid, stupid, stupid!"  She also does this when she sees old age spots on her arms and doesn't like them.  It makes me angry when I find myself doing the same thing from time to time and I try very hard NOT to.

But it's not only stupid-stupid-stupid.  When we go driving around in Davis, she often says "cars, cars, cars," when she sees cars parked on the street or in an apartment parking lot and then comments on how there are no old beat-up cars in Davis, but they are all new looking.

In the dining room, she will look around and say "people, people, people."  She always says "people" and "cars" in a tone that implies she thinks there should not be so many people or so many cars.  I never really know how to answer that.

But then she also often says "trees, trees, trees" when we are driving around somewhere green--and I know she loves trees.  And if we happen to pass a field of cattle, it's "cows, cows, cows," in a tone that asks "what are cows doing here?"

I think a part of this verbal oddity is that even pre-dementia she was ever the social butterfly who took it upon herself to keep conversation going.  Never to let silence just be.  In the days when she was still going to Santa Barbaa with us, I really got to hate the 8 hour drive because she kept herself awake and kept a conversation going.  Walt and I generally either drive in silence or listen to a book on tape.  It was exhausting to have to have an 8 hour conversation so that silence didn't bother her.  So I think that now when she has nothing to say, she can always say cars, cars, cars or trees, trees, trees and that kind of fills the vacuum.
Today we went to her last appointment at Kaiser.  Her wound is healing nicey and I have antibiotic to put on it daily until the scome off (unless her rubbing her face rubs them off, in which case we'll have to watch for another infection).

But the news was good and I told her that because she was such a good girl, I would treat her to an ice cream sundae.  I had decided this after yesterday's Chinese food lunch, which she seemed to enjoy so much.  There is a wonderful ice creamery, Fentons, in Vacaville, about 20 miles away, which makes outrageous ice cream treats and knowing how muh she likes ice cream, I thought it would be a nice treat for her.  I got her to eat another cereal bar for breakfast, so at least she has something slightly nutritious (but not much).

The place was full (people, people, people, kids, kids, kids, talk, talk, talk) and in that open barn-like restaurant there is no sound-absorbing material, so the noise level was high.  But we each had straberry sundaes which were very decadent.  Fentons' sundaes always come with a bowl so full that the syrup poured over the ice cream always ends up pooled in the saucer on which it is served

She ate every single bit of her sundae (as did I) and we went away happy and sated....and maybe a little big naughty!

I decided to go home "the back way," up Hwy 505 to Winters and then through the orchards back to Davis. What a GREAT idea.  She was in heaven with all the trees--and the vareity of trees.  I was happy to find a field of sunflowers that ere in full bloom and facing the right way so I could get a photo.

As we were approaching Davis she started yawning and I could see that she would take a nice nap when she got home.  She actually told me she had a nice day today.  I can't remember the last time she did that.

I'm going to have to find more activities like this, that take minimal walking and especially that are cheaper.  I've spent nearly $100 the past two days, but it's been worth it to see her enjoying herself. 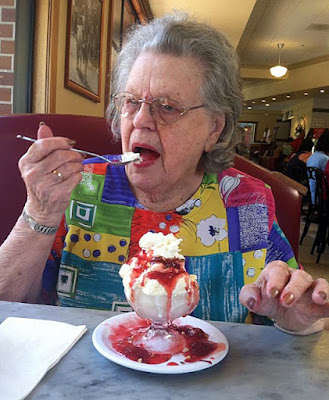 Email ThisBlogThis!Share to TwitterShare to FacebookShare to Pinterest
Labels: ice cream, My Mother