There was a rumor going around Mayberry that Barney shot himself in the chest and had died.  Actually, he just got a scrape on his finger, but like the old "telephone" game, each person who passed along the news to the next person embellished it a bit until the undertaker showed up at the sheriff's office to take away the body.

I couldn't help it.  They introduced Chris Christie and suddenly I just went into Convention Overload, realizing that the best (or worst, depending on your feelings) moments will be replayed endlessly tomorrow and I don't have to sit through every excruciating moment tonight.  I had messages from two friends that just said "I want to vomit."

I was watching the Stepford-perfect Trump children seated in the box, remembering that the son was one of those rich guys who pay thousands of dollars to go out and kill innocent big game animals and didn't know if I could stomach anything he had to say.

Mayberry was a nice alternative.  Two sweet little old ladies helping Andy find the stills around town so they could run their competition out of business.

Now and then I would switch back to the convention but couldn't stomach the sight of bloviating Christie indicting Hillary Clinton and whipping the crowd into such a frenzy that they chanted "lock her up! lock her up!"

What must other countries watching this be thinking?  A text message I received said "If some nut shoots Hillary, it will be Christie's fault."

I have never seen such hatred coming out of a political convention (and I hardly watched it last night!).  You don't see hatred like that in Mayberry, where everybody seems to like everybody. Even the town drunk is treated with respect.

Yes, I know Mayberry is a fictitious place and probably nowhere like that ever existed in this country, but when the ugliness and venom is flying thick and fast by the people who want to lead our country, it was nice to take a brief escape back into that fictitious place and to wish I could turn today's world off and just sit on the porch with Aunt Bea, singing a quiet song and listening to the crickets chirp. 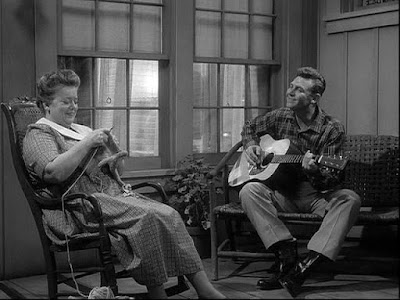