Today was not too busy, not too boring.  If I were Goldilocks, I would say it was "just right."  Apparently Sandy had a busier morning than I had afternoon.  She nearly filled one side of the sheet where we record transactions.

As Sandy was leaving a young girl dressed in many heavy layers (despite the heat), with hair that my mother, in her day, would call a "rat's nest", covered by a dirty brown piece of material.  She did have the look of a street person, though a shame, as she was so young.  She asked "There was a white book on the bargain table.  Did you sell it?"  I explained that I'd only been there 10 minutes and didn't know (and probably would not have known if I had been there all morning whether we sold a "white book")  She went back outside to the bargain books and came in with a book (all of those cost $1 each), clutching some sticky quarters in her hand to pay.  When she leaned over to hand me the quarter, you could tell it had been a long time since she had washed.  I felt sorry for her.

I didn't know what I  was going to read this week and when I went to check the Ruth Rendell books, I found that the book I either sold or gave away last week was back on the shelf.  I took it off the shelf and synced it with my kindle so I could go back to reading the story on a "real" book.

A guy came in looking for Susan, who was not there, and bought a 4-book set of Arabian nights, which he was going to pick up later.

Two girls looked around the store for a long time and eventually bought a book of short stores and a book on the supernatural.

A handsome middle eastern guy with a dark black beard came in and looked over the "old books."  He had a backpack which hung heavy on his back with lots of straps hanging, like the tassels on a  Jewish man's robe. It was a surprising electric blue in color (didn't go with the rest of his "look") but then I saw that the cloth had a pattern of soccer balls, so it made more sense.   He ultimately bought one contenporary fiction book and did not appear to speak English well.

Next, I got involved with Instagram and trying to decide what picture to take for my 100 Happy Days project and really didn't notice who came and went until an earth mother t ype in a long tan skirt, red top and stsraw hat gave me "The Goddess in the Hindu Tradition" to ring up for her.  Her purchase was $4.86 and she gave me $5 and told me to keep the change.  As she left, she wished me a Happy 4th of July.  Nice lady.

I looked around the store for a bit and found a book called "The Tastemakers:  Why we're so crazy for cupcakes but fed up with fondu."   It traces the food fads through the years and is fascinating.  I'm sure I will have a whole entry about cupcakes when I finish this.

Around 2:30 or 3, an Asian man with a very round bald head came and, catching me eating one of the crackers I'd brought for a snack.  He made a bee-line for the back aisle and I didn't think much more about him.

A couple who looked like they'd just come off the tennis court arrived.  She was a vision in pink with short-short pink shorts and a white sleeveless shirt with some sort of design on it.  She carried a small purse on a very long strap and had a bottle of Gatorade in it.  Best of all, she worse the best pink and black trainers. 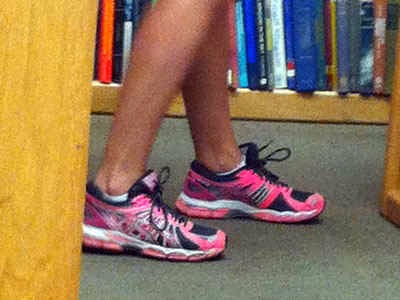 I didn't really notice him at all, but that's OK.  They left without buying anything.

Two boxes of donated books arrived.  Sandy said she had donations in the morning, including a whole bunch of books by Margaret Frazer, who writes Sister Freuisse Medieval Mysteries.  Kind of the female counterpart of Cadfael.   I'd like to see what they are like.

I went to the bathroom in back and on my way, noticed the Asian guy with the round bald head standing by the book shelves taking pictures of book pages with his cell phone.  When I returned it was 4:20 and My friend was standing outside looking through the bargain books and the Troubador had also just arrived.

My friend bought a bargain book and a German Diarama book.  I don't know the date on it, but it seemed pretty old and he said it folded out into a full zoo scene.

The Troubador bought a book on Lewis and Clark and when he left I noticed that the Asian Guy with the bald, round head had moved to the front table and was reading there.  At 5 p.m. (2 hours after he arrived) he was still there.

A woman on the chunky side, dressed in black and wearing a floppy straw hat wanted to know if she could get "change and a book." I was instantly on alert because someone -- maybe me -- took in a counterfeit $100 bill sometime during the past week.  I didn't realize we had a pen to check for counterfeit bills.   But she only wanted to give me a $20, and then complained that the book she chose, about trail riding on horses, was too expensive ($4).  She said she had never paid that much at Logos before.  I suggested maybe she'd only bought bargain books.   She was kind of nasty when she handed me her $20, so I checked to make sure it wasn't counterfeit (it was not)

The next girl had a big nose ring that made her look like she was related to a cow, which was too bad because she was a nice slim woman.  I've seen nose rings before, but never anything quite this big. She bought a bargain book.

5:30 and the Asian guy with the bald, round head is still reading at the table.

A woman walked in the door holding a large clear plastic bowl with a rounded clear plastic cover.  I decided it was eithewr a terrarium or a salad.   (I think it was a salad, but she didn't buy anything so I didnt get to see it up close)

An artist in a heavy tan kilt, pink flip flops and a white-ish t-shirt with either an orange and yellow design, or orange and yellow paint splotches came in.  His hair is unkempt and he hands me an invitation to an art show he is having, using found objects.

A woman bought five books, including one by Jodi Piccoult.  She asked me if I had read her.  I knew I have a book by her on my iPod and thought I had read another one, but I discover I had mixed her up with Janet Evanovich, so now I have to read Piccoult too.

I noticed a girl had parked herself, sitting cross-legged on the floor with her back against the book case.  She was reading.  It was 5:30 and the Asian guy with the round bald head was still there.

I was relieved by the store manager (whose name I can never remember), and then Walt came to get me.  When I left at 6, the girl was still sitting on the floor and the Asian guy was still sitting at the table, having been in the store for more than three hours.

I'd like your take on Jodi Piccoult. I found all of her books that I read to be interesting, but they were also disturbing. I decided I would not read any more.

I love library and bookshops. I love reading books :D