A Couple of Hours I Won't Get Back Again

I had a call this morning that really surprised me.   It was from Barbara, whom I used to know some 30 years ago.  At the time she was a new Mom and her husband was writing some solemn papers for the art department, of which he was on the faculty.

Our relationship didn't last long, but was intense for maybe a year or so, while I was doing LaLeche League, I think.  So imagine my surprise to see her name on the caller ID of our phone.  But her reason for calling was even more surprising.

She said that she has received calls for the last several days from our phone, which are telemarketer calls for some insurance company.   I assured her that they were NOT from us and said I would call AT&T today to find out what is going on.

I was going to have lunch with my mother in about an hour, so I decided I would get to the bottom of this matter right away and still have time to get to Atria in time.

Remember those days when you could dial "O" and the operator would answer and if she couldn't help you, her supervisor could?  Those days are long gone, my friend!  I dialed O and got into voice mail hell, but I expected that.  I answered all questions to the best of my ability and finally, after an 8 minute wait, got a live person.  I explained my problem and he said that he could not help me, but would connect me with someone who could.  What he connected me to (eventually) was the do not call list, so that I could add my information so I would not get calls I did not want any more.  Well, that was a bust, but it was time to go to Atria, so I resolved to call AT&T again when I got back.

Lunch was fine.  I wonder, sometimes, what her lunch partners think of my mother.  I've noticed more vagueness at lunch now, which I didn't in the past.  I wonder how many times she has told her table mates that Atria must require servers to have long black hair and make them wear it in a pony tail.  I know I've certain heard that a lot.  She's at her best when there is someone whose dementia is in about the same stage.  Then they talk and laugh together, they don't have a clue what they are talking about, but they don't care.

But then the waitress, who is generally pretty sharp, and one of my favorite waitresses, was having an off day too.  My mother ordered a hamburger and she brought her soup and later gave me a dessert I didn't order.  But she did get me a second caraffe of ice water, so I forgive her anything for that.   She's the only one who brings extra water. 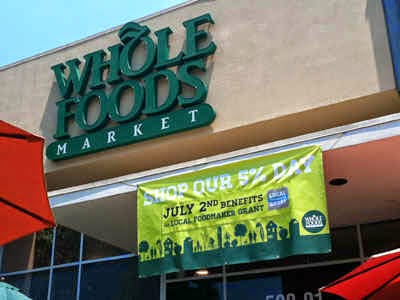 5% of all proceeds were going to a local organization, which just so happened to be Stone Soup, a catering service owned by our friend Sarah Clanton. There was as huge campaign to vote for Sarah over her two competitors.  One competitor was eliminated pretty soon, but it was neck and neck until they closed the polls, and when votes were counted. Stone Soup was the winner.  So today was the day they were going to share the profits and I felt I needed to help there too.  I didn't help much, but I did buy about $40 worth of food (including something called "beet chips" for Walt).  Probaby would have done her more good if I'd handed her $5 as an outright donation, but she will get $20 from my purchase and it was for the fun of feeling a part of it.

When I got home, I was ready to tackle AT&T again.  The first call went the way my previous call had gone, but when he was at the point of transferring me, I made SURE he was tranferring me to another person, not a recording where I could opt out of telemarketer calls.  He assured me that he was.  But I swear the guy he transferred me to was sitting next to him because I went through exactly the same process with him with the end result was that he was going to transfer me to his supervisor, and then disconnected me.

I think I did that twice, but now I'm not sure (this was an Atria day after all).  Ultimately, I gave up on the telephone and decided to try the internet.  I could not access my account because they had no record of my ever having an account.  So I decided to try their customer chat line.  Here I talked with Anthony.  I don't know how many calls those guys handle at the same time, but it took an eternity from every time I would answer his question until he would respond. At one time he hit the wrong canned response button and up popped a lecture on texting and driving and asking me to take the pledge and how I could use other options to get AT&T help.  He did -- eventually -- have the good grace to apologize for posting that.

After I had -- I thought -- explained the situation clearly (Someone has hacked my telephone number ID and number and people are getting calls from US about some insurance company) he asked "Beverly, From where exactly are you getting calls from?"

Anthony *** I *** am not getting calls. OTHER PEOPLE are getting calls from ** ME **. I had a call from someone today saying she has received calls for the last four days from a caller ID with our name and our telephone number, but did not originate from our phone.  Who knows how many other people think we are sending out robo calls?

(I wonder how many other people do a copy of these customer service calls!)

After a very. long. time, Anthony told me he could not help me but that he was transferring me over to his supervisor Vince.

All I got from Vince, after "hello" and then a VERY long wait (3 games of solitaire) was "I will escalate the issue to our back office myself, so that they can block this type of calls to prevent any inconvenience in the future."   Suffice it to say I am not holding my breath that this will actually happen.

In the meantime, my friend Sheri, who is an IT guru, was letting me know about "spoofing," which is what  this practice is called.

It's happening all.the.time. Telemarketers want you to think the call is local, or from a government agency, or a bank that they hope you do business with), etc. I don't believe there's anything you can do to stop it.

It's illegal, but no one seems to be doing anything about it. You can contact the FCC, but really not much they can do. Google "spoofing caller id" for more info. I no longer answer my home phone unless I'm absolutely sure I recognize the number as someone I know.

Of course in this case the person receiving the calls did recognize my name, which is why she answered.  In any event, I dashed off a letter to the editor letting folks know that any telemarketer call they received from my name is not me.  And I will figure this is all I can do.

But there is a lot I could have done in the hour and a half I spent on the phone and chat line trying to find out about this!!! 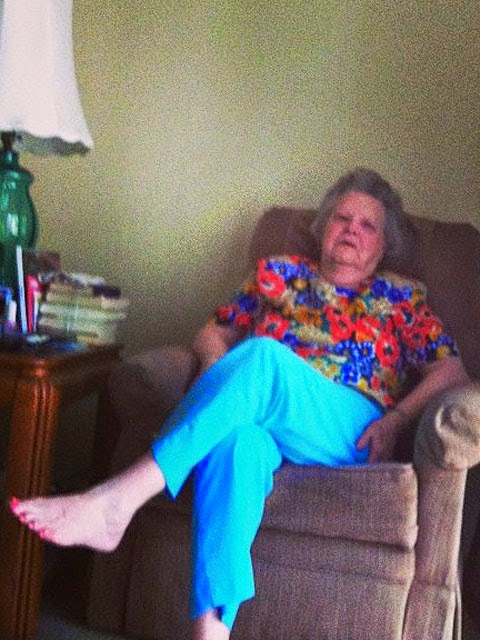 Day 2:  Ready for lunch with my mother.
(notice her toes?)

I don't know whether you saw my own scary experience in the same vein:
http://l-empress.liscious.net/older/010330.html

At least I know I am not the only one. The robo callers have caught on to those of us who don't answer unidentified calls.

AT&T is out of the customer service business.

I'm getting calls showing they're from our area, too. The first one I noticed was only two digits from our phone. When I googled the number it turned out to be the fax number for our local FedEx store. At least I know now not to answer that one.

I just got caller id. How did I ever get along without it? Good luck with your phone issue. Spoofing is scary stuff.