I am listening to Jane Lynch's autobiography in the car and am really enjoying it.  She pulls no punches and lays it all out there, the good, the bad, an the ugly.  In fact, in the early chapters the depricating may be over the top.

But one thing she talks about is what a bad student she was and how that was just accepted by her family, which seems to have been long on personal satisfaction, and short on personal achievement.  (The drinking may have played a part in that).

I have to admit that reading her less that stellar achievements in college (I have just gotten to her early years, so things may change as I read...) got me to thinking about my own not only "less than stellar" but downright failure in college.

In the late 1950s, the competition was less stiff and it was fairly easy to get into UC Berkeley.  I was a good student, always in the top 3 in my class, and had good SAT scores so when my father decreed that I was not to take a year off to work, which I wanted to do, but that I was going to go to Berkeley and become a teacher, I was a UC Berkeley student, set on a career that I knew from the get go I did not want, but there to fulfill my father's aspirations, as he had failed his college career and I was to do what he could not.

The first problem was that with that whole little "entering the convent" detour I took, I didn't enter Berkeley with most of the other incoming freshmen, but entered in January instead.  This meant there was no freshman orientation.  I was the very first person on either side of the family to attend college and I guess we all assumed that it was just like a bigger high school.   I had no guidance with choosing classes, didn't know what an "advisor" was, didn't know about pass or fail classes, didn't know anything, and being too shy to admit that, I just stumbled along and did what I thought I should do.

I didn't know I needed to have a permit to attend classes.   Someone asked me if I had one and I had to learn about that.  I also did the very stupid thing of taking my roommate's advice and taking a speech class instead of a writing class because she assured me it would be an easy A.  Well, for someone terrified of public speaking (which she certainly was not), and fairly good at writing this was a really dumb decision.

I also needed a science class and I was told that Physics 10, taught by Nobel Laureat Owen Chamberalin (for whom I would actually work later) was another easy A.

I can truly say that the only thing I learned about Physics was what the Doppler Effect was ("the change in frequency of a wave for an observer moving relative to its source")  I don't know what that means either, but every time I hear a train pass and listen to the sound get louder and softer, I know I'm listening to the Doppler effect.

The only reason I know this is that I was dating a guy whose name I can't remember.  All I remember about him is that he was very tall and somewhat blonde.  I didn't date him long.  But he decided he was going to tutor me in Physics and he drummed all the technical aspects of the Doppler effect into my head so thoroughly that I think of him  every time I become aware that I am listening to the Doppler effect.

I would go on to flunk out of UC Berkeley gloriously (once I got the first F of my life, I knew I could never make it up so never even asked about how to go about it).   But I got my revenge by getting what was my very favorite job over my life time, personal secretary to 3 professors in the Physics Departent.  Chamberlain was not one of my regular bosses, but I did do a project for him and also for another Nobel Laureate, Emilio Segre.

As I recall, neither project mentioned the Doppler effect.


I am starting a new photo project, this one is the 100 Happy Days project.   It's been going on the internet for awhile now, but The Today Show started their own version of it and invited viewers to post their own "happy pictures" to Instagram and tag the Today Show, so I started today.  The "Photo of the Day" for the next 100 days will be my contribution to the Happy Days project.   Today's is a little blurry, but it's someting that does make me happy. 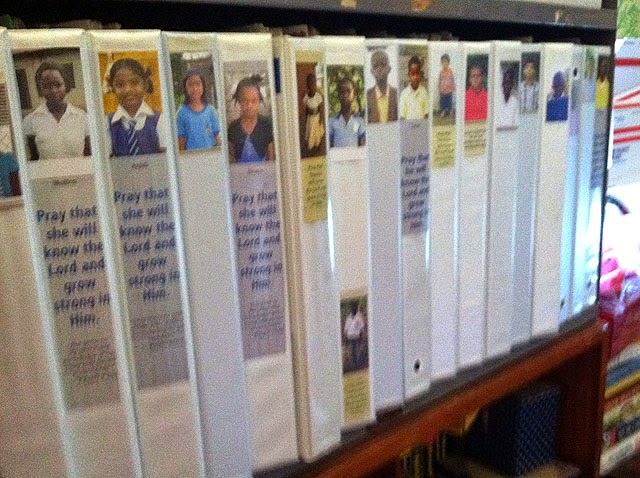 These are the individual binders for most of my Compassion kids.  They hold their letters and communications about them.
Posted by Bev Sykes at 7:47 AM

This is a fantastic idea. I love what you do with the compassion kids and there definitely needs to be more people like you supporting these wonderful children !

Ah university! I was the first member of my family to go to a brick&mortar university too (my mom went to a correspondence university). Over here in the uk you only do one or two subjects (we had loads of US students who visited for a term and stayed cos it was so much easier) and I chose the easiest subject with the most free foreign holidays, it was totally the wrong way to get into my preferred profession but I figured going to uni was just what everyone did. Waste of three years lol. I'm glad you got the job you wanted, working with Nobel laureates must have been so cool!

so cool that you sponsor so many Compassion children. so cool! and the 100 happy pictures? looks interesting.