One of our death watches has ended. Nora went home at 4:45 a.m., Ireland time, today.

It's amazing how she feels such a huge part of my family, when she was no blood relation at all. She was Walt's mother's cousin and Alice told us tales of her first trip to Ireland as a young woman, when Nora was a little girl. Later Nora would tell us of her strong memories of Walt's mother coming to visit for the first time and how she loved Alice's long hair.

We met Nora when we went to Ireland for the first time in 1988. This was our big trip, spending my father's savings, taking all seven of us to England and Ireland. We had contacted Nora and told her we would be arriving and I guess made arrangements to call her when we were settled in our hotel.

It was mid-summer, so it stayed light very late. We called her when we settled in and she came to meet us--but it was about 10 p.m. and the only restaurant open in Dun Lahghaire, where our hotel was, was McDonald's. So our first taste of "Irish cuisine" was a Big Mac!

We went back to Ireland a couple of years later, without the kids, and used Nora's home as a base of operations while we explored the country. Nora also drove us around to various scenic spots. I remember her taking us to the family pub south of Dublin, where she was greeted as a queen and we were taken to a semi-private room away from the crowd in the main pub--we later learned this was considered a very rough crowd, which is perhaps why we had a private room!

She was always so gracious to us and regaled us with her stories and took us to wonderful places like Glendaloch and Powerscourt that we probably would not have thought to explore ourselves.

I don't remember how many times Walt and I traveled to Ireland to visit Nora and Walt went once or twice by himself. I loved spending time with her and getting to know her children and grandchildren.

Nora and grandson Howard in 1996

I never saw a grandmother so proud of her grandchildren and so involved in their lives She was an inspiration and the kind of grandmother I wanted to be...but I live 300 miles away from Brianna so I can't be part of the carpool and the babysitting committee.

Nora never thought she would be able to come to the U.S., but she actually made two trips here. Her (cousin?) died and left her some money, so she came to California and we had such a wonderful time showing her the state. I always remember how she changed my perception of the hills around here...and how it's all in how you look at things. Each year, I love the rain because it turns the hills a beautiful lush green and I hate it when the weather starts to warm up and the green dies and all you see is dead vegetation covering the hills. But Nora said she loved our "golden hills" and how tired she got of seeing "green" all the time!

I can't find my favorite picture of us, but it was taken at Yosemite and it had started to rain. We bought cheap white ponchos and there is a very funny picture of us all huddled together looking like a gathering of the KKK. We laughed a lot. We always laughed a lot when we spent time with Nora.

The last time I saw her was at Alice Nan's wedding in 2006, the last time she came to this country. She came with her ex-daughter-in-law and I took the two of them traveling while wedding preparations were taking place. The best memory of that week was the bunch of us going for manicures and pedicures.

She dabbled in computers, but never got the hang of email. But still she was able to have a Skype conversation with Alice Nan and Joe earlier this month and her daughter Ailbhe sent a photo from that session. Her daughters had fixed her hair and makeup so she would look good for the webcam.

Nora liked her cocktail and Paddy's was her whiskey of choice. Tonight Walt and I will have a glass of the Paddy's whiskey he brought home from Ireland the last time he was there and we will raise a glass in Nora's memory.

She was a very special lady. 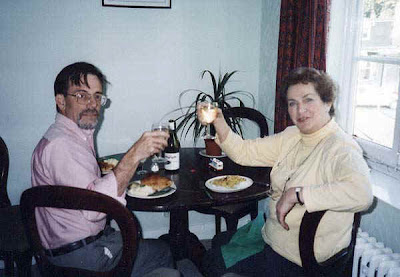 Email ThisBlogThis!Share to TwitterShare to FacebookShare to Pinterest
Labels: Nora

So sorry for the loss of such a dear friend .

What wonderful memories you have! I know how much you will miss her. It's not easy, even when expected.