Not the rainy kind, the baby kind. Today was the baby shower for Alice Nan's husband's daughter, Jocelyn. Most of the (50?) guests were members of the family, whether ours, Joe's, or Joe's ex-wife's family.

It was held in a park way the heck and gone up in the mountains. You really had to know this place was there, but it was lovely. Lots of trees making lots of shade, a huge reserved area, an outhouse that didn't smell bad and almost nobody else anywhere around us.

Joe and Alice had worked their tails off getting this party put together. Walt and I and Joe's mother and sister were the first to arrive. Joe's mother, Evelyn, is a fiend at card playing and immediately pulled out some cards and challenged her daughter's S.O. to a game of double solitaire.

He lost and asked if I'd like to take his place. Evelyn and my mother have spent many hours playing cards over the years, so I said I would love to--and then trounced her two games in a row. My mother would be so pleased!

YaYa is Jocelyn's grandmother and her real name is Patsy Garrett. If she looks at all familiar, she was the actress who owned Benji in the Benji movies. In a small world story entirely too complex to explain thoroughly, it turns out Patsy lived next door to the sister of our first Brasilian exchange student, Eduardo and Joe has been good friends with Marissa and her husband for 20 years or so.

Briannna didn't make it to the shower because she had been to a birthday party, but Tom did. He and Walt chatted over guacamole.

There were lots of gifts to open.

And lots of cake to eat.

There were games to play and Tom and Walt shared a prize for correctly naming the offspring of various animals.

And to end the party on a rather unusual note, someone had brought a BB gun and people started shooting out the balloons which had decorated the area.

When everything had been packed up, Walt and I, Alice Nan and Joe all went to Tom's for pizza and to be part of the nightly bedtime ritual. Bri had a 2-1/2 hr nap this afternoon and was in the best mood I think I have ever seen her. Of course it didn't hurt that she absolutely adores Uncle Joe and really turns on the charm around him. She was just so funny to watch. 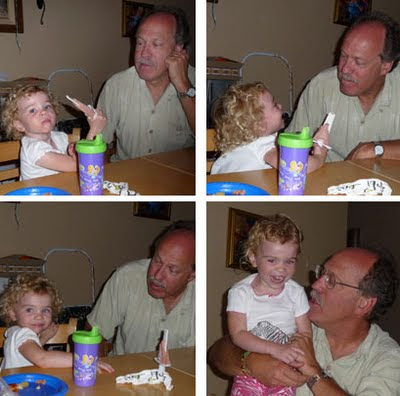 Tomorrow morning we head home, with a brief stop to do a Lamplighter interview en route.

I remember Patsy Garrett and Benji . Wow that is awesome . I loved those movies . Glad you all had such a great time .

I knew Patsy looked familiar, but I never saw the Benji movies. So -- compulsive that I am -- I looked her up.