I hadn't seen a smudge like that in 14 years.

The last time I was at The Hotel Utah in San Francisco was New Year's Eve, 1997. We were there the previous year, too, when Lawsuit played its farewell concert. Lawsuit had played the Utah a few times before and it was a nice sentimental place to call and end to the band's 10 year career.

A year later, the owner convinced the band to return for a big reunion concert. The tickets for the event sold out in 30 minutes. We were all there to see Lawsuit play together for one last time. The show was good, but it was clear that the magic was gone and that there would be no future reunions.

But Walt and I were back at the Utah again tonight, this time for an evening that was part of the International Pop Overthrow (IPO), which is held every year in August. Jeri is usually here at that time and gets together with some of the old Lawsuit group in a new band called Preoccupied Pipers. They do one ~20 minute set as part of an evening showcasing bands from around the area. She's been doing this now ever since she moved to Boston.

This year IPO was at the Hotel Utah for the first time and we decided to go down and listen to the band. We paid our money at the door and got the familiar hand stamp. We greeted the kids and were ushered upstairs, where they had saved a corner for us, so we could sit down. Ned handed me his camera and asked if I could take movies, and Jeri asked if I could watch her bag for her. I felt as if I had gone back to the old days when all the parents would come to all the Lawsuit concerts and we would do stuff like that for our kids. It was kind of nice to have my very grown up children asking me to watch their stuff again.

We sat through the 2 bands that preceded Preoccupied Pipers and I sorely missed the ear plugs that Jon Lee used to pass out to parents at Lawsuit shows. I thought of the irony that I had canceled a doctors appointment this morning. I was going to get my hearing checked because of some problems I've been having, but the problems seem to have cleared up a week ago. But the thought of going to have my ears checked in the morning and then going to this ear-shattering concert in the evening was strange.

It was fun seeing the kids back in action again. I only took a few pictures because I was busy working Ned's video camera. I also took a very short video, which I took with one hand while operating Ned's camera with the other! (I will post that tomorrow, after it has finished uploading--it's nearly 2 a.m. and I don't want to sit up and wait for it!) I thought at the time that someone with a camera downstairs might get a better picture of ME trying to handle two cameras simultaneously than what I was filming downstairs.

It was so much fun seeing them up there on that stage again.

The band this year consisted of KC, Jeri, Joe, Marta (on bass) and Ned, with Kag and Barbara joining in on a couple of the vocals.

He was introduced as "Jiminy Hendrix" and rocked the house in his one number.

He is flying back to Boston on Saturday while Jeri is going to stay through the middle of next week. Phil came out early to go to a Phish concert with Ned and their friend Jessica near Seattle. He has apparently been having a great time while he's here.

Jeri arrived on Saturday and is doing her usual "fit everyone in" tour, having already spent 2 days with her grandmother, then coming up here to see friends in this part of the state, spend some time with us, and get together with some of the pinata people too.

August is usually a fun month. 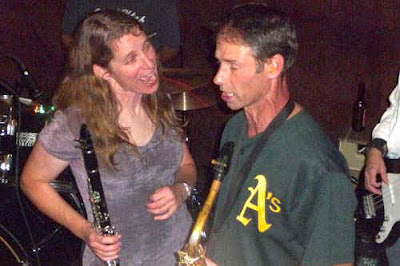