A Wake of Sorts

The traditional Irish Wake was commonplace around Ireland up until about the 1970's. This was the process of Laying out the body of a departed relative in the house where they lived and /or died. All of the family and quite a few of the deceased ones neighbours and friends would gather at the house. The body was usually in a coffin in the parlour of the house or living room. There would be lots of food and plenty of drink to be consumed. People would come and socialise and remember the departed person's life. This wasn't a time for tears to say the least, it was more of a party than a funeral. It was the traditional Irish way of celebrating one's life and ensuring that they had a good send off. A proper Irish Wake is worth the time and effort required to return to the old customs. It is hard to imagine a passing being complete without one!

Well, the body wasn't there, except in lots and lots of photos, but otherwise we probably had ourselves a good ol' Irish wake, that lasted all day and took place in more than one location.

The day started out with everyone except me, the heathen, going off to Mass. While they were cleansing their souls, I was cleansing my body. Then I took off for downtown to get a book printed and bound at Kinko's. In 1987, I did an interview with Alice, transcribed it, had it bound, and gave it to everyone in the family. This was the interview that gave me the information about Teddy Roosevelt and Will Rogers...only I mis-remembered and it wasn't Roosevelt, it was Warren Harding (go father back than FDR and they all sort of blend together for me!).

I remember at the time being a little disappointed that there seemed to be so little interest in it when I gave everyone his/her copy. But suddenly it has become a family best seller. Alice Nan couldn't find her copy so asked if I would bring our copy with us. The Baur side of the family hadn't even heard of it, so I had copies made for all of them as well. I left my book at Kinko's and they promised to have it for me by the end of the day.

The Baurs had all arrived by the time I got back and the photo project was in full swing.

While the women were choosing and arranging photos, the men were in the kitchen talking sports.

I was tearing my hair out trying to get photos printed, which involved using a strange computer, and software I've never used before. It would have been SO easy in my own computer but trying to learning something new under pressure when nothing was like I was used to was very difficult. The best I could come up with was this...

Which was very blurry, unlike the original. Getting this print involved scanning, copying to flash drive, moving to my lap top, opening it in Photoshop and discovering that it was a teeny tiny size, but when I enlarged it to this size (still too small for the photo board), it was quite blurry. By now I had been working at it for half an hour. At this point I told them they were going to have to use it, blurry or not. That was when Olivia told me that Joe's printer was also a copy machine and in seconds, she had copied it onto glossy paper and it looked just fine, and I felt like an idiot for not having known about the printer and suggesting it myself.

At 4:30 or so, we moved our part of the party over to Tom's, where Ned and Marta were rehearsing their music for the Mass tomorrow.

Jeri and Phil, who had come in on the red eye and then rented a car and drove up from Los Angeles, were exhausted and taking a quick nap before joining the rest of us.

I picked up the book I'd taken to Kinkos and distributed all the copies. Ernie retired to the living room to read the interview and get some material for his eulogy tomorrow.

Laurel was out in the back yard picking blood oranges off their tree to make blood orange margaritas.

Bri was just being her own cute self.

We had a great dinner during which time Lucille and I kept Bri entertained for half an hour (and I was pleased to hear Lucille singing Eency Weency Spider...always knew there was something about Lucille I liked). We even got Bri to eat part of her dinner.

After dinner, Aunt Jeri read Bri a story or ten...

...while Ned was rehearsing for the big moment to come later.

The evening ended with everybody jammed into Bri's bedroom trying to sing for Ned's video. We laughed a lot. It was a good way to end the day. Tomorrow will be a bit more solemn, I think! 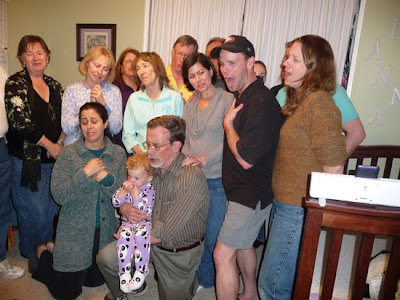