Around 10 his sister called back with the sad news that their mother died before the ambulance got to the convalescent hospital to pick her up.

It's hard to know how to feel about the death a 97 year old woman who could no longer see, could no longer walk, and who lived her life in a bed, always uncomfortable, whether it was being too cold, or being in pain. It's a great loss, but it's also a relief.

After you get the news, the first feeling is the shock. She's actually dead. There have been so many near misses over the past several years. It was inevitable that this call would come, but you're never ready.

The second feeling is frustration that it's too late to call the kids. It was after midnight in Boston, nearly 11 p.m. here, and too late to call Ned, who gets up early for work. Walt's sister would take care of notifying Tom. She also called their brother, and then Walt called him, trying to coordinate when they were going to go to Santa Barbara.

But after that is done, what is there to do? I remember after Paul died. We went to the hospital and then came home and it felt like we should do something, but it was too early to plan a funeral, too late to call everybody, we couldn't sleep. We just sat here looking at each other.

I sent out a couple of notifications by e-mail, but didn't want to say too much until the kids had heard about their grandmother's death (though even at that Jeri and Tom got voice mail messages and Ned got a text...spreading the news in the modern age!). At times like this I need to write, so I'm writing tomorrow's journal entry. It seems like such a little thing, but it's all I can do right now.

Alice was an amazing woman. Raised by an Irish immigrant mother who was employed by the McLean family (he bought the Washington Post in 1905, she owned the Hope Diamond), and she grew up playing with the McLean children, riding on the family yacht while the McLeans entertained the likes of Teddy Roosevelt and Will Rogers. It wasn't until I interviewed her in the 80s that she revealed that information--it was just what normal life was like for her and she didn't think it was anything special. Her children had never heard that story before.

Walt was her oldest child. She met her husband (also Walter, though Walt is not a junior) when she moved to California to begin working for the Soil Conservation Service in Santa Paula. They moved to Berkeley, then to Portland, Oregon, and then moved with their now three children to Hawaii, where Walt lived until he was 15.

Walt's father died shortly after they returned to Berkeley in 1955 and Alice was left with three children to raise on her own. And she did it. I'm a bit fuzzy on her employment history, but I know she moved the family back to Maryland where the kids all went to school and all three graduated from the University of Maryland.

At the time I met her, she was working for the Department of Education (I believe). Walt took me to Washington Meet, His, Mother. Serious stuff. I made a great impression. I'm sure there was much more to the visit, but the only thing that I remember vividly was dropping an entire dozen eggs on the floor of the kitchen. They all broke. I was mortified; Alice was gracious, as she handed me materials with which to clean the mess up!

She moved to California after Walt and I were married, accepting a job in San Francisco as the first female to hold a director-level position with the Department of Education. This assignment found her traveling extensively throughout California, Hawaii and Guam providing funding to public schools charged with educating children of military families.

Eventually Norm and Alice Nan moved out here too. She lived in San Francisco until she moved to a retirement community in Walnut Creek, then to a three-tiered facility in Sacramento, then to Santa Barbara and she lived out her last year or two in a convalescent hospital following the hip fracture. She has not been able to walk since the broken hip.

She traveled the world and saw everything she wanted to see. I remember being so incredibly impressed when she and a traveling companion were on the second voyage of the Orient Express after it re-opened, and she traveled through parts of China that had never seen caucasians before. She washed out her undies in cold water in the hotels where they stayed. I remember being so impressed that she did this at age 72. Somehow now, at age 68 and preparing to make my own trip to China, it doesn't seem quite so extraordinary!

But she rode camels in Egypt, went through the Panama Canal, went around South America, traveled all over Europe, Ireland and the UK. She visited Australia, India, Africa, Russia and Japan. She told her children that they should not be prepared for an inheritance, as she intended to spend it all. We lived all of her trips vicariously and loved hearing about her travels. Alice Nan was sometimes able to travel with her. They were best friends to the end.

She had friends of all ages. Everybody liked Alice and enjoyed spending time with her. She wasn't a soft, huggy person but she was interested in everybody. I remember whenever she met a new grandchild how instead of immediately cuddling him or her, she would hold the baby at arm's length and try to figure out who in the family he or she looked like.

She always came to the kids' performances, when she was able to do so, from the time they were in grammar school up until Lawsuit shows and she was thrilled the night she got carded at a bar in Sacramento (the guy on the door was carding EVERYONE, even the 80 year olds!)

I don't know exactly when her eyesight began to fail, but for the last several years her eyesight has been quite limited, due to macular degeneration. I never could figure out what she could and could not see. I remember trying to show her a picture and printing it very large and very colorful and her saying she couldn't see it at all, but then a few minutes later watching her pick up a short piece of thread off of the kitchen table.

The last time Walt saw her, two weeks ago, she was in the activity room of the convalescent hospital and was batting a ball around with other residents, so she could see well enough to do that.

I'm so glad Walt had a good visit with her then. So often he would fly down to Santa Barbara and spend his whole visit watching her sleep. But this was one of his better visits. Jeri, too, when she was out here at Christmas was able to have a good visit with Alice (see Video). It's like a good bye gift to all of us.

I am glad that she is out of pain, I hope Paul and David were there to greet her when she crossed over and I hope that she once again can see the wonders of whatever is around her.

She was a remarkable woman and she will be missed. 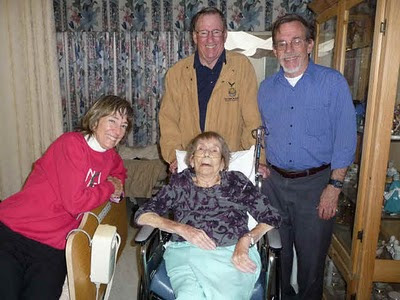 The way I feel is they had a good long life and I miss them and think about them daily.

What a great lady to leave such an exciting life and wonderful family behind. Of course, she'll live on in your memories of her, even as you miss her.

Hugs to you all.

My condolences to all the family. (One week without a computer and I am completely out of the loop.) I am glad you have such good memories of her, including your interview.

Yes, a good life: she did what had to be done and lived to enjoy her rewards.