It's something I never had the chance to know. Karen and I were not close growing up. We shared a room, but that's about it. When she got to be an adult and admitted she was a lesbian, it was during an age when there was something shameful about that and so she kept away from the family. It was only the last time I saw her when we had such a good time and I thought maybe we could finally be friends, as adults.

My mother's family was always very close. Even though her older sisters were adults and out of the house before my mother was born (and her oldest sister had a son older than my mother), there was just a real bond among all of them and their parents. Many of the cousins were part of that closeness, but because of my father's contempt for my mother's family, I was not in that inner circle. I listen to Peach and Kathy talking about their childhood memories and those were so far from mine. I didn't know many of my aunts, and none of my uncles, and only came to know them more closely after I had grown up.

So encountering the Sykes family was something I'd always wanted...that closeness. I always explained the closeness as because they were four against the world, after Walt's father died. And they succeeded. All of them.

Through the years, whenever we had a party, you could be certain that a good part of the time would be spent with Alice and her three kids standing in a circle laughing and talking. It wasn't a closed circle, but sometimes it felt that way.

As Alice got older her kids rallied around her. I cannot tell you how many times Walt has flown to Santa Barbara on a moment's notice in the past few years to be there to support his mother. Often he would spend several days just sitting with her, watching her sleep, but it was important that he be there.

Before she moved to Santa Barbara, and after she had to give up driving herself, Walt would include her in things we were doing. This meant he had to drive 40 minutes to get her, 40 minutes back to Davis, then we would do that thing we were going to do, whether it was a show or dinner or whatever, and then he would make the 80 minute round trip all over again to take her home. He never complained.

When she lived in Sacramento, she and Alice Nan, who also lived there at the time, spent a lot of time together. It's interesting that in my entry yesterday I mentioned that Alice Nan was her best friend...and then when I saw the obituary they had written, it also says that Alice Nan was her best friend. It was so true. They shopped together, had lunch together, went places together. They even bought a condo together. Then Alice Nan was transferred to Santa Barbara. A few years later, Alice moved down there as well and Alice Nan went to visit her most days a week. She always saw the best in her mother, always saw signs of good days, of alert days, of growing strength. She brought things to cheer up her room, made her take part in activities, frequently ate dinner with her in the dining room. 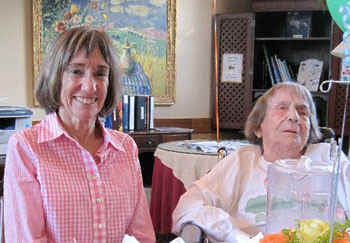 Every time she went into hospital, Alice Nan was her champion, the one who took on the nursing staff and made sure that her mother had the treatment she needed. (She was so diligent in making certain her mother was treated right that she got under the skin of one of the hospitals, whose staff ultimately said they would only take Alice as a patient if the family promised to stay away.)

As Alice's world got smaller, Alice Nan was there more often, and several nights a week would be there when she was getting ready to go to sleep. The two of them would say prayers together and it would help Alice calm down and be ready to sleep.

Alice Nan was so fortunate on Alice's last day. The convalescent hospital had been on lock-down for two days because of an infection that was spreading. Another hospital was on lock-down too. They were trying to prevent the infection from getting to all the patients. Alice Nan went to leave some clean clothes at the front desk for her (she took her laundry home to wash for her each week) but the attendant at the desk told her she could go back and see her mother. She sat with her and said prayers, like they always did. When the nurse saw her she told her she would have to leave. It was shortly after that when she received the call about her mother's condition, and then the later call about her death.

There is no need for any of her children to feel any guilt about how they treated their mother. I can't think of anything more that they could have done for her, and they all did it with love and without complaint, even when it involved dropping everything and traveling the length of the state to be with her.

The closeness extended out to their cousins, Ernie and Gerry, each of whom lived with Alice for a time when they were growing up. Gerry now lives in Long Beach, south of Santa Barbara and will be there for the funeral on Monday. Ernie and his family are flying out from Washington, DC to be there for the Mass as well.

The thing that I have said here, time and time again, is that it gives me the greatest pleasure to see that Tom, Ned and Jeri have the same closeness that Walt, Norm and Alice Nan have.

When I watch all of them is when I miss my sister, and I wonder if we really could have finally developed a close relationship, if she had lived.

It makes me feel sad when I hear of families who are estranged and who haven't spoken to each other in years. There is something special about "family." They are the people who know your whole history, the people who will nod knowingly when you talk about the time some uncle did something crazy, or when parents fought, or that silly recipe that your father made that turned out to be inedible. It sounds like a little thing, but the special memories in our lives are made up of "little things" and it's lonely when there is nobody who remembers them with you.

I had a taste of that several years ago. Peach and I hadn't seen each other in literally decades, but she and Bob came to dinner. We spent the evening laughing about silly family things and it was an amazing feeling. She was the only one who came close to knowing the whole of me in a way that nobody other than family could.

I envy what Walt, Norm and Alice Nan have and realize what a wonderful thing Alice did to nurture it. 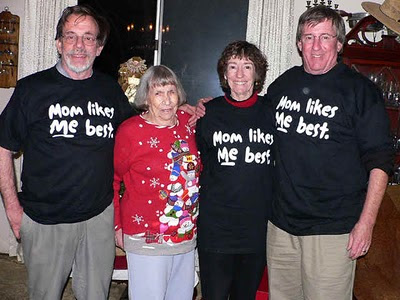