A Tribute to Brendan 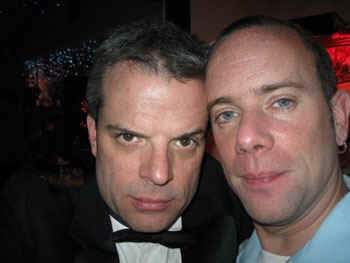 This was actually put together by "Sarge" Clanton but I wanted to repost it here as a tribute to Ned's friend Brendan, who died unexpectedly yesterday. Brendan wrote wonderful Facebook posts as Baddy Bailey, and I will sorely miss his comments, which I received very often. Here is the "real" Brendan:

Either Narnia has really gone downhill or I'm just sitting in some guy's closet.

The dude next to me at Starbucks keeps trying to hide his iPad screen from me. Like I care that his password is bieberfever#10.

Sometimes I look at dogs wearing sweaters and think, "Man... you sold out."

My roommates can place a single dish in an empty dishwasher and suddenly it's full. I think they're witches.

This all-you-can-eat Sushi Delight buffet is a rip-off. There are so many things I can eat that aren't here. For instance: crayons.

My low flow shower upstairs is broken. I think.

Oh my. I just got cougar'ed. Apparently, she's very wealthy and didn't blink when I told her I'm a homo. I politely declined ... because I don't want to move to Orlando, and I have no idea where to buy new tennis balls for her walker.

Arizona is like that crazy boyfriend who always claims he "hates drama" but seriously ... drama magnet.

It's not pirating if there are no parrots involved.

I just found a random piece of bacon on the bar. I'm not asking any questions.

It's amazing what you can accomplish when you do things out of spite.

Why can't they make a jetpack that doesn't make my back sweat? WHY??!!

If your name is Robert, I assume your parents decided you weren't cool enough to be named Robot.

I'm not the newborn King of the Jews, but I did stay at a Holiday Inn Express last night

"It's a Wonderful Life" does sound better than "You Matter So Little I Am Assigning the Stupidest Angel to Your Case, Love, God in Heaven."

I always lose respect for someone when they post a funny picture I saw months earlier. Also: I don't understand respect.

I need to get all my ducks in a row. For the big dance number.

I am so disappointed. I always thought that Alcoholics Annonymous was a place I could go to drink in private.

Conversations with 20-somethings. So angsty yet so reminiscent.

How many times do you pass your coworker in the hall before you switch from saying "hi" to breakdance fighting?

I feel bad. This lame Venuzuelan guy, trying to impress his girlfriend, told me his name was something like Emanualacoteziagonzal. So I told him I was Welsh and my name was Wwuhrrikhiafhrador. "DorDor' for short.

I just got accosted by the neighbor Nazis. Again. "HI THERE! We noticed that you haven't put out your garbage or recyclables for the past two weeks. Have you been on vacation?"

"No, I was in prison for assault."

thought a ninja was swinging a sword repeatedly behind me and then I remembered I was wearing corduroy. Pants, that is.

I bought a new shower head and the pulse setting hurts my nads and I have got to stop reading aloud as I type.

Show me a person who doesn't walk on the escalator and I'll show you a person who will transition poorly into the zombie apocalypse.

I'd like to develop human cloning, but what can I do? I'm only one man.

My advice: Smile. Even if you don't feel like it, smile anyway. It makes people wonder what you've been up to. There are so many grim faces on the street, on the bus, at work, whatever. If you give someone a smile they can't help but smile back. And it's awesome, if even for only a second.

Tried on hats and caps and the saleslady said my head was too big and I got mad and then the tectonic plates shifted and lava poured out of my ear. And then she made me clean it up. I'll never go there again.

Read a news article today called "10 Uses For Your Body After You Die". The article was pretty stupid -- there weren't any good recipes in the list.

So, so sorry, Bev. You've had to deal with a lot of death lately.