Well, THAT was disappointing

The Berklee concert was visually stunning, but the stream kept stopping and starting and you could never get a sense of the actual numbers, which was too bad because it looked great.  I'm hoping it will be possible to see it later.  I can't remember if they replay the concerts.

However, I WAS able to get a print screen of Jeri's hand...I think that's a new baton.

The performers were obviously very talented and had worked hard.  I just hope I can see it...eventually.

This is how it looked much of the time.

I heard from Walt's sister, who also watched and said they had good picture and good stream.  Walt couldn't even get a picture on his computer (and my speakers don't work, so I have to listen with earphones and could not let him listen!)  When they introduced Jeri at the conclusion of her section, my screen was black.  Alice Nan said it was clear on her screen.

While waiting for the concert to start, I was putting together a package for a SwapBot swap.  It involved checking a few boxes I had not looked in since I got the office organized.  Also finding a 5x7 envelope to send things in.

This is what it led to: 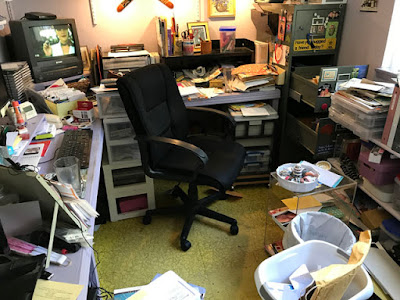 The envelopes were in the bottom drawer of my file cabinet, a drawer which is essentially inaccessible because of a small acrylic bookcase sitting in front of it.  But I also have a drawer of files that I haven't looked at in years, so I decided to switch the drawers, which was a major project.

I should have just tossed the files, but occasionally you find gems, so it takes actually looking through the files carefully.  I found, for example, the first letter I ever received from the woman who kind of runs the discussion group I'm in.  It was written in 2012 and it's surprising how little her messages have changed over the years.  Still it gave background I'd forgotten and it was fun to read it again.

I also found files for the newsletters I have written in my life.  It seems I have written a newsletter for every organization I ever joined and many of the offices in which I worked.  Newsletters I'd forgotten, like the family newsletter I put out each week so each person in the family knew what was going on and I didn't risk forgetting to tell someone or tell one person something more than once ("don't tell Paul Sykes things he already knows").  There was even a precursor of this newsletter called the Saturday Evening Post that I don't remember at all, but from the look of it was created on my old Apple IIc computer, the first computer I ever owned (which had no internal memory).

There were all the Piñata Papers, which I sent out monthly to everyone in the Piñata group.  I'd completely forgotten I used to write a newsletter for customers of The Typing Company when I worked there and one for the employees of Women's Health Associates, that some still remember fondly.  And there was the Fat Fax, a newsletter for a group of us who all wanted to lose weight but didn't want to go to meetings (I subtitled it "the newsletter for closet thin people").  I can't even remember now who was in that group, but I think there were 5 of us, some of whom are dead now. It was supposed to rally us all around as support for each other.  As I recall, it was short-lived and ineffectual.

I don't have copies of the Cock and Bull, the newsletter I started with Gilbert for the Lamplighters, but I am proud of that newsletter because it continues today, some 30+ years later, though I have not been involved with it in decades.

I should throw all of that away, but maybe someday after I'm dead and gone, someone will find it interesting to know how much writing I did in my life.
Posted by Bev Sykes at 7:26 AM

Email ThisBlogThis!Share to TwitterShare to FacebookShare to Pinterest
Labels: berklee, my office, newsletters