I don't remember when I started watching MSNBC's Morning Joe.  I heard of it for years and had checked it out once or twice, but Joe Scarborough's far right wing views and his holier than thou delivery turned me off.

But during the election, after I really had seen all the reruns of Golden Girls and Frasier that I could handle and needed some other middle-of-the-night show to put on in the hope that it would put me to sleep, I turned on Morning Joe.  Scarborough didn't seem quite as obnoxious then, probably because he was feeling about the election the way I was.  I never watched the show much anyway -- I turned the sound down to very quiet, the talking heads droned on and on and in no time at all, I was asleep.  My nightly soporific.

[aside:  I was reading an old journal entry of mine from 2008 and discovered that even then, and probably before then, I was writing about waking up every night at 3 a.m.  I still do.]

I've been watching at the show for so long now that I feel like a regular.  I have come to like Mika Brzezinski and I had to laugh when I heard she and Scarborough were engaged.  I envision a home life similar to what it must be to live in the house of James Carville and Mary Matalin.

Since the 45th president ascended the throne of power in the White House, the news reports have been getting more and more...what's the word?... depressing? infuriating? frustrating?  And as the last two weeks have progressed, with each day bringing a new tweeted scandal, it has been impossible to turn down the sound and go to sleep.  So I'm essentially waking up at 3 a.m. and just staying awake until later in the morning.  I should do what my sister-in-law does and tape the show to be watched later, but I never seem to have the time to watch it later.

A White House staffer was quoted recently as saying "can't we have just ONE crisis-free day?"  That's kind of how I feel about Morning Joe.  It would be nice to turn it on at 3 a.m. tomorrow morning and find he is talking about less incendiary topics like missile launches from North Korea or rioting in Africa or something I don't mind sleeping through.

I did go over to Atria at 1 p.m. today and found someone just getting ready to take my mother to lunch, so I went with her and had a second lunch.  She always loves the flowers on the table, always checks to see if they are real (they are), and sees them for the first time several times throughout lunch.

We ordered cheeseburgers which were so thick my mother didn't know how she was going to wrap her mouth around hers.

I told Walt when I got home that it is getting more and more difficult to find something to talk with her about.  She asks endlessly what my plans are either for the rest of the day or for the rest of my life.  I try to find something that I'm doing that she can follow, but she seems to be having difficulty following even simple sentences and often just waves me off with "I can't understand a thing you're saying."

I used to try to make her laugh and tried that today.  She was commenting on the brown age spots on her arm again and how they made her look old and that they were ugly and she wanted to just chop her arm off.  About then, her nose began to itch, as it seems to do constantly, and she took her napkin and rubbed her nose with it.  I told her that if she chopped her arm off she would not be able to scratch her nose when it itched.  That was entirely too complicated for her to follow.  A couple of months ago we would have had a nice giggle over that.

We did talk a little about politics.  She asked me how the world was doing and I said "terrible" and then gave her a very brief outline of what is going on (she has never heard of Donald Trump, though she read the newspaper every day).  She kept demanding to know what I was going to do to fix things.

But we had a nice lunch and I told Piyush, the server from Nepal, who is my favorite (she always called the women "mama" because she can't remember everyone's name) that she would be moving to memory care next week and she was very sad, because she would probably not see her again.  I was so happy to take a picture of the two of them.  I've printed off a copy and will get it to Piyush when I am at Atria tomorrow or the next day. 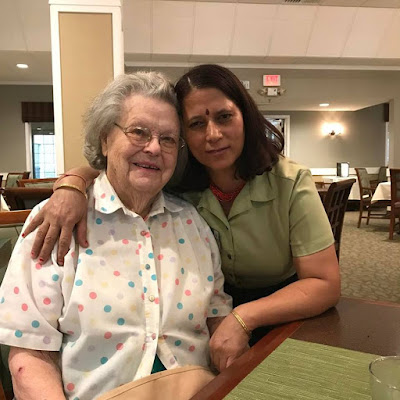 I came home and took a 2 hour nap and when I woke up, I discovered that there was yet another chapter to the sharing secrets with the Russians story.  Please can't we have one non-chaotic day?  I can't even imagine what it must be to work at the White House right now!
Posted by Bev Sykes at 5:35 AM

Email ThisBlogThis!Share to TwitterShare to FacebookShare to Pinterest
Labels: Morning Joe, My Mother