A rose is a rose

Today Ned and I took my mother to the McKinley Park rose garden in Sacramento.  Ned has been wanting to do this for months but had to wait for the roses to bloom...and then when they reached their peak, he was on the road, driving from Houston to Sacramento.  So the roses are slightly past peak, but still an amazing, dazzling display of color.

We almost didn't make it.  When I went to Atria she was asleep and didn't think she could stand up.  I became Ned or Jeri and jollied her to sitting, then gave her coffee, which woke her up a bit.  She got emotional when she asked "where's Mom?" and I had to tell her that her mother had been dead for 60 years.  She was sad that she didn't even know that.

But eventually I got her out into the car, not having a clue where she was or where she was going, but by the time we got to the park near Ned's house, she was a bit more with it.  Ned, bless him, met the car, got us out right across the street from the entrance to the park and then took the car and parked it, so we would not have to walk far.

Ned was such a good guy.  He had packed a lunch for us and thought of everything.  He bought white balloon bread, which he remembered my mother always made her sandwiches on when she made lunch for him as a kid.  He went and found olives because my mother had always said "it's not a party without olives."

He made a delicious fruit salad and he packed beverages -- wine for himself and his grandmother and water for me.

We were at a bench in the shade, just outside of the garden itself and my mother kept exclaiming over and over about how beautiful the flowers (and trees!) were.

I left the two of them sitting there and I went off to wander through the garden and take some photos.

Eventually, my mother was getting cold so they joined me in the garden and we wandered around looking at all the roses.  My mother especially seemed to like the huge bushes of white roses.  In fact, whenever we were talking about anything, she would interrupt to say "aren't those white roses beautiful?"

It was finally time to leave -- I needed to get the car home for Walt, who was going to San Francisco that night.  Ned went and got the car for us and parked it in "movie star parking" (directly opposite the entrance to the garden--Thank you, Gilbert) and we said our goodbyes.

Instead of getting on the freeway, knowing how much my mother loves trees and knowing that Sacramento is officially a "Tree City," I drove through town and, not surprisingly, she just loved looking at all the trees.

I dropped her off at Atria and while she didn't know where she was going, I knew she would be able to find her apartment (I won't be able to do that after she moves next week) and I came home to nap for a couple of hours, since I'd had so little sleep the night before.

While still vague and demented, she was so much better at the end of our adventure than she was when she woke up, that I felt good about the trip and am encouraged to think about the possibility of her having more social interaction with folks in the memory care unit, which can only be good for her.

Thanks, Ned, for following through on this.  It was a great day and you made your grandmother very happy! (Me too.) 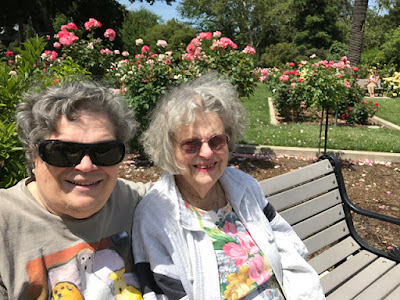 Email ThisBlogThis!Share to TwitterShare to FacebookShare to Pinterest
Labels: My Mother, rose garden