The best part of yesterday was when my mother, sitting in her chair, looking out the window of her new apartment, found a tree that was particularly beautiful.  I knew it was going to be OK.

We had  long day and I'm sure my mother is waking up this morning not having a clue where she is, but I hope at least she can find the bathroom.

It started at 11, when Jeri went to Atria to take her grandmother out for a couple of hours.  When they were leaving she texted me an all clear message and the moving crew gathered in the apartment.  It was Walt, Ned and my mother's stepson Ed, who worked tirelessly for the next two hours to get things set up.

I took pictures of things like her dresser and the table she sits next to so I could recreate it when we got to the new apartment.

I'm wondering if there are going to be problems with her neighbor, the woman in the apartment on the other side of the "pod" my mother is living in.  She seems to have taken over.

We met Marge and the difficulty with her is that her memory is worse than my mother's.  We had a conversation with her and I stll don't know what she was talking about.  She did come in and look at the apartment and ask why Walt and I didn't get into bed, because that was all there was to do there.  I'm not sure she understood that we were not going to live there.

Things came together quickly and soon we had the apartment looking set up and ready for Nick, from the maintenance staff, to come in, and hang pictures.

Nick was still working on getting her TV hung on the wall when Jeri and her grandmother returned, so things were a lot more chaotic than I had hoped, but she didn't freak out.

Ned went to the dining room and got cups of ice cream and Jeri cut up strawberries she had purchased while they were out and we all took a break.

We took her on a little tour, showing her the garden which she seemed to really like.

When the TV was connected, Walt found a music channel of music that my mother would know and Jeri got her singing to Nat King Cole.

The connection between music and the brain always amazes me.  She can't remember my name sometime, but she can remember all the lyrics of songs she sang back in the 40s and 50s.  Jeri had created a playlist for the car and she said that my mother sang all the lyrics of all the songs even songs Jeri didn't know.

Eventually it was time to leave.  I was surprised there was no staff person there to make sure she knew what was going on, but both Jeri and I stopped to let people know that we were leaving.
We came home, Jeri and Walt enjyed a "dark and stormy" out in the carport and chatted for awhile.  I cooked dinner and we toasted our good work for the day. 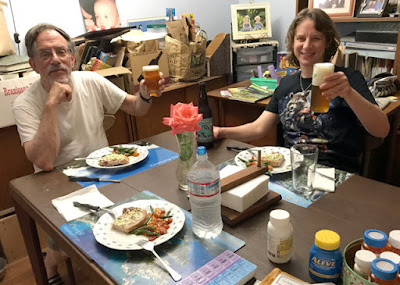 Today we have to face the mess that we left behind and try to sort out what is going where.  Someone comes today to take all the clothes we did not move and on Wednesday, Habitat for Humanity takes all rest of the furniture.

But I slept peacefully last night for the first time in a couple of weeks.
Posted by Bev Sykes at 6:51 AM

Email ThisBlogThis!Share to TwitterShare to FacebookShare to Pinterest
Labels: memory care, My Mother

I'm so glad all survived the day. Hooray for you all! You know your mom will be fine (as fine as she can be). You just need to take care of YOU!