There is one characteristic of my mother's that I hate and that is only getting worse as she gets older.  She is a very vain person.  She always has been.  She is from a family of 10, 7 girls, and to be honest, none of them would compete for Miss America.  But for a long time she was the only one who was "citified," who moved from the country to the city, and who, eventually, was taken under the wing of my grandmother whose friends were rich ladies who dressed well and knew how to set a proper table and all those things that go with a certain level of society.  We weren't in that level of society, but my grandmother spent her life trying to live up to it.

I don't remember ever waking up in the morning and seeing my mother without full makeup.  The first thing she did every day was to get up, go into the bathroom, and put her make up on.  She might be cooking breakfast in her bathrobe, but her makeup was on.  I don't think she learned that on the ranch where she grew up!

For most of her life, she went to the beauty parlor every week so there was rarely a hair out of place.  Surprisingly she didn't have professional manicures that I remember, but she was always doing her own nails.

Now, at 97, she doesn't have the same routine.  She can walk about with bed hair, looking like the Wicked Witch of the West and it doesn't bother her, but she is obsessed with her hands. 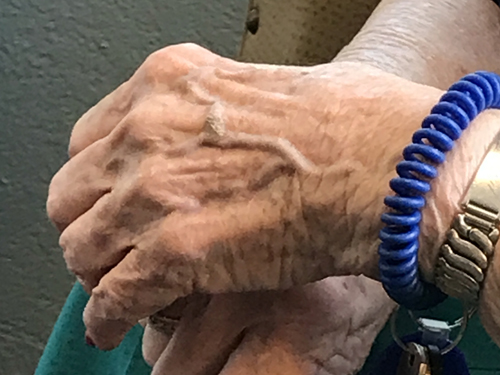 When I left Atria today, I realized I had spent one hour talking (or listening) about her hands.  She's mad at them, you see.  She hates how they look, hates the ropy look of her veins and especially the brown spots.  She picks at them and hits her hands and calls them stupid.

Showing her that my hands look similar to that doesn't help.

After she talks to and scolds her hands for looking so old, then she examines her arms and slaps at the brown spots on her arms.  Stupid, stupid, stupid! she tells her arms.  And then it is back to her hands again.

She will change it up a bit to tell me how ugly her nails are. 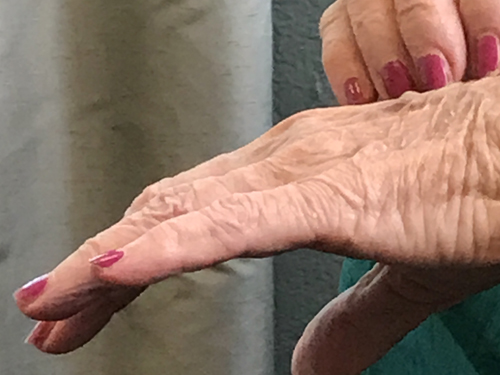 My cousin gave her a manicure recently but it looks like she has filed the nails down so they are not the way they looked when she had the manicure.  They aren't chipped or cracked, she just doesn't like the way they look.

Then she goes back to examining her hands and how she hates them.  This is a conversation we have almost every time I visit her, but today it was a conversation that went on for literally an hour.

She finally told me that she just realized her shoes had holes in them and I knew it was time to go home before I went stark raving mad. 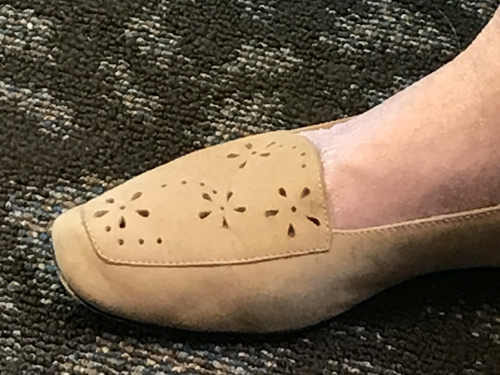 The one brief break from the hour-long diatribe about her ugly hands was when she asked me where the little girl was.  "What little girl?" I asked her and she said "You know.  The cute little girl who is always here."  Not sure where THAT came from!
Posted by Bev Sykes at 1:33 AM