Not a Normal Family

Over dinner at our Mexican daughter Marie's restaurant in Elk Grove tonight, we reminisced about the year she lived with us while she was finishing high school and some of the weird things that went on. "You are not a normal family," she laughed.  I liked that!

It had been a very full day.  My plan had been to leave the house at 10:30 so we would have lots of time for wine tasting in the Napa Valley, but it was actually 12:30 before we left Davis.  We drove to Napa...

...where we first stopped at the V. Sattui Winery, which is owned, coincidentally, by the family of the woman my father dated before he married my mother back in 1940.  This is a beautiful old estate winery, with lots of picturesque stuff and a taste of 5 wines costs $15, which was waaay more than we wanted to pay (I am remembering, fondly, the days when all these wineries offered free tastes).  But we did wander around and snap pictures of the old estate.

The tasting room/deli was a zoo.

We left quickly and decide to skip the "free" wineries close by and go to the Vincent Arroyo Winery at the far end of the valley, where we knew there was free tasting and a dog to play with.  We had some problem getting there because a bridge was out and we had to find a way around the washout, but Walt finally did and we arrived at the winery.

Vincent Arroyo is not one of your big brick edifices with caves in which to age wine, but it is free for tasting, the wine is good (we bought 4 bottles of wine and a bottle of port, along with some thick balsamic vinegar), the tour was so comprehensive that I felt if we had $800,000/acre to buy land we could probably start our own winery.  And best of all there was Rosie, the winery dog, passionate about having people throw a tennis ball for her.

(We actually discovered this winery through Char many years ago.  Vincent Arroyo is a friend of a friend of ours from UC Berkeley)

The big wineries charge you big bucks (some as much as $30) to taste a few wines.  The guy who pours will tell you a bit about the wine and pour you a splash in your glass and then move on to the next wine.

There were eight wines and a bottle of Port for us to taste at Vincent Arroyo and the "tastes" were generous.  They have two brands which are their own.  One is named "Nameless" and the other is named "Bodega."  Nameless was a cat and Bodega was their chocolate lab  We actually liked the Bodega and bought two bottles.  Our guide told us it's his favorite wine with steak, so steak is on the menu later this week.

He also gave us a winery tour, which, given that it is a tiny winery, didn't take long, but describing the process of harvesting, crushing, and fermenting the grapes and how they store it and age it and how they make their blends took a lot of time (while Rosie kept bringing us a ball to throw).

My knees were giving out, and I was also the designated driver, so I gave up tasting the rest of the wines and went outside to sit in rocking chairs made from old wine barrels.  When the tour group went out to look at the vineyard and learn about pruning the vines, the tour guide asked first if I wanted him to bring me more wine.  You won't find that at V. Sattui, or any other big winery,

I don't know how long we were there, but long enough to realize that we had no time for any other winery (after the tour here we didn't need one) and that we now had to rush back to Davis because we were meeting Ned and Marta at Marie's restaurant at 7:00.

Dinner was, as always, wonderful and I loved showing off the decor to Caroline.  There is a lot of a Day of the Dead theme.

After a leisurely dinner with more wine (beer for Caroline), we finally had to leave.  Marta had to get up for work in the morning and Caroline has to get up for her class.

It was a white knuckle drive home for this designated driver as it was raining and I hate that part of the highway under the best of circumstances, so the combination of rain and dark made it just that much worse.  It was a relief to arrive home safely. But what a fun day this "not normal" family had today! 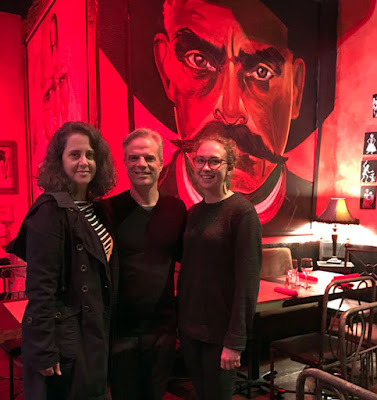