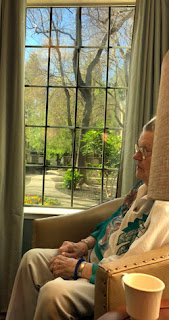 I found my mother sitting in her favorite chair, just outside the dining room, a cup of coffee next to her.  Since I didn't have laundry to pick up or drop off, I just sat there and visited with her there, in the lobby.

Every time someone passed, she would comment that everyone was "going, going, going somewhere" and, since it was a beautiful day, I asked if she would like to go somewhere and said I would be happy to take her for a drive.

Her brain processes more slowly now and you can't point to moving things for her.  There was a squirrel and by the time she had processed the world "squirrel" and that it was outside and that it was climbing up that tree, the squirrel was long gone and she missed it entirely.  Likewise a cute little bird hopping around the patio right outside her window.

I told her about Caroline and whenever I mentioned something about her, I had to explain again who she was, and when she couldn't understand me at all, she would look past my head at the window in the dining room, on the opposite side of the building, interrupt me, and say "aren't those trees beautiful?"

Over and over again, she raved about how they were the most beautiful trees she had seen.  I'd like to live inside her head and see the beauty she sees here.

I did have to laugh, though.  She is forever complaining about "all that junk" in her apartment, giving it a disgusted wave of her hand, so upset that things aren't absolutely perfect.  But while she sat in the chair today, looking at the trees coming into leaf and the trees that still have bare branches and she gave the same disgusted wave of her hand and said something like "but look at all that....junk."

She's also having more problems with word finding.  After telling me how beautiful the leaves on the trees were, the last time she pointed them out to me, she couldn't remember the word "leaf" or "tree" and just said "all that....stuff....is so beautiful."

But she's happy.  She's healthy.  And the only thing she complains about (other than the messes she sees) are the brown spots on her hands because people will think she's old.  I can't really be unhappy about that.  People marvel at how young she looks and she certainly looks younger than most 80 year olds in the building.

Caroline seems to be settling into a routine.  She had come here to take a course in neurology, but that didn't work out, so she is in cardiology and came home the first day to announce she had listened to a hawk's heart that day.  She also fell in love with a puppy (who had to go home at the end of the day).
It rained yesterday morning, so Walt took her up to the hospital and brought her bike on our long-unused bike rack, since it was predicted to clear up by noon; she got home just fine.  It looked like it was going to rain this morning too, but it cleared up before she had to leave.

I've bought food she can eat and pack for lunches.

So it's all going well.  This weekend she is not on call, so we will go to Napa one day and somewhere else the other day.  We also have a show Saturday night and will probably go to our Mexican daughter's restaurant for dinner on Sunday night, if Ned is free.

Even Polly is coming around.  She still barks when Caroline stands up, but I think part of that is because she barks when anyone (even Walt and I) stand up because she logically assumes that the only reason any human being would get up from a sitting position is to get food for her.


The time already seems to be passing quickly.
Posted by Bev Sykes at 5:54 AM

Email ThisBlogThis!Share to TwitterShare to FacebookShare to Pinterest
Labels: caroline, My Mother