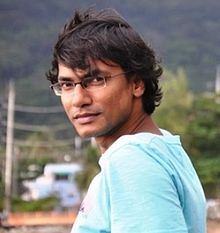 I spent a good portion of the morning reading about Xulhaz Mannan, a 39 year old man in Bangladesh, who was hacked to death with machetes wielded by a gang of six Islamic fundamentalists, in his apartment in Dhaka, in front of his 80 year old mother.


I first heard of Xulhaz Mannan a couple of days ago when Steve posted the link to a song for which he had written the music. In Bangladesh several academics and bloggers have been brutally murdered and now, according to reports, they are trying to "erase his name."  By telling his story, perhaps I can do my bit to keep his name alive.

Mannan, a graduate of the University of Dhaka, worked at the US Embassy in Bangladesh and regularly posted photos of diplomatic events on his Facebook page. (Ironically, in December his cover page contained a tribute to "the martyrs.")

In recent months, activists and thought leaders have been increasingly targeted in Bangladesh. On Saturday, according to the Independent, a professor was hacked to death by the Islamic State group, also known as ISIS, and on April 6, suspected extremists killed an atheist, secular activist in similar fashion.
World.Mic

Mannan worked for both Roopbaan and the Bangladesh outpost of USAid, the United States' government's humanitarian and development agency.  Roopbaan was the country's only LGBT magazine, launched in 2014 to promote greater acceptance of LGBT communities in Bangladesh.  Homosexual relations are criminalized in Bangladesh and many LGBT activists have been forced into exile.  Mannan had worked in the human rights sector specially for the LGBT community in Bangladesh. He successfully arranged a "rainbow rally" in Dhaka on 14 April 2015, however the rally was canceled in 2016 on police instruction, following death threats.

The current US Ambassador to the country issued a statement saying “We abhor this senseless act of violence and urge the government of Bangladesh in the strongest terms to apprehend the criminals behind these murders.”

Champa Patel, Amnesty International’s south Asia director, said: “There have been four deplorable killings so far this month alone. It is shocking that no one has been held to account for these horrific attacks and that almost no protection has been given to threatened members of civil society.

USAID published a statement calling Mannan "a courageous advocate for human rights."  John Kerry has urged the prime minister to arrest the killers.

Mannan's mother is a retired education ministry officer and elder brother was the vice president of Dhaka stock exchange. His elder sister is a pharmacist, living in the US. His father, who died several years ago was actively involved with the Bangladeshi independence movement in 1971.  His cousin was former Bangladeshi Foreign Minister, Dr. Dipul Moni.

Perhaps the worst thing about this horrific crime is that protesters are cheering for the murderers.
This is the song that Steve wrote.  Let's keep his name alive.

We in this country are so incredibly far removed from what it is like for some people in the world.  Maybe we don't want to know.  Maybe it's ugly and unpleasant and we'd rather find out who won Dancing with the Stars.  But that ugliness exists.

Today I read the story of a little girl in...I can't remember what country now, unfortunately.  Philippines?  Maybe.  Anyway, someone from Compassion went to visit her home and discovered that she lived with her grandmother under a house.  The visitor asked what they did when the rainy season came and the grandmother said that during the rainy season, they lived with water up to their waste all the time.

I is so important that we share things like this, to humanize them, to bring stories of extreme poverty and extreme violence out into the open.
Writing about the massacre of Xulhaz Mannan in a little blog in a little town in California is not going to have any effect on violence in Bangladesh, but maybe if enough people like me keep his name alive, it will be more difficult to wipe the whole thing off the books an his memory will live on.