What's that old saying?  "The hurriedier I go, the behinder I get" ?  I was so proud of the albeit small progress I had made on The Cleanup until Ned came today.  Ned, bless his heart, worked like a demon all afternoon and he moved everything else except the things I use every day (my desk, computer, printer and the accoutrements that are piled on top of them) to the living room.

Ned kept the recliner (Lizzie's bed), the couch (my bed) and the straight
backed chair (Polly's bed) free.
The only 3 pieces of furniture without something piled on it!

These pictures don't begin to do justice to how stuffed with stuff it all is.  There are two obvious questions to ask:  how did I fit all of this in my office to begin with, and how am I going to get it all back in again when it's time!

Ned has removed and dusted every book and scrapbook -- definitely no mean feat! -- and all I need to do is sort through it all.  All I need to do.

I was so proud of the progress I'd made this past week and the bit of plan I was beginning to imagine for how to arrange the office when it gets painted (yes, paint is included in the plans) and now it all looks overwhelming again.

When this project is finished, I'm going to have to send Ned on a cruise or something to thank him!
In the late afternoon, I went over to my mother's, mainly to make sure she didn't accidentally go to the dining room for dinner, when we planned to take her out for Chinese food.  Also to prepare her for going out.

She was in good spirits, unable to remember anything, of course (we went over at least 20 times or more what we were going to do and who was going to be there).  But despite the endless repeating, we had a good 2 hour visit.  At one point, when frustrated about something she complained that it's hard to be old and when I told her about a 102 year old man I heard recently who said he keeps from feeling old by staying active, she said "I don't complain about feeling old, do I?"  Then said she doesn't feel old.  And then a couple of minutes later she was complaining about how hard it was to be old again

But I had to laugh as she looked around her neat, orderly apartment and sighed that she just had to do something about all this stuff.  "You don't have clutter like this, do you?"  I just laughed.

Ned and Walt didn't make it over to Atria, as was the original plan so we met them at the restaurant, Ding How, a very small Chinese restaurant about 4 blocks from Atria.  She probably ate more tonight than I have seen her eat at Atria in three years.  She had crab wontons, chow mein, black mushrooms and broccoli, honey walnut shrimp, snow peas with water chestnuts, and pork fried rice.  She went back for seconds...and, amazingly, thirds on the rice, and seconds on the won ton.  I couldn't believe this was the woman who only wants a tiny bowl of fruit salad for lunch and when served vegetable soup never eats the vegetables because it's just too much for her to handle. 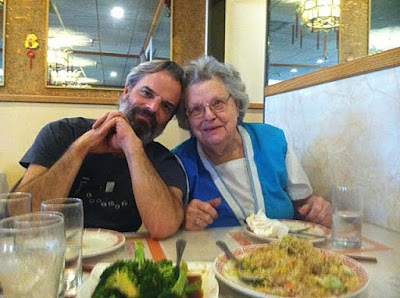 When we drove her back to Atria, this time she didn't seem disoriented and unsure where to go when she entered the building.  That varies from time to time -- last time she seemed totally lost -- but today she just strode in confidently, turned and waved, and disappeared as she headed off to her apartment.
Posted by Bev Sykes at 12:00 AM