There was no wine today.  Maybe a bit of whine, but definitely no wine.
Around 11, I called my mother to let her know Niecie would be coming for lunch and to give her a pedicure, and NOT to go to the dining room until she got there (knowing full well she would forget most of what I said, but she might remember that there was some reason why she shouldn't go to the dining room).  There was no answer.

I figured she had either gone to lunch early, or she had gone to sit in what she now calls "her seat," which is a chair outside the dining room where she can watch the trees in the garden.

I tried calling Niecie to tell her where to look for her, if she was not in her apartment, but didn't reach her.

About 10 minutes later I had a call from Niece, who was in my mother's apartment, with my mother and she said, very tactfully "she's not remembering things too clearly today and she seems a little anxious.  She doesn't want me to give her a pedicure."  I asked her if she wanted me to talk with her and she said no.  She said she would call me later and we could get together.

I sat here for about 10 minutes, worrying about what was happening at Atria, knowing how she can get when her anxiety kicks in.  I decided I couldn't stay home and so left for Atria.

After the visit(s) were over and we went out to our cars together, Niecie told me that when she arrived, she woke her up, that she didn't know who Niecie was, she didn't remember having a daughter ("I have a daughter?").  She didn't remember being married ("did I have a husband?"), didn't remember any of her parents or siblings.  By the time I got there, Niecie had talked her into the pedicure and had some music (from Pandora) going on her iPhone and though my mother seemed angry at someone working on her feet, she at least was letting her (thank God because she definitely needed her toenails cut!)

The visit was more of the same...much more of the same.  She thought Niecie's sparkly fingernails were rings and no, she didn't want her nails painted like that because she already was wearing a ring.  I lost count of how many times she suddenly noticed her newly painted toe nails and asked who had done it.  Many, many times.

She asked who brought her the flowers that I had Jeri take to her back in March.  She asks me that many times every time I visit.  I think she has finally realized that they came from me...but she always asks.

We went to lunch and, as usual, she decided to have fruit salad and dessert.  As usual, I suggested she try the vegetable soup so she would have something more than a teeny tiny bowl of fruit.  This time she got petulant and said she didn't WANT vegetable soup but when the server came and she had already forgotten what she wanted to order, she told him she wanted fruit salad and vegetable soup...and then told me, which she never does, how good the soup was. 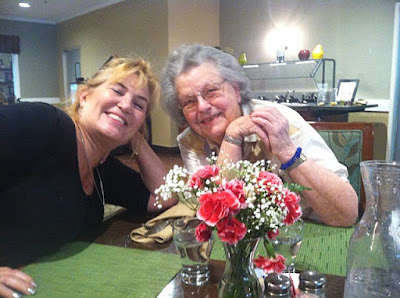 Back at the house, there was great surprise at her newly painted nails and she wondered who had done it.

Since Niecie and I had already visited and since we caught each other up on my other at our respective cars when we left Atria (and since it was getting late), we didn't go for wine, but each went home.

I left Atria relieved that someone in the Scott family finally has seen her at her worst, or near her worst, and understands that I am not exaggerating things when I write status updates about her on Facebook (which are rarely acknowledged).  I didn't feel quite so alone, but I missed Peach terribly.  And I also realized that anybody who might want to come and visit her (though in 3 years only Niecie has come) would decide not to make the hour+ long drive to come to Davis.

The thing that bothers me is that she seems to have forgotten her husband, Fred.  It never seems to faze her when I mention him and she used to tell me all the time that he's waiting for her and if she doesn't die soon he might get tired of waiting.  But she never says that any more.  But she has started talking about "her boyfriend," the 98 year old veterinarian who is deaf and getting to my mother's state of dementia as well.  I don't think she would think of having a "boyfriend" if she was still thinking about joining Fred in the foreseeable future.

I come home from these visits completely drained and just sit staring off into space.  I am realizing that her dementia is worsening quite a bit lately.  I don't know how much longer she can stay on independent living, though while I am monitoring her carefully, it's possible she can still make it a long time before I have to have people checking on her all the time, and taking her to meals, etc.

I miss my mother, dammit!!!!  And there is nothing I can do to get her back but I have to keep watching this person who looks and sounds like my mother turning into a person who is so different from the mother I have known.  But then she had to go through this with her mother so I guess this is just my time of life.

Pay attention, Kids....
If all goes well tomorrow, there will be no problem writing and posting an entry, but given that the computer will be moved, the modem and router disconnected and re-connected, I'm suffering great angst about the whole project, though I did choose a nice paint color, if we can find it;  abalone (one of the 3 colors Tom tells me he is painting his newly redecorated house) when Ned gets to the painting phase of this project.

However, on the off chance there is no entry...now you know why.
Posted by Bev Sykes at 12:57 AM