I think I've decided that Friday is my favorite day of the week.  It used to be Thursday, the day I work at Logos and that is now my second favorite day of the week.  But once I leave Logos, I know that I have six days before I "work" again.  Sometimes there are shows to review...often there are shows to review, but when I wake up on Friday morning, even if there is a show to review that night, I have nothing pressing to do until late afternoon.
It's a psychological thing.

Jeri spent the night here last night.  I conked out on her and Walt and was on my couch dead to the world before they finished chatting, turned out the lights and went upstairs to bed.  Phil had spent the night with friends he wanted to spend time with. 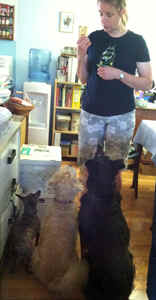 In the morning Jeri got up, called her grandmother at 9 and invited herself over for a visit.  She had things to do in the late morning so thought she could sandwich in a visit beforehand.  She's also been working on making friends with Polly and the best way is always through Polly's stomach...the other two got the benefits of Jeri's Polly campaign.

When she went to Atria, she took Sheila with her.   I've been thinking about taking Sheila to visit my mother for a long time but have never gotten around it.  I would be hesitant to take Lizzie, and would definitely not take Polly, but mellow Sheila is just perfect and now that she's been there I will have to take her again some time. Jeri says I should walk her over, but I probably won't, being too lazy to do it!

As for me, I spent a lot of time organizing Compassion things today.  I had a few letters from kids I hadn't answered yet, and had not posted to my Compassion blog, where I post all the letters and pictures from the kids.  I usually write letters to all the kids--you can write one e-mail letter and have it duplicated to all the kids, sometimes adding a personal note for the specific child I'm writing to, which makes it go more quickly.  I can pretty much do it in an hour or an hour and a half.  It has made writing to the kids so much less time-consuming.  Not that I have ever minded it, but writing individual letters takes more time than sending out 19 individually produced e-letters!

I don't print my letters to the kids on the blog (they are stored on my computer), but always print a letter when I get one from one of the children.   It's the easiest way for me to keep organized and remember who wrote when and what I said in response.

After I finished doing some Compassion stuff, and when Jeri was out of the house, I got caught up on some TV that I hadn't seen in the last 3 days. Jeri is not a TV watcher, so I try to keep it off when she is around.  She doesn't understand my need for "white noise" all the time and I know it would drive her nuts, so being a good hostess, I just let the DVR handle what I would normally be watching.  But that does mean a lot of catching up to be done when I get to have the TV back again.

The big concert is tomorrow night and someone from Lawsuit posted the above picture on Facebook.  A million years ago, before a Lawsuit concert, the Davis Enterprise posted this photo on the front page and Walt nearly fell off his bike on his way home from work when he passed by a newspaper machine.  This is exactly 12 people who performed with Lawsuit, when they were each in Kindergarten.  They weren't in kindergarten together, of course.  Jeri, with the braids, was in kindergarten a year before Ned, just below her, who was in kindergarten a year or two before Paul, bottom right.  I look at this picture and it makes me smile...and Marta, next to Ned, definitely has the best picture, though K.C. (with the bow tie) may be second--and he hasn't changed a bit since then!

Norm & Olivia, and Alice Nan are all coming up from Petaluma for the show and we are going out to dinner before hand.  It's just like the old days! (except now I make sure that I have a chair to sit in, since no chairs will be provided by the band!)

Email ThisBlogThis!Share to TwitterShare to FacebookShare to Pinterest
Labels: Compassion, Lawsuit, My Mother