Do You Have Any Grey Poupon?

Rejoice, mustard lovers...today is your day.

I mean it.  Really.  Today is National Mustard Day, celebrated in grand style every year in Middleton Wisconsin.  It is a fun-filled day for the whole family and has traditionally included FREE hot dogs as well as music, games, other entertainment, FREE mustard sampling, and more. The Mustard Museum has been the official sponsor of this event since 1991.

Middleton, Wisconsin, it seems, is the home of the Mustard Museum (another of those oddball museums I would like to drive across America to explore...sort of like the Jello Museum, but with a bit more "bite" to it!)

According to Barry Levenson, founder & curator of the National Mustard Museum, you can blame it all on the Boston Red Sox. In the wee hours of October 28, 1986, after his favorite baseball team had just lost the World Series, Barry was wandering an all-night supermarket looking for the meaning of life. As he passed the mustards, he heard a voice: If you collect us, they will come.


He did and they have. In 1992, Barry left his job as an Assistant Attorney General for the State of Wisconsin to open this most improbable museum, now one of Wisconsin’s most popular attractions. The Mustard Museum has been featured on The Oprah Winfrey Show, the popular game shows Jeopardy! and To Tell the Truth, as well as countless features on other national television and radio shows, and in major newspapers everywhere.


Did you read that?   The guy was Assistant Attorney General of the State of Wisconsin and he gave it all up to open a mustard museum!

The on-line store includes the opportunity to buy an astonishing array of mustards and even a periodic table of mustards on a t-shirt.

I don't know about you, but when I was growing up, mustard was always that canary yellow, mild flavored French's mustard.  I didn't know there were any other kinds of mustards until I started seeing commercials for Grey Poupon.  I tried and and discovered that it tasted OK.   Still not what I grew up on.

My mustardy tastes expanded on a trip to Mendocino once when I tasted Mendocino mustard.

Oh...myyyy!  This was a sweet mustard and I loved it.  I bought whenever I found it anywhere and ate it on anything that seemed to require mustard.  When I joined Weight Watchers, I was thrilled to discover that mustard was an OK thing to eat and you didn't need to count points....except for sweet mustards.  Wouldn't you know that with more than 5,000 mustards in the world, I had picked one of the very few that was fattening?

I learned when we would have Cousins Day that my mother has a love for Coleman's mustard, which I had never heard of before, but which I discovered I liked.   To me it tastes like it has horseradish in it (though a check of the ingredients does not reveal that).  It's difficult to find, though.  When she was still living in her house, I tried to buy her some Coleman's mustard, because she always complains about how expensive it is, but none of the grocery stores in Davis seemed to carry it at that time.

Apparently mustard is good for the skin.  The museum sells products for mustard baths (I wonder if you eat hot dogs as you bathe).

The gift store also has a selection of cookbooks, including one dedicated to the aforementioned Coleman's mustard, one called "Mustard on a Pickle" (I'll give one a WIDE berth!) and one called "Habeas Codfish: Reflections on Food and the Law."

You can order mustards with special labels, as a greeting for someone having a birthday...or baby.

To say "Get Well" or "Thank You," nothing says it better than mustard. And to help celebrate the new arrival (the new baby) or the recent welcome departure (divorce), mustard is the greeting that keeps on spreading.

You know, this entry started because I as looking for a quote about mustard because I read somewhere that this was Mustard Day. But I just had the best time ever going through the mustard museum web site.   And there is still more I haven't checked out yet...but this had to be the best

I may have to get myself a yodel pickle...after I brush my teeth with bacon flavored toothpaste, of course. 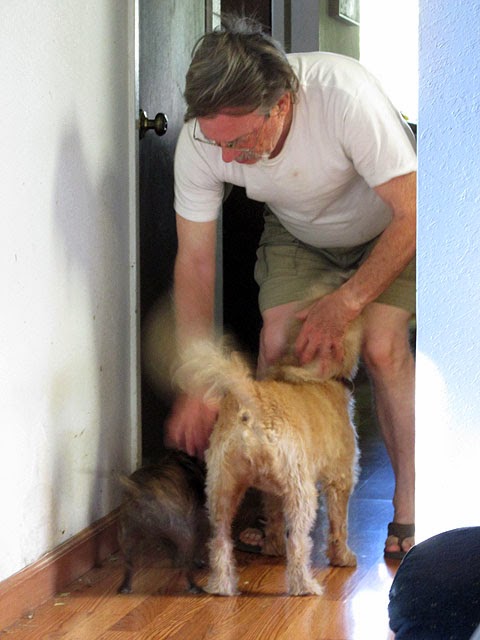 Day 33:  It makes me happy to watch the dogs, tails wagging furiously
greet Walt when he comes downstairs in the morning.

Hadn't heard about this museum but, like you, we love the odd off-beat small museums. We've found some dandies!

I'd love to hear some of your "dandies." We've been to the Jello museum and Jeri went with Walt to the "Elvis is Alive" museum.

There was always a can of Coleman's dry mustard in the cabinet when I was a kid, but I never saw it used. But when I began serious cooking, I found uses for it -- like the base of the accompaniment I prepared for our favorite Chinese dishes.